Sarah Paulson filmed her performance in HBO’s “Coastal Elites” during the thick of the COVID-19 pandemic without any co-stars.

Performing the role alone with only a handful of crew members made her realize how much she loves acting with other people and looking into their eyes, she says. And loneliness wasn’t her only qualm with filming at home: Queso droppings from the craft service table on her deck ended up all over her backyard furniture.

Written by humorist Paul Rudnick, “Coastal Elites” was intended to be a live theater performance. Bringing the role to life alone in her home changed the dynamic in a strange way for Paulson.

“The community of filmmaking or stage work or anything in that world is to me about being with your fellow performers, your crew, your backstage staff, your dressers,” she says. “I mean, all of it is, for me, such a fundamental part of what's enjoyable about it. And so this was sort of lonely.”

Many Americans have experienced her character’s conflict of political differences among family, she says. Paulson’s grandparents were previously supportive of President Trump, but she says she’s “not as brave” as her character and avoids political discussions with them.

People may want to avoid divisive conversations to maintain a loving relationship with family — but then find themselves screaming across the dinner table, she says.

Over on Netflix, Paulson plays a nurse in a 1940s mental hospital who becomes a proponent of the lobotomy in "Ratched,” which drops next Friday. Listed as one of the top 50 movie villains of all time, her character was made famous by Louise Fletcher in the 1975 film “One Flew Over the Cuckoo's Nest.”

"Ratched” tells the origin story of Nurse Mildred Ratched — which was “daunting” for Paulson considering the potential that her performance could disappoint Netflix viewers and fans of the original film. 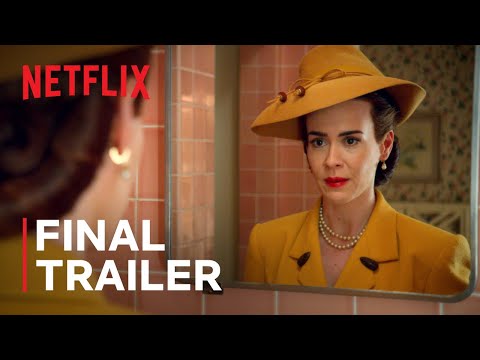 Paulson co-executive produced the series with writer-producer Ryan Murphy, who she’s worked with for almost a decade on shows such as “American Horror Story” and “American Crime Story.” The writer-producer empowered her to take on the title and own a piece of the series, she says.

Murphy felt she earned the opportunity — which she took seriously, she says.

“It suits me, only in so much as that I'm a massive control freak and I think I always have my hands in too many pots on the set,” she says. “And I'm sure it's unpleasant for a lot of people.”

As far as her relationship with Murphy, Paulson says he would need to explain the mystery of why he likes working with her.

For Paulson, the “extreme” worlds Murphy creates gives actors a responsibility to find grounded truth in their roles. From both an acting and creative standpoint, working in this world lets her explore her internal self and imagination.

“I think for whatever reason, I'm able to interpret his desired tone in a way that makes me feel really liberated and free as an actress because there’s sort of like no limit to what you can do,” she says. “It's sort of in the Ryan world, you better go big or go home.”

Paulson doesn’t shy away from taking on iconic roles, whether the characters are based on real people or fictional. She won an Emmy for playing O.J. Simpson prosecutor Marcia Clark in Murphy’s “American Crime Story.”

She sees a parallel between the roles of real-life Clark and Nurse Ratched, a fictional character who was part of a famous movie and seems real to a lot of fans. Playing Clark made Paulson appreciate the value of having a “blueprint” to base her performance on, she says.

Despite the stricter boundaries of playing a real person, Paulson felt a sense of freedom in working with the facts of who Clark was and what the prosecutor brought to the high-profile murder case. For both Clark and Ratched, Paulson says playing well-known characters requires making herself vulnerable to criticism on the success of her performance.

“Sometimes when you're creating something out of whole cloth, anything goes,” she says. “And when anything goes, I can sometimes feel a little bit paralyzed by the possibility of you can choose it all.”

On top of her two upcoming shows, Paulson also plays a 1970s housewife who becomes an assistant to anti-feminist Phyllis Schlafly in Hulu’s “Mrs. America.” While it’s been “dicey” for Paulson to talk about her experience during the pandemic because of the struggles many people are facing, she says this time has served as a breather from working non-stop over the past six years.

Without having to set alarms at 3:45 in the morning to make sure she’s on set in time, Paulson realized how much she values structure and “the ritual of going to work.”

“Now that I have found myself for the last several months not working, it has felt oddly like I'm being given a break,” she says, “but one that feels a little bit disquieting because I sort of swing between that feeling of like am I on vacation? But I'm on vacation in a nightmare?”