It started off in a typical suburb in Phoenix, Arizona.

Mom worked as a teacher and her father was a hippie, stay-at-home dad who occasionally dealt pot, and Jenn said he was incredibly attentive.

"He'd brush my hair and feed me breakfast every morning," she said. "But there were always signs of problems."

Her mother, Lynne Carson, knew something was wrong when her husband, James Carson, began violently threatening anyone who upset him. That included her. At one point, he got a gun and that's when Lynne knew she had to leave him.

In 1979, when Jenn was 5 years old, her parents divorced after a decade of marriage. Shortly after, James Carson remarried and changed his name to Michael Bear Carson. By then, his behavior was even more violent and erratic. Jenn's first visit to her father and stepmother's house is etched in her memory.

"There were no furniture, no lamps, it was dark and there were a hundred potted plants," she said. "It looked like the haunted forest in 'Snow White.' "

Jenn remembers a particularly terrifying moment when her stepmother, Suzan Carson, came into the room and started rubbing her back. She ended up scratching her and leaving five open wounds.

"She was saying things to me like 'I will scratch the demon out of you,' " she said. "It was horrific. You remember when someone is threatening to kill you or tries and harms you in this way."

That visit was the final straw for Jenn's mother. She packed up her small car in the middle of the night, took her daughter, and hit the road. They spent the next four years moving across the country before eventually settling in Orange County, California.

Lynne told her young daughter they needed to be away from her father because he was sick.

Jenn's life at home was tough. Her mother struggled with depression. Unfortunately, school wasn't much better. Jenn was behind academically and constantly got in trouble. Her second-grade teacher once said Jenn was the worst student she'd ever had.

"That was like throwing a match on my gasoline," said Jenn. "My behavior got worse throughout the rest of the year."

At home, she would often see police officers at her door asking about her father. Her mother never told her exactly why and would instead send her to her room. She still heard bits and pieces of their conversations and knew it wasn't good.

By third grade, Jenn was preparing herself for another difficult academic year. She put her hair in front of her eyes to avoid interacting with the new teacher. It was then that the teacher, Mrs. Sylvia Case, did something Jenn didn’t expect.

"I just remember her saying ‘Jenny, I heard you were such a great reader. Why don’t you help me hold the book?' ” Jenn recalled.

That was the beginning of something new. Jenn learned to love books and over the year, she caught up academically. Mrs. Case once brought her hair barrettes as a prize for good grades on a spelling test to help her keep the hair out of her eyes. She also helped Jenn get into the Girl Scouts and apply for reduced lunch when she suspected money was tight at home, which it was.

But there's one thing Jenn remembers the most.

"A lot of teachers would say good job. She would say, 'Your cursive M’s look like art,' " Jenn said. "She would give sincere and specific compliments, and I think it’s one of the kindest things you can do because you’re saying to another human, 'I see you. And I see the goodness in you.' ”

"She would give sincere and specific compliments, and I think it’s one of the kindest things you can do because you’re saying to another human, 'I see you. And I see the goodness in you.' ”

Jenn really needed to hear that at the time. That year, 1983, her father was arrested for killing at least three people, but police suspect he and his new wife had murdered at least a dozen victims.

They included an aspiring actress in her early 20s with whom they shared an apartment. They stabbed her 13 times because they believed she was a witch.

Their string of bizarre and sensational murders earned Jenn’s father and his wife the nickname "the San Francisco witch killers."

Jenn never told Mrs. Case — or any adult for that matter — about any of this. She just remembers going into her class and asking for a hug.

"When I found out that my father was a monster who killed a bunch of people, and my brain started saying, 'You're worthless; You're a bad girl,' I kept going back to Mrs. Case," said Jenn. "She said I was a good girl, and she built a resilience in me that I believe saved my life."

She went on to live a full life, which included going to college, getting a master’s degree in counseling, and now working in suicide prevention.

For a long time, she's tried to contact Mrs. Case to thank her but she was never successful.

When we heard Jenn’s story, we also wondered what happened to Mrs. Case. With some research, and luck, we found her. It turns out the two women only live around 50 miles away from each other. We arranged for them to meet. 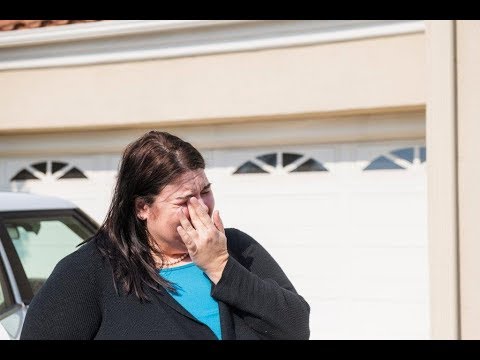 Now an 84-year-old great-grandmother, Mrs. Case today goes by Sylvia Peterson because she was twice widowed.

We drive over to the Orange County retirement community where she lives and when we pull into the driveway and see Mrs. Peterson step out of her house, Jenn immediately gets nervous.

"She looks the same!" Jenn said.

When Jenn finally makes it out of the car, she rushes toward her former teacher and gives her a long hug.

They step inside Sylvia's tidy home, sit on the couch, and waste no time catching up. All the while, Jenn can't stop smiling. She takes out several things from her bag to show her former teacher. They include her Girl Scout badges, pictures from her years at Teach For America, and papers she's saved from third grade — many of which are decorated with compliments from Sylvia.

Jenn tells Sylvia her story — her father’s arrest and how much she and her mother struggled the year she was in her class. She finally was able to thank her former teacher for helping her get through the worst year of her life.

Sylvia tells Jenn she's never thought of herself as a savior of any sort.

"It's just something you do," Sylvia said.

"You weren't just doing your job," said Jenn. "You did it with kindness."

Sylvia thanks Jenn for thinking of her all these years later.

"I felt very emotional seeing her and hearing her story and connecting with her after all of these years," said Sylvia. "I think I'm proud of her like a daughter or granddaughter. I mean she feels like a member of my family."

After a few hours, we say our final goodbyes. Jenn packs up her old pictures and papers and Sylvia tells her to come back and visit. She also tells Jenn she'll add her name to the visitor list at the front gate because, after all, she's family now.