Graduating seniors across the country are undoubtedly feeling disappointed. The coronavirus pandemic has forced schools to cancel ceremonies, proms and trips. Friends and classmates won't get to exchange tear-filled goodbye hugs before moving on to the next chapter of their lives.

Vanessa Clark felt that disappointment deeply. She's the superintendent of Lacey Township School District in New Jersey, and she wanted to do something to celebrate her seniors. After a lot of thought, she called up the township's police chief.

"I said, 'Chief, what would you think if I asked you if you could escort us to visit the home of every single senior in Lacey Township?'" she recalled. "His first response to me was, 'You're kidding, right?'"

She wasn't. Clark gathered a caravan of a dozen vehicles carrying around 20 people including teachers, board members and first responders. Together, they spent 12 hours driving through the township and stopping at each of the 266 high school seniors' homes to honk, cheer and celebrate the graduates. They planted congratulatory lawn signs in front of the houses and left behind a gift bag with some senior swag. 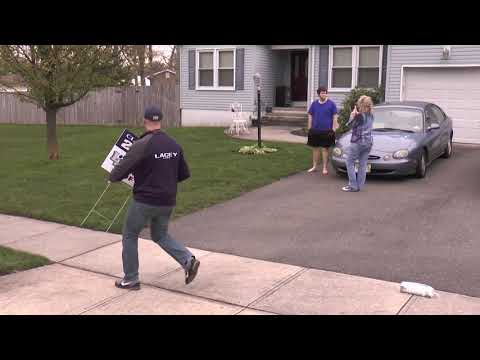 In Clark's 23 years in education, she said she can't think of anything that's been more rewarding than having the entire community rally around the class of 2020.

"It's been the highlight of my career. I can honestly say that," she said.

For some, graduation is a milestone that marks the end of a chapter. For others, it's symbolic of everything they've overcome.

Clarissa McEuen, 27, remembers nights when she'd break down and cry in the shower.

"They were the hardest years of my life," McEuen said. "There were a lot of nights where I put my kids to bed and I'd stay up until 1 [or] 2 a.m., and I'd be exhausted or I would struggle through an assignment."

When McEuen started her bachelor's program in business at Weber State University in Utah, she was a single mother of two working full-time as a paralegal. She'd also just gotten out of a bad marriage.

Growing up, McEuen spent years in the foster care system, often separated her from her four younger brothers. Both of McEuen's parents struggled with substance use and poverty. She married her first husband at 17, but when that ended,  McEuen was determined to build a better life for herself and her children.

"I feel like now my kids have something to look at ... something to build off of," she said. "I hope that they go so much further than I did or I have so far."

Not only has McEuen finished her degree, she was also chosen to give a speech for her graduating class — a once-in-a-lifetime moment she will sadly miss.

"You spend years of your life, nights, days, building up to this moment and to be told that you don't get to walk across that stage. It's just an overwhelming wave of disappointment," McEuen said.

Saturday, April 25, was the day McEuen's graduation was to take place. Little did she know that her now-husband Nate McEuen, whom she married last year, had planned a surprise celebration. That day, he laid out the same cap and gown his wife wore during her community college graduation along with a copy of her speech on the bed.

"He had a bunch of friends, family on Zoom, and he had the graduation music playing," McEuen said. "So he put everyone on mute, and he let me share my speech with everyone."

McEuen said she's grateful for her husband's kind gesture. Despite the lack of pomp and circumstance, her 11-year-old son and 9-year-old daughter still saw their mother in her cap and gown, celebrating a momentous achievement.

"I think as much as I would have enjoyed having an actual graduation commencement at Weber State, this was just as amazing," she said.