A spate of high-profile police shootings have drawn attention to the way police respond to people dealing with mental illness.

Until recently, that response was: Arrest first, ask questions later. But a rising number of police departments around the region — and around the country — are rethinking the way they handle these crises.

In a classroom at the Rhode Island Municipal Police Training Academy in East Greenwich, recruits are learning about mental health first aid.

Retired West Warwick Police Captain Joe Coffey facilitates. He tells the rows of recruits in identical blue uniforms that he understands most of them signed up because they wanted to help people. Seven to 15 percent of the calls they go on, Coffey says, will involve someone who needs help getting through a mental health crisis.

“You’ll get a really good sense of what that help may be," Coffey lectures. "How to identify mental illnesses or people in crisis, how to understand it and, most importantly, how you can help. But after the help we have to connect them to the proper care and services.” 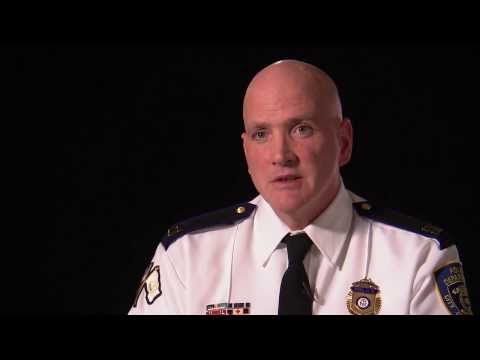 Trisha Brouwer co-facilitates the class with Coffey. Brouwer works for Gateway Healthcare services in Pawtucket, responding to mental health emergencies in hospitals and in partnership with the police.

Brouwer reminds recruits they’ve learned CPR and other physical first aid — mental health first aid is similar and just as critical. That's because someone in crisis might not behave the way officers expect. Knowing how to respond can mean the difference between life and death — between making an arrest or helping the person get into treatment.

“Folks experiencing acute mental health issues aren’t very good at following your directions," Brouwer tells the class. "[T]hat can be misperceived. And you might think that you need to act differently because they’re not responding to you.”

Brouwer and Coffey will teach the new recruits how to respond to crisis situations — anything from someone having a psychotic break to a person threatening suicide. The main idea is to listen, deescalate the crisis, and be a conduit to help.

Once officers complete this kind of training, situations that might once have escalated can turn out completely differently. Take what happened to Meagan LeBeau. Today, she works for the National Alliance for Mental Illness chapter in Rhode Island as an administrative assistant. She also has her own debilitating mental illnesses.

“I have bipolar disorder with anxiety and PTSD [post-traumatic stress disorder]," she says. "And for a while I had agoraphobia, so I hadn’t left my house for about two years. And with the bipolar I have psychosis, so I sometimes hear things or I see things or get very paranoid.”

A few years ago, LeBeau had a psychotic episode. She hadn’t left her house in two years. She hadn’t slept in weeks. She’d taken tons of tranquilizers.

“I called the suicide hotline because I got scared," LeBeau says. "I couldn’t remember how many pills I had taken and I thought, 'I want to live. I want to sleep, but I want to live. Maybe somebody can help me.' And so I called them and they had said, 'OK, well we don't know how many you've taken so we need to call the police and do a wellness check.' ”

When the police arrived, they found her in the bedroom.

Spotting a butcher knife and drugs, another cop might have gotten out the handcuffs. But this officer had shown up without sirens and lights blazing. He simply asked LeBeau how she was. He said he’d take her to the hospital. He even let her get dressed, smoke a cigarette. He’d been trained in crisis intervention.

He treated her like a human being. “Exactly, he did," LeBeau says. "And I think even better than a lot of people would treat somebody who was going through a psychotic break.”

“The next day the police officer came back and checked on me to see how I was doing, to see if I [had] slept.”

She never forgot him.

As of this year, mental health first aid is required training for all new police recruits in Rhode Island. It’s one of the first states to embrace such a requirement.

And more police departments are embedding mental health clinicians directly on their forces. If it works, it could help divert more people from an overburdened criminal justice system and into treatment.