Corrections appended — BOSTON SYMPHONY ORCHESTRA HARPIST Ann Hobson Pilot officially ended her 40-year tenure with the BSO last month, but she said she doesn't feel like she's retired at all.

"It won't feel like that for a few weeks, I think," she said, laughing.

That's because she's been working harder than ever preparing for the premiere of a new work by busy Hollywood composer John Williams. His tribute to Hobson Pilot is called, "On Willows and Birches, Concerto for Harp."

"There's something heavenly — or even divine — if you like, about the harp," Williams said, "I think it has this special connection with the other-world."

Ann Pilot Hobson fell under the harp's mysterious spell when she was 14 years old, because it was so different. She said she was, too.

"When I was coming up, I was an oddity being an African-American harpist, " Hobson Pilot said. "The harp was considered to be first of all a feminine instrument and certainly not an instrument of people of color. I mean the angels played the harp and all of that."

Hobson Pilot's harp playing got her into the Cleveland Music Institute. Then she won a job with the Washington National Symphony, where she was the first and only African-American musician. 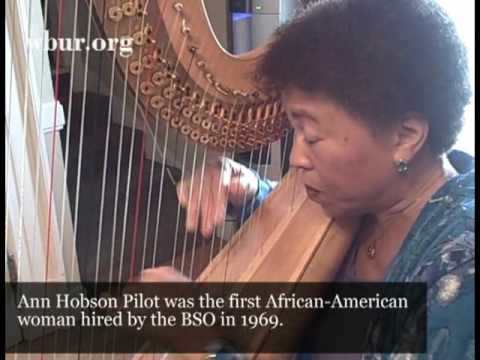 Next, in 1969, Hobson Pilot remembers when Arthur Fielder came to guest conduct.

"And he said, 'We have an opening in Boston for the principal of the Pops and 2nd with the BSO and I like your playing — would you consider auditioning for the job?' "

She did. And she won, recalled Bill Moyers. He played trombone for the BSO when Hobson Pilot got the job.

"When I joined the orchestra in 1952, there was one other person in the orchestra who was a woman," Moyers said. "One. And she was the second harpist. All the rest were men. And there were no people of color."

HOBSON PILOT CAME ON IN 1969. Today, with her retirement, there is only one full-time African-American member left in the BSO. But Moyers is quick to remind me of the blind audition process. It all happens behind a screen and is fully based on musical skill. Hobson Pilot, he said, was hired for no other reason than her beautiful playing.

"She has poetry inside of her," Moyers said. "What more could you hope for?"

The harpist admits she is disappointed by the lack of diversity in the classical music world, but she's not bitter. It's brutally competitive, Hobson Pilot says, and there's a lack of early music education opportunities for minorities.

She's been a role model for school children in Boston, but it's anything but child's play working full-time for a major music organization like the BSO.

"This orchestra plays perfectly," Hobson Pilot said, laughing, "and you know, being a part of the orchestra, you have to be perfect. So for 40 years trying to be perfect has been a challenge."

But BSO Managing Director Mark Volpe said she rose to it, again and again.

"It's an instrument where you can't hide, it's out there, and I don’t remember Anne screwing up," Volpe said. "I mean she's amazingly consistent."

Volpe is not the only one to think that. Composer John Williams has never written a concerto for the harp, and admits he was reluctant to take on the challenge.

"There are difficulties with harp," Williams said. "Limitations, special opportunities, people will understand there are seven pedals and each string can produce three different pitches — it can be a C flat, a C natural or a C sharp at any given time."

But Williams said Hobson Pilot won him over, and he finished the piece.

"I stretched it and I actually wondered if she could play it all," he confessed. "I was surprised that she could — it seems almost like a magic trick to hear and watch her do it."

On stage at Symphony Hall, John Williams rehearsed "On Willows and Birches, Concerto for Harp" with Hobson Pilot. Sitting on a cushioned stool, she embraced her heavy harp with her entire body. Her two feet tapped the seven-foot pedals as her nimble fingers plucked and glided across the 47 strings.

Hobson Pilot said when Wednesday night's concert is over, she'll miss her seat on stage very much.

"Sitting in the middle of that wonderful BSO sound for 40 years has been beyond belief," she said, but added, "I'll be able to sit in the audience and hear it from a different perspective."

Ann Hobson Pilot's final concert with the BSO is Oct. 3 in Boston, but she'll get to kick off the season at Carnegie Hall in New York on Oct. 1.

Corrections: An earlier version of this story, an accompanying video, and the broadcast version of this story incorrectly stated that Gibson Pilot was first African-American musician hired by the BSO; in fact, she was the first African-American woman hired. The earlier story also incorrectly stated the location of Gibson Pilot's final performance; it will be at Boston Symphony Hall on Oct. 3.