Sitting at a grand piano in a practice room at the New England Conservatory, Bruce Brubaker lifts small, crude-looking weights and places them quickly — but delicately — on the ivories, without making a sound.

"The weights that I’m using in this music are actually little stacks of the kinds of metal weights which are already inside piano keys," Brubaker explains.

For the past few years, Brubaker has used these weights to play a set of pieces by influential post-minimalist composer William Duckworth. They're called "The Time Curve Preludes." Depressing select keys with weights was Duckworth's idea. 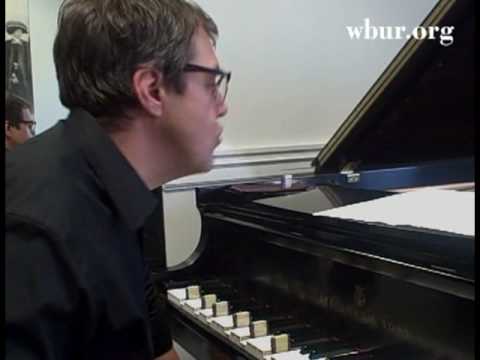 Now Brubaker, chairman of the piano department at the NEC, has embraced Duckworth's concept and compositions for his new CD, "Time Curve." The well-received recording is in the running for Grammy Award nominations in three separate classical music categories.

In the NEC practice room, Brubaker gives me a sense of how the weights change the piano's hue.

"The result is that — after I get them down — when I play some of the piece, you'll hear that there is kind of a halo or cloud of extra ringing sound that is not what would happen if I didn't have the weights there," Brubaker says.

The effect is very, very subtle. But for a lifelong pianist such as Brubaker, it's delicious.

"It turns the piano into something not entirely different than what it was before," he says. "But it is transformed a little bit."

He says it's more palpable on the recording but not necessarily obvious. Regardless, it excites Brubaker because he finds it mysterious.

Brubaker explains that anyone who's familiar with how pianos work might think a similar effect can be created by using the instrument's middle-foot pedal. Like the weights, that pedal sustains certain notes.

"You might wonder: Why not just use that pedal to hold down these notes that are specified by Mr. Duckworth for his music?" Brubaker says. But, "on most of the pianos that I've tried it on, it doesn’t turn out the same."  The weights, he explains, "through some kind of process, produce a sound that is not obtainable any other way."

Plenty of other musicians, including pioneer John Cage, have produced new, sometimes dramatic sounds by sticking all sorts of weird stuff inside pianos, between the strings: screws, pennies, weather-stripping. But manipulating the piano from the outside is rare, Brubaker says.

Adding reverb in a studio could also create a related effect, Brubaker admits, but he appreciates the old-fashioned, low-tech method created by Duckworth. And Brubaker wants to keep it alive.

"I think it's a piece that's been neglected, actually," he says.

Duckworth completed "The Time Curve Preludes" in 1978. It has only been recorded twice and re-issued once. The composition is widely considered to be the first post-minimalist piece of music.

With his new CD, Brubaker hopes to introduce Duckworth's preludes to contemporary audiences. He has also performed "The Time Curve Preludes" in Boston, New York and Los Angeles.

This program aired on October 6, 2009. The audio for this program is not available.