A contest between beach buggies and birds on beaches heats up at a hearing in Boston on Tuesday.

An environmental group wants tighter restrictions to protect the piping plover on Plymouth's most popular beach. But the owners of off-road-vehicles are saying they want their beaches back.

That argument swirls at Plymouth Harbor, an inlet protected from the open Atlantic by a narrow strip of low sandy barrier beach that sticks out three miles. Out toward the point, thousands of birds clamor, dive for fish, pull up worms and invertebrates, sit on nests and feed their young.

People know it as Long Beach. The birds know it as their breeding grounds.

Biologist Scott Hecker has been studying shorebirds on Long Beach for 23 years. 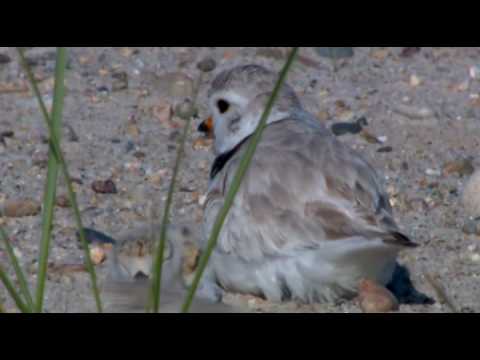 "Ahead on the tidal flat there's a pair of piping plovers with a very small chick. The chick is probably no more than a few days old," Hecker said, pointing out a brown and white cotton ball with a beak scurrying across the flats on orange toothpick legs.

Its parents migrated here from the Gulf Coast somewhere between late March and May and began to nest — right where generations of Plymouth residents used to drive their beach buggies with their own broods.

But Karen Fantasia, of Plymouth, who's here with her son, can't drive out onto the beach today. "The birdies and their nests have taken over the beach and now we're unable to come down to where we used to," Fantasia said.

Fantasia hasn’t been able to drive out since the beginning of June because plovers made a nest close to the entrance where off-road vehicles drive onto the beach. According to the rules, vehicles have to stay 100 yards away from the chicks until they can fly. By that measure, the entrance probably won’t reopen until the end of July.

Fantasia would like to see the birds go away.

"Re-migrate them, put them in one certain place where there’s not a public beach, maybe a shoreline where people don't go," Fantasia said.

Since piping plovers have been migrating here as long as there’s been a beach — which predates the Pilgrims by 5,000 to 10,000 years — relocating them is problematic at best. But relocating the cars has had a dramatic effect and a happy one from the plovers’ side of things.

Under the pressure of state and federal law, and of biologist Hecker, for the last 20 years the Town of Plymouth has had to protect the birds, their nests and their eggs from cars, dogs and people on the beach.

And in that time, Hecker says, the plover population on Plymouth Beach has grown.

Fencing or roping-off plover nests and restricting off-road vehicles has had the same dramatic effect on beaches all over the state, Hecker says. From 1987 to last year, the numbers jumped from 126 pairs to 575 pairs.

And why stop now, asks Hecker, whose Coastal Waterbird Program for Audubon has been credited with that increase.

"I think if the vehicles were restricted further and more protection was given the birds, the number will go up," Hecker said.

That’s precisely what Hecker and his new employer, the Goldenrod Foundation of Plymouth, want to see. At a state hearing in Boston this week, they will argue that Plymouth's beach management plan doesn't go far enough, and the state isn't requiring enough of towns like Plymouth to protect the plovers.

As a result, the Goldenrod Foundation says the town and the the state are violating the Massachusetts Endangered Species Act.

Once again, the one-ounce plover is at the center of a one-ton controversy that's re-opened the wounds of resentful Plymouth residents. One of those is Rich Whelpley.

"We're saying, if it's already succeeding and the birds are coming back, why do we need more regulation?" Whelpley asked. He has organized a petition drive that’s linked to the Facebook page, “Let’s Take Back Plymouth's Long Beach.”

Over 600 people have joined in opposing "all suggestions and demands that will further limit our access to our beach."

Hecker and Goldenrod say that plovers can co-exist with people and that the current restrictions don't keep people from walking on the beach. They restrict cars, though Whelpley and other off-road vehicle drivers say walking up the beach to spend the day with the family is too much without a car.

On the subject of vehicles, the attorney for Goldenrod, William Henchy, is clear.

"Certainly when these birds are present and breeding, there simply in our view is no room for vehicles and the birds to co-exist because the birds suffer when that happens," Henchy said.

According to the federal government, piping plovers are the smallest population of shorebirds on the Atlantic coast.

Its vulnerability is even more apparent in the wake of the catastrophic BP oil spill. Most of these birds winter on the American shoreline of the Gulf Coast. They migrated here before the spill, but they will soon return with their fledglings to beaches that are heavily oiled.

"Considering that the entire 70 percent of the the entire population in the world are in the Gulf, there’s going to be a significant potential impact," Hecker said.

To him, that's all the more reason to try to increase the population of piping plovers here on Long Beach in Plymouth, by increasing chicks' chances of survival. He points to a chick leaving the nest where it's been protected by a rope that fences it off. But the chick passes under the rope and crosses out into the corridor where vehicles would normally be free to pass.

"That's the difficulty to protecting the young," Hecker said. "They have to go outside the rope to get enough food to survive, so they come out of the roping onto the tidal flats to get their food."

So even when vehicles are keeping their proper distance, they can scare the birds and disrupt their ability to find food, says Henchy.

"When birds are present and breeding the science is very clear that vehicles adversely affect productivity and their ability to survive," Henchy said.

It's a direct violation of the state's Endangered Species Act to allow those disruptions, even when they do not inflict direct harm, Henchy claims.

Making that argument at this week's hearings may well increase the population of piping plovers, but it will also intensify the argument over beach buggies in Plymouth.