Concerts and public art installations have long drawn visitors to the Harbor Islands. But a group of Boston-area artists recently pitched tents and went "primitive" as part of a five-day art encampment. In this seventh installment of “Looking Out: A New View Of Boston Harbor,” WBUR's Andrea Shea went along to find out what that actually means. 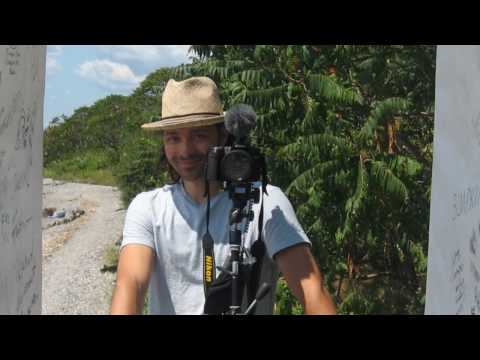 BOSTON — Bumpkin Island is one of three camping islands in Boston Harbor. To get here, you have to take a boat ride from Hingham. On arrival, Roscoe Nicholson welcomes visitors the Bumpkin. He looks dapper, with a sporty hat and tie.

"Welcome to Bumpkin Island Art Encampment, my name is Roscoe," he says to a group of visitors. "The artists that are on the island this weekend all submitted proposals that are in accordance with the Homestead Act, where they will bring only what they can carry to the island, inhabit the island for a long weekend and improve upon the land — where 'improve upon the land' is taken quite broadly.”

Twenty-nine-year-old Carolyn Lewenberg co-founded the art encampment four years ago with artist Megan Dickerson. They both curate, and Lewenberg is also a former island ranger. (The artists here call her a “curanger.”) Lewenberg’s experience helped her convince the Parks Department and the Boston Harbor Alliance to let her organize this annual camping and art-making event.

“You know there’s no electricity, no running water,” she explains while navigating a steep, overgrown path. It’s clear Lewenberg feels right at home with Bumpkin’s primitive conditions. But for the other artists — artists who might usually work inside studios — she says this can be shocking.

“It’s pretty basic, you gotta bring everything to sleep, to eat, your clothes and to make art,” Lewenberg says. “So with those limitations sometimes they don’t get what they expect and it’s really cool to see how the work evolves over the course of five days.”

But Tom Lorring, a long-time volunteer on Bumpkin Island, isn’t sold on how "cool" the idea is.

“Well, I’m not so sure you want my opinion. Well, you’re gonna get it,” he says. A few feet away a DCR ranger chuckles at Lorring's warning.

Lorring leads visitors on island tours and says, “I’ve been here many years and seen many things. I could tell you I’m a little hot and a little cold on the artist encampment.”

This weekend Lorring will walk visitors past more than a dozen island-inspired art installations scattered around Bumpkin’s 37 acres.

“As a person on the outside looking in, and hearing it from visitors who come to the islands, people resent the fact that they can’t get on the island because the island has been reserved for the artists," he says. "So there’s two ways of looking at everything.” And Lorring’s other perspective is that the art encampment is “enjoyable.”

When asked if he has a favorite installation this year, he replies, “Yes, I do. ‘Octopus’ Garden.’ I think what attracted me to it was the shear creativity, particularly in the garb of the artist herself.”

The artist is Marisa DiPaolo, and she’s wearing a skirt made of eight denim legs. Her jean tentacles even have suction cups. DiPaolo invites some cute little girls into her project, saying, “I am your octopus. This is my garden. Welcome.”

Her garden is a huge circle of glacial rocks. The artist collected them, and says octopi actually do something similar in the wild.

“The rocks are arranged in chromatic order,” she says, “red, orange, yellow, green, blue in the center and then purple shells at the end. Kids have really responded to adding rocks to those piles and it’s just seeing how vibrant and colorful the beach right here is.”

Under the relentless sun, DiPaolo has been gathering and rolling rocks of all sizes into her garden for three days. Periodically she takes refuge in a temporary shelter. Sunscreen and hats are critical on Bumpkin. Also water.

Along the ruins of an old U.S. Navy training camp, illustrator and multi-media artist Sharon Dunn laid long pieces of thick white paper on a pathway. She encourages visitors to walk on them.

“It’s a do-or-die scenario for me at times,” she admits. Dunn is a grandmother in her mid-60s and reminds me how she had to lug gallons of water onto the island for the five-day trip to avoid dehydration. This is her third encampment, and she says the physical and artistic challenge is well worth it.

“Every time I come here I see new things," she says. "I’m looking at the gravel and the road in a different way this time and it’s actually come into my work. So you learn things about yourself,” she adds with a laugh, “when you’re struggling to survive!"

“A live Bumpkin hasn’t been spotted on the island for a number of years,” she says. But with an air of authority she assures me that they’re here.

“A caretaker on the island for a long time in the first half of the 20th century had reported seeing them and didn’t get taken too seriously,” she says.

A young visitor named Lydia McCarthy takes the Bumpkins seriously. She and her father came from Roslindale to see the encampment. McCarthy says she spoke with Reed about the Bumpkins. Now I want to see one!

For the encampment Reed is leading “quests” so visitors catch glimpses of the elusive creatures — and their “glowing red eyes."

“It’s like a summer version of an Easter Egg hunt I suppose,” Reed says.

As for the habits of Bumpkins?

"They rest in trees a lot of the time or they’re on the paths where there are plenty of mice and voles.”

I ask if they’re friendly. Reed responds: “Somebody asked me if they’re violent and they’re not, I think. They’ve been marked with a mischievous demeanor but they’re in it to investigate for themselves and they’re not super worried about the impact they’re having any anybody else.”

But the art encampment does appear to be having an impact on the island. On its third day more people came to visit than usually do in a week — many of them artists themselves, making the trip to see what their peers are up to. Oliver Mack, owner of the Fourth Wall Project Gallery near Fenway, called the encampment "magical" and said this was the first time he'd ever come to Bumpkin.

There were many more installations on the island than could ever be summed up here, including a white, floating zeppelin known as the "Bumpkin Sky-Land," a mobile "confessional" mounted on a bicycle, a hidden sculpture recalling the island's former children's hospital and a fluid dance piece featuring two artists rolling their bodies along the jagged shoreline and into the sea.

When all of the encampment artists make it to Day 5 — the final day — they have to pack up everything they brought with them. All materials found on the island must remain on the island — including the rocks in the "Octopus’ Garden."

But the cute little handmade Bumpkins will go back to the mainland for an upcoming art exhibition about the encampment. And, I’m happy to report, while walking along with “curanger” Lewenberg, I actually got to see one!