It's become a regular routine this summer.

A swimmer or a fisherman spots a fin in the water somewhere along Cape Cod or the South Shore. People get worried, authorities are notified, and a beach — or several — shuts down for a few days. It happened last week in Chatham.

During Monday's On Point, one caller, Chris, said he thinks things have changed on the shark front in Chatham over the past couple of decades.

"If there is an available food source, nature adores a vacuum and they'll be in there, feeding upon them," McCosker said.

Right now, experts are still trying to figure out exactly what's happening with the shark population — in East Coast waters and around the world. The toothy predators are ubiquitous in our cultural psyche and our public safety radars. But many simple, practical questions about sharks still don't have answers. How long do they live? How many are there?

Over the past 10 years, scientist and photographer Michael Sholl has taken pictures of 1,500 great white sharks. Now, he's sourcing the public to help him create a data set to track and study great whites.

Scholl wants beachgoers and boaters to send him their pictures of shark fins. He says the pictures will help him recognize individual animals. Scientists have been using tags to do that — but Scholl says that's not optimal for shark-tracking, because tags get covered in algae and fall off.

With sharks, Scholl says, it has to be a little more personal. The marks on a shark's fin show the wear and tear of water erosion and time. They tell the story of a shark's life, and no two are the same.

"Taking a picture of a dorsal fin is just like a fingerprint, it allows us to recognize the individual sharks," Scholl explained.

Some of those pictures will come from researchers — but recent sightings, like one captured on video by a fisherman, are perfect for Scholl, too.

"Those sharks are really not afraid of boats, so if they come up to you, they'll often come within a few meters," Scholl said. A perfect time to snap.

Scholl is collecting pictures of shark fins at info@whitesharktrust.org. 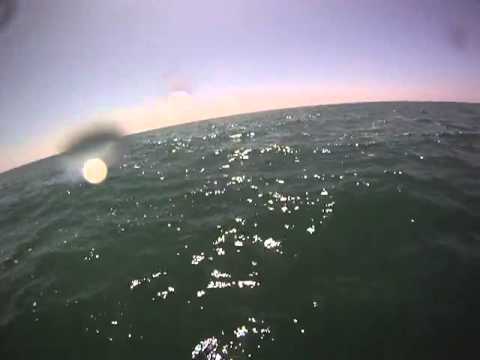 This program aired on August 16, 2010. The audio for this program is not available.