For years, people thought the number of students per teacher was the most important factor in learning. Then educators focused on the size of schools. Now, more and more research shows that teacher quality matters most. But what makes a good teacher?

You might be impressed if your kid's teacher has a master's degree from Harvard's School of Education. But researchers say you should think again.

“The things we think typically matter to make an effective teacher — how many years experience, how many degrees you have, whether you have a degree in this or a degree in that — don't seem to matter much at all,” says Prof. Bob Pianta, dean of the Curry School of Education at the University of Virginia.

Pianta is one of the foremost experts on teacher quality. He’s an education school guy, so you might expect him to stand behind fancy schools. But years of research have led him to see past the ivory towers.

“What we find matters the most is what teachers actually do with kids in classrooms,” he says. “How do teachers interact with kids? How do they deliver instruction? How do they engage them? Those by far outweigh anything about a teacher's background.”

A good teacher has to be a social worker, a manager and an instructor.

The social worker forms good relationships with kids and supports them emotionally.

George Donovan is a master at this. He’s sitting in his fourth-grade classroom at Brockton’s Angelo Elementary School. He and about 20 students sit in a circle.

Every morning Donovan leads a meeting. He and the students all sit in a circle and talk about things like kindness and integrity.

Donovan is keenly aware of the kids’ perspective. So, he gets them to ask questions about what's happening during the rest of the day.

"And there was one other thing that was new up there. Did anyone spot what's new?”

For the first time, the kids are required to do science projects. Donovan delivers the news gently.

“You're going to have the chance to do a science project. It's at the end of the year, I believe in June is when you'll show everyone. It'll be fun, don't get too worried about it.”

Because Donovan gains their trust in this meeting, the kids are willing to follow him into math, science and every other subject, where they know he'll support them, even if they make mistakes. 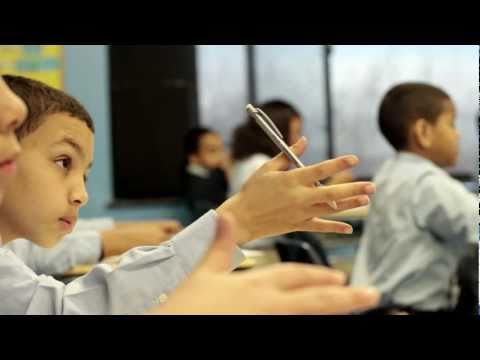 At the same time, he's creating a safe space. A teacher has to be a CEO or manager, according to Pianta.

The teachers at Roxbury Prep Charter School in Boston are great managers.

Marisa Segel teaches English to sixth-graders. In the middle of class, she wants to switch activities and asks them to turn in their homework before doing the next task. This could easily eat up five minutes in another teacher’s class. Kids would drag their feet, pass notes, or chat with each other.

Instead she gives them a very short timeframe.

All of the students participate. And Segel praises the ones working fastest.

“Dante looks eager. Sammy Sosa over there in the back, he looks ready to roll.”

“So, do teachers ... really extend a lesson so that kids have a deeper conceptual understanding of what it is that’s being taught?”

In Segel’s class, there's more time for learning and less chance for distraction.

In addition to playing a social worker and a manager, a good teacher has to do a third thing: they have to teach. They should know their subject really well. Pianta says they have to stretch a child's thinking, reasoning and problem-solving.

“So, do teachers just focus on a yes-no answer, or do they really extend a lesson so that kids have a deeper conceptual understanding of what it is that's being taught?" he asks.

Ed Ballard gets epiphanies big and small from his third-graders at the William E. Russell Elementary School in Boston. He taught fractions by dividing up a big imaginary brownie represented by construction paper.

The kids knew how to name each fraction, but he had yet to teach them how to add them up.

“How many fourths am I holding?” he asks, kneeling down by a group of students working at their desks.

“What would be the equation for what I’m holding?”

“One-fourth plus one-fourth," Ballard says. “But what’s another way to say this?”

The kids aren’t getting it. But they’re engaged. Finally he picks up two imaginary brownie pieces and puts them together.

“When you have two one-fourths you can say two-fourths,” Ballard explains.

Another girl stands up and says, “I’m doing that too!”

According to Pianta, truly excellent teachers play all of these roles together: the social worker, the manager and the teacher.

Of course, no list is finite when it comes to defining a good teacher.

Teach For America, the nonprofit that trains recent college grads to teach in under-performing schools, says good teachers have a certain attitude.

The group studied its most effective teachers and produced a rubric to help others.

“Our best teachers as leaders walk in and set big visions and goals for student outcomes,” says Josh Biber, the executive director of Teach for America in Greater Boston. "They then invest their students and motivate those students in that vision. And they also invest anyone else involved."

He says good teachers also plan relentlessly. And if a plan's not working and kids aren't learning, they're not afraid to start over again.

Even though groups like Teach For America are investing in this kind of research, and professors like Bob Pianta have evidence of what works, there's no common language in most schools to describe these behaviors. And there's no metric for measuring how well teachers display them.