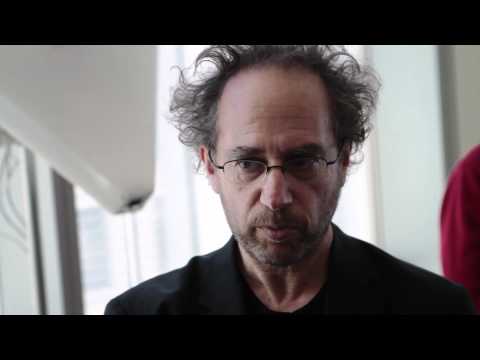 The Los Angeles Times called Tod Machover the country's "most wired composer." He's widely recognized as one of the most innovative composers of his generation. For three decades, he's astounded the world with his avant-garde musical explorations, culminating two years ago when he staged an opera with robots. Machover is also an inventor changing the way people make music. His innovations were the springboard for "Guitar Hero," the musical video game. He's the first artist in WBUR's series "Visionaries."

BOSTON — The first thing most people notice about Tod Machover is his crown of brown curly hair. He only wears black — black T-shirts, black tennis shoes, black tuxedo jackets. The 58-year-old leads the Opera of the Future program at MIT's Media Lab, where he and a team of graduate students invent new ways to make and experience music.

Their mission is audacious: To improve health and save music.

Machover started the program in the 1980s, around the time he invented "hyperinstruments" — hybrids combining instruments with computers.

The world was introduced to the "hypercello" in 1991 when Yo-Yo Ma debuted one of Machover's hypercello compositions at Tanglewood. Sensors on Ma's wrist and cello measured the angle and weight of his bowing and sent the information to a computer to interpret and respond as if it were another musician.

"It's somewhere in between being a performer, a composer and conductor," Machover says. "What comes out can be beyond what I can play with two hands." In other words, instead of playing just one melodic line, the hypercellist can play melody and a full accompaniment.

"Like a lot of things I do, it was controversial and discussed," Machover says. "I think definitely some people felt, 'Oh my gosh, this is classical music and tech. How could you do this to an acoustic cello and Yo-Yo's got a thing on his wrist?' "

This urge to shake up musical performances still drives much of what Machover does. He became obsessed with how music is made after hearing The Beatles album, "Sgt. Pepper's Lonely Hearts Club Band."

"Here was this incredible album that came out, and it was the first album The Beatles did that was consciously designed not to be played live," he says. "Because it had so many layers of sound and every little bit was mixed in the studio, where you could take all the time you need to get it just right."

As more and more music is produced this way, Machover says we have become alienated from music, because people don't learn how to play music like they used to.

"If you don't make music yourself, in some way, it's very hard to have the full pleasure and the full power of listening to it. The connection isn't the same. And if you don't know how to focus when you're listening, something is really lost."

Machover started thinking more about how to teach people to create music when his own daughters were toddlers. So he invented toys that could help kids explore musical concepts without knowing the technical stuff.

Then he and graduate students in his lab designed a computer program called Hyperscore, which Machover says was the "real light bulb."

Hyperscore is an easy-to-use software program using lines and colors to compose music. You don't have to know the rules of music theory or notation.

"You just have to start," Machover says. "And with a little bit of guidance you can make incredibly sophisticated things and learn to make them better and better."

Machover recognized the positive effects of making music: improving cognition, decreasing stress, and boosting self-esteem. So he started to explore the therapeutic potential of Hyperscore and his hyperinstruments.

"They all had something they wanted to express. They were just bursting," Machover says. "I just couldn't believe it."

Dan Ellsey, 37, signed up for workshops with Machover. Ellsey was born with cerebral palsy and has lived at Tewksbury Hospital for 14 years. He can't speak or walk. His arms are essentially useless. But using a sensor Machover and his students made for his forehead, Ellsey composes and conducts using Hyperscore.

"I feel like I'm a musician now," Ellsey says. "I can help the people and teach them how to use Hyperscore."

Machover, his wife and teenage daughters live in an 18th-century home in Waltham on an open plot of land with chickens and goats. Machover chose the property because it included an old barn he could renovate for his composer's studio. He says he needs this kind of retreat to be creative.

"I think one of the reasons I went into composing in the first place was because for me it's the activity where you can really follow your imagination unfettered," he says. "I love having time to myself where I don't have to explain what I'm doing to anybody."

It was here at the barn where Machover created some of his most important work. He got the inspiration for "Death and the Powers," the high-tech opera about an aging millionaire who uploads his brain to a computer before dying. For works like this, Machover had the luxury of dreaming by himself.

But he's just embarked on a project that is deliberately public, one that gets at the heart of his mission to connect people back to music.

"I've done some scary projects — scary to me — and this is maybe the scariest," Machover says.

Machover is writing a symphony with the whole city of Toronto. Or, as many Torontonians as possible.

"Our goal is 10,000 people," he says. "Not a million people. But to have 10,000 people actively involved in the website contributing in some way. I'd like to feel like I have some relationship with these people and vice versa for it to work."

Each week Toronto residents will submit thoughts, impressions and sounds that represent their city. Machover will use this material to write music and share it with them for review.

He's still not sure how it will come together, and acknowledges this might not be world-class work. But if it gets ordinary people to create music, he says it will be a success.