If you promise me I can live another 100 years, with what’s left of my sanity intact, I’ll promise you this: I’ll finish reading Proust’s “Remembrance of Things Past” and I’ll try really, really hard to get with the program about the greatness of Gilbert and Sullivan operettas.

I mean, I sorta get it. The two were forerunners of Marx Brothers irreverence; musical comedy marrying jaunty music, smart lyrics and sweet ballads; and, making political satire palatable to a mass audience. And when Gilbert and Sullivan are done right, you can catch the whole spirit of intelligent silliness and witty irreverence mixed with a kind of dance hall joyfulness. And I’ve seen a couple of productions – D’Oyly Carte’s “H.M.S Pinafore” and the Public Theater’s “Pirates of Penzance” – that make you realize how trail-blazing the two men were and why they’re still fun. Ditto, Mike Leigh’s biographic film, “Topsy-Turvy.”

Most productions try so hard, though, to make Gilbert and Sullivan relevant to today’s world that they make genius look inane – the Huntington Theatre Company’s attempt of a couple of years ago to wed “Pirates of Penzance” and Johnny Depp movies being Exhibit A. And despite a cast featuring two wonderful performances, the Lyric Stage Company of Boston’s current production of “The Mikado” (through Oct. 13) is Exhibit B.

The humor is all from the Johnny Carson-Jay Leno inoffensive school of political satire.

Not that it isn’t pleasant enough. Spiro Veloudos’s direction is as solid as it always is in his chamber musicals. Janie Howland’s set captures ancient Japan (and is that the Citgo sign we see sticking up in the middle of it?). Jonathan Goldberg’s reimagining of the score for a chamber group is fine (though the mix drowns out the singers in some of the ensemble work). The singing is solid, and in the case of Leigh Barrett’s Katisha and Erica Spyres’ Yum-Yum, it’s heavenly. I have been under Barrett’s spell from the first time I heard her, but here she makes the vain Katisha the most likable person onstage, which is magic indeed.

One of the problems, though, is that Barrett, Spyres and the rest of the women are the only singers who can act worth a damn, at least in this production. All the men veer from the ludicrously over the top Timothy John Smith’s Mikado to the bizarrely bland Bob Jolly’s Ko-Ko, the Lord High Executioner. Jolly’s singing matches his acting.

And that’s not the worst of it. Because Gilbert and Sullivan can seem dated or oblique to a modern American audience the temptation, as we said, is to modernize. It’s a temptation that should be resisted, unless you have better ideas than we see here. There’s a pronouncement written by the title character that ends, “I am the Mikado and I approve this message.” A self-proclaimed Republican advises Ko-Ko that stimulating the economy will be the best way to line his pockets. There’s a reference to the Tea Party Mormon who preaches from 10 to 4.

First of all, none of the updating is particularly funny, except for a reference to Texas’s proclivity for capital punishment. Secondly, it’s all from the Johnny Carson-Jay Leno school of “let’s have one joke at the Democrats’ expense and another at the Republicans’ expense (even if it doesn’t have anything to do with political reality — witness the Republican praising stimulus spending). Then everybody goes home happy.” And the message, itself, is pretty repulsive — all politicians are corrupt; government is the enemy. That kind of thinking is the problem, not the solution. Such humor is nothing but easy cynicism, which, unfortunately, is not really being untrue to the source material.

W.S. Gilbert, himself, was a vastly overrated satirist. Here’s what Lincoln Allison has to say on the subject in a review of a couple of books about the pair:

When Gilbert considers the House of Lords, he sounds like a liberal, but when he considers democracy he sounds like a skeptical old Tory. In short, he's a middle-of-the-road liberal-conservative of the ‘It's all bollocks, mate’ school of populism.

In its own context, it’s easy to enjoy the sendup of Victorian mores, particularly of pompous politicians. Arthur Sullivan’s music, of course, adds to the wit. When it’s ripped out of context, though, the impression is merely that the Mikado has no clothes.

Here, by contrast, is how the Lyric sees the production: 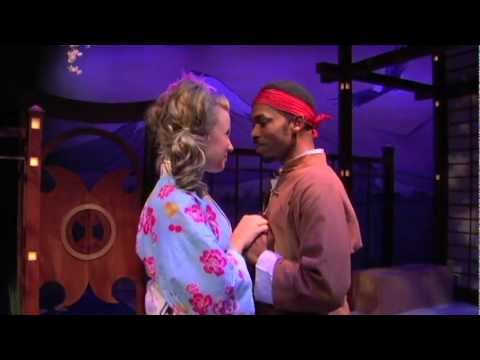 This program aired on October 2, 2012. The audio for this program is not available.