Between school work and friends, a 16-year-old girl from Marblehead is taking the folk scene by storm.

Hayley Reardon says she first picked up a guitar during the summer before sixth grade because she was bored. Her dad showed her some chords, and pretty soon after she started writing songs.

Reardon's debut album, "Where the Artists Go," will be released on Oct. 23, with a release party and performance at Club Passim on Oct. 21.

She recently spoke with WBUR Morning Edition host Bob Oakes about her music.

Bob Oakes: So where did this voice come from?

Hayley Reardon: Kind of like, bottled up. It came from silence, sort of. I was so quiet and so shy leading up to when I started writing songs. That first summer when I picked up a guitar, I kind of spent the whole summer writing as many songs as I could, and making up for all the things that I was always too scared to say. And so my songs are kind of the things I don't say out loud and things that I hold back.

I definitely still get nervous. In all other aspects of life, I'm still kind of scared and shy, but when I'm on stage and when I'm performing and when I'm writing my songs is when I kind of feel like I can say whatever I need to say.

So I'll write songs on the walls that hold me back. No, I can't break em down, but some words fit through the cracks.

A lot of your songs are about your experiences or the experiences that your friends go through. Do your teenage friends come up to you and tell you, "Geez girl, you nailed that"?

Sometimes, yeah, definitely. That's really cool for someone to come up to you and be like, "I've been through that, too." And with me as a music fan, when you find a song that you're like, "Oh my God, they wrote this about me." It's a weird thing because no one had the same experience, but you feel like it's for you and it's cool.

Along those lines, I want to ask you a couple of questions about another song on the CD titled "Tribe," but first let's hear a little bit of that: 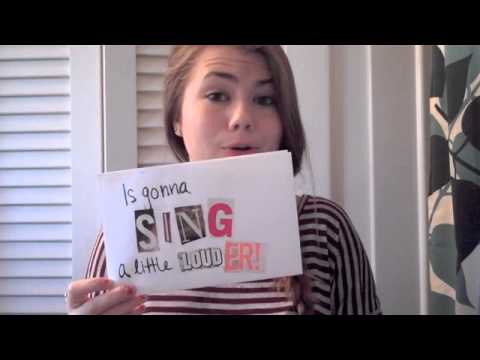 Hayley, I'm the dad of three daughters who were teenagers not that long ago. And when I heard that song, I heard echoes of my house past — a little loneliness sometimes by those girls as they tried to find themselves and tried to find where they fit. Is that what you're trying to say in here?

Yeah. I feel most connected to this song on the record. I feel like it's just kind of a teenage girl anthem in general. It's about looking for the group of people, your tribe, who accept you for who you are, and that really want you to be who you are. There's a little loneliness in it, definitely, and feeling like you don't belong and feeling like nobody gets it and you're different. But there's also hope in it that there are people out there who get it.

You're not alone, never alone little girl. You see our blue blood it sparkles with this art and words written up and down our arms. And we are young. Yes, you belong little girl.

When you were 13, you wrote a song called "She's Falling." It's about bullying and it's dedicated to Phoebe Prince, the girl from South Hadley who took her own life a few years ago after being essentially tormented by bullies at school:

'Cause she's trying to ignore the pain. It's no wonder she only wants to leave this place. And their words and lies and memories are spinning 'round and she can't breathe. She's falling.

Hayley, what made you want to speak out against this?

This song is actually really personal. It was kind of one of those songs that I wrote just to work through an issue, not really to share with anyone.

And that's when I stumbled across Teens Against Bullying, which is a branch of PACER Center, which is the organization that I work with on this kind of stuff. And I found a lot of comfort in their website and loved what they were doing and so I sent them the song and just a thank you saying that you guys really helped me out in a situation.

And they loved the song and they were like, "Can we send this out as part of a classroom toolkit to schools across the country?" And the response to that was really overwhelming. All of seventh grade I spent coming home from school and getting emails from kids telling me their stories or about how they've been bullied or their friends have been bullied or they've bullied kids themselves. And that's kind of what made me realize that it can't be a personal song that I keep in my bedroom drawer anymore and that it kind of needs to be shared.

I don't know what I say. I just like to think about stuff a lot. I spend a lot of time thinking about everything and analyzing the world around me and that's it. So I don't know whether it's maturity, it's just kind of over-thinking all the time.

You're still in high school, a sophomore right now? What comes after high school: college or full-time music, following that muse?

I don't know, it depends where I'm at senior year and how things are and whether I want to go do this for a little bit or do college for a little bit or do both. I've been through eighth grade and high school doing this music stuff pretty seriously and been able to balance both. So take it as it comes. We'll see.