WBUR reporter Andrea Shea recently went on a person-to-person cultural tour — one of the few ways Americans can travel to Cuba — to document the country's vibrant arts scene.

She paired up with a Boston-based music professor and ethnomusicologist on a five-day exploration of Havana’s rich music scene. They discovered some major surprises.

Berklee College of Music professor Bill Banfield knew he'd find music on the streets of Old Havana, he just didn’t know how much. On our first full day we run into a guitarist singing about the Cuban Revolution. Bill saddles up next to him and does his best to sing along.

In the U.S. people walk by street musicians, but in Cuba it’s a state-licensed job. If you stop to listen, you’re expected to pay, and musicians are around every corner. Let’s just say Bill is in heaven.

"Crazy! Over the Moon and freaking Saturn," Bill gushed, explaining the significance of street players in Havana's musical ecosystem. "'Cause they sing the songs of the people."

When Bill hears chamber music coming out of an ancient church he stops in his tracks. Inside, he’s floored to see Zenaida Romeu, a famous Cuban conductor, rehearsing with her all-female orchestra, free and open to the public. Banfield compares it to stumbling in on Leonard Bernstein.

Bill's agenda for this trip includes jamming with a lot of Cuban musicians. He even brought along his new crimson rose colored Epiphone guitar. But as an educator and ethnomusicologist with a focus on the African diaspora, he also hopes to make authentic connections with Cuban people. He wants to learn about their lives and plant seeds for future collaborations.

It's like the professor tells his students at Berklee, "Milk doesn't come from a carton, it comes from a cow.

"I think it's the same with art and culture. It doesn't come from an Internet website, it doesn't come from 'American Idol', you know, art and musical expression come out of the living lives of people," Bill continued. "When you go to a place that sees that up at the top of the human codes, that's extraordinary."

Musicians here have a kind of diplomatic immunity. They're like cultural ambassadors with a universal language.

A Chamber Orchestra To Hip-Hop

Our first musical ambassador, Edgaro Gonzalez, is a rapper, producer and member of the Cuban hip-hop group Doble Filo.

Edgaro joins us on the tour bus and he and Bill hit it off immediately. They met via email, but now they're talking like old buddies about the blues, salsa, American jazz and Cuban pop. Edgaro explains how Cuba's isolation has forced musicians to improvise their own sound.

"And that I find fascinating about Cuba, because it's out of the lack of information [that we get] this crazy mixture of things," Edgaro said.

"But that whole thing is a formula for Cuban survival across the board," Bill added.

Edgardo, Bill and I head to La Zorra y el Cuervo — or The Fox and the Crow — a famous jazz club. When we get there the hip-hop artist arranges for Bill to perform with some young, A-list Cuban musicians. Bill climbs on stage with his new guitar and plays a few American jazz standards. He is hoping to forge relationships with musicians like the guys he’s on stage with.

The next day when we go to the Instituto Superior de Arte, or ISA, we meet 34-year-old pianist Denis Peralta. As our next musical ambassador, Denis connects Bill to school administrators, but also throws together a last-minute jam session on campus. 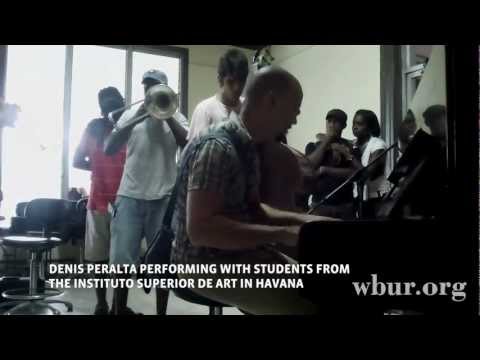 We follow him to a large common room filled with more than a dozen young Cuban musicians. Some are here just to catch a glimpse of the American professor from Berklee, others are showing him their chops.

Bill pulls his guitar out of the case and plugs into an amp. Then he jumps onto the piano and finds his groove with an amazing 20-something flute player.

Everyone is smiling. When it’s over, a brilliant trumpet player, named Jeffrey Valdez, approaches Bill to say he'll be touring the U.S. this year.

"I would like to invite you to one of our shows, I’m playing with some bands in Boston," the 29-year-old told him. Valdez has been playing his instrument since he was 10.

All of the musicians here seem to know about Berklee College of Music. In fact, Denis, a professional composer and musician, received a partial scholarship to Berklee last year, but couldn’t afford the remaining $40,000 for tuition.

Music school in Cuba is free but, Denis says, it's very expensive to sustain that.

"My school, ISA, for example, each musician uses an instrument given by the school — an instrument to learn and to play. They need pianos and all the equipment," he said.

Off The Tourist Track

Bill sees this visit to the Cuban music school as the beginning of a long-term relationship. But as satisfying as that is, the explorer wants to go deeper. He hopes to find something way off the tourist track. And we do.

A few hours later, Bill, Denis, Edgaro and I go somewhere that was not on the professor’s itinerary. Not even close. It's kind of like finding the dodo or a musical holy grail.

We discover the band Hypnosis, playing Cuban-style industrial/emo/heavy metal, at a government-run rock club in central Havana. All five members of the band have hair down to their knees. They're clad in leather. We’re here because Edgaro’s girlfriend, DJ Joyce Alvarez, known as BJoyce, opened for the band. Bill, a classically trained jazz musician and composer, is way out of his element.

When we get out of the club, I ask Bill what he thought of the Cuban rock.

"Fabulous. I wouldn’t have known that I was in Cuba with that. They had learned, copied, emulated or appropriated all of the nuances and the style and the techniques. They had all the equipment," he said. "So they were thrashing baby, they were hitting in hard. I would never have imagined."

When we leave the rock club at 1 a.m. we can’t find a cab, so Denis takes us to another place tourists never go — on a ride in a Cuban cab. There are two types of cabs in Havana, just like there are two types of pesos: one for Cubans and one for tourists. Denis directs us to dark street corner and tells us to be quiet. A geriatric, 1950s era American jalopy pulls up and we get in.

Even though he’s totally freaked out walking through central Havana at night, Bill feels like accomplished what he came here to do — with Denis’s help.

And like an old friend, Denis makes fun of how nervous Bill was in that uncharted cab ride.

Denis says five days is not long enough to experience all of the music Cuba has to offer, so Bill has plans to fly back in February.