A new exhibition featuring some pretty wild objects known as Soundsuits just opened at the Peabody Essex Museum in Salem. Picture elaborate costumes that cover every inch of the body, fashioned from “found” stuff — everything from twigs to fur to buttons to toys, even brightly dyed human hair.

When you first walk into the museum gallery you come face-to-face with two human-sized costumes, but visitors can’t wear them. Instead, these Soundsuits are static beings, frozen in time and posed like mannequins. One features a vintage funeral wreath instead of a face. Another is festooned with an array of colorful handbags sprouting from its torso and beyond.

In these incarnations the Soundsuits function as sculpture.

Mosey into the next room, though, and you can see them burst to life in floor-to-ceiling videos conceived by Nick Cave. His studio assistants are inside the suits, and he is too. They slink, sashay, leap and wriggle throughout the frame.

Oh, and in case you're confused, this Chicago-based artist is not the Australian musician of the same name.

"Yes, there’s two of us that exist in the world creatively," the artist said with a laugh.

Wearing jeans and a black hoodie sweatshirt, this Nick Cave says the kinetic, filmed performance and video soundtrack energize and transform his Soundsuits.

Some of them look like rolling cheerleader pompoms. Or tribal animal spirits. Or Cousin It from "The Addams Family."

You can catch glimmers of the human forms hidden inside — a hand here, a jutting hip there. In one scene a group of hairy, Technicolor, Wookie-looking creatures bounce up and down on pogo sticks. Their long, shimmering hair shoots out in all directions, like paint splatters.

Pretty much anything is material for Cave’s Soundsuits. The 54-year-old artist and Alvin Ailey-trained dancer has been foraging, recycling and repurposing since he was a kid.

"I was always a maker,” he said. "I would always make things with my hands."

Cave grew up in Fulton, Mo. As one of eight boys, he even redesigned his hand-me-downs.

"I would cut the sleeves off, or add something to the surface," he said. "So it was thinking about, how does one establish one’s identity being raised in a sort of lower-middle-class family, and not having much but realizing that the surplus around me was enough to keep my interest."

Cave loves to incorporate the piles of stuff he finds in nature, on the street, or at antique flea markets. "What’s powerful about that is that you know you can make something out of nothing," he said. 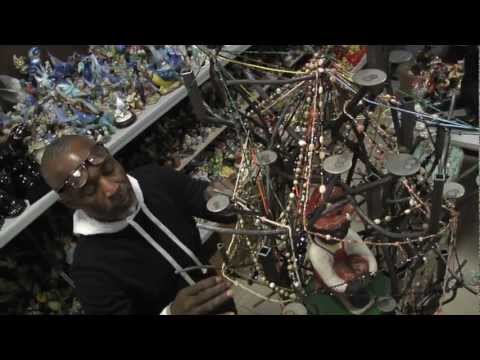 But the Soundsuits’ power comes from a deeper place. Sure, they can look whimsical all covered in old buttons, handbags or toys, but they actually sprang from a dark period in America’s history.

Cave made his first Soundsuit in response to the brutal 1992 beating of Rodney King in Los Angeles. In the aftermath the artist recalls sitting on a bench in Chicago’s Grant Park. He said he was searching for a material that would help him express his confusion.

"I was thinking about, well, you know, I’m a black male. I don’t know what it’s like to feel discarded, dismissed, devalued," he said. "And, you know, I was in the park and I was really sort of going through this emotional struggle with that incident and my own sort of identity. You know, the moment I leave my house I could be a victim of circumstances, you just never know."

Then he looked down and saw a twig. It was "something that I walk on, something I dismiss," he said, "and it just sort of clicked."

Cave gathered up more twigs while reflecting on the media’s portrayal of King, "and how they brought description to his character — 'larger-than-life,' 'it took 10 men to bring him down,' 'scary.' I just started thinking, what does that look like in my head?"

It ended up looking like a suit made of twigs. The maker meticulously drilled holes in the delicate tree parts to create a massive object.

"But I didn’t even think I could put it on the body," he admitted. "And then once I stepped into it I thought about building this sort of second skin, you know, a suit of armor, something for protection purposes. Then I started thinking about protest. In order to be heard you’ve got to be aggressive, you’ve got to speak louder."

In other words, you’ve got to make sound — hence the name Soundsuit.

Cave has made more than 500 of them over the decades. They've found homes in museums, galleries and private collections, and sell for anywhere between $90,000-$150,000.

And the Soundsuits do make noise when the materials rub together, but movement and music amplify the effect. That's why Cave orchestrates videos of his sometimes-cute, sometimes-creepy-looking creations in action.

"They are sort of bigger-than-life, and you’re confronted with that," he said. "There’s this sort of tension, this sort of conflict around fear and attraction at the same time — which is sort of crazy that we’re drawn that way, and exist in the world that way. But you know at the same time we’re hiding gender, race, class. You’re forced to look at the work without judgment."

"It’s both familiar yet strange, it’s almost like a science fiction thing," he explained. "There’s this term from science fiction — humanoid — where on the one hand you recognize that a person is standing, or could stand, inside. But on the other hand once you’re inside you’re completely disguised, and you wonder what it would feel like to be in that, or what such a creature would be, or move like, or feel like."

Which is exactly the kind of response Cave hopes to hear.

That said, the artist says he won’t be making his signature Soundsuits anymore — at least not for a while. Cave wants to collaborate and express his voice in other ways. He's percolating some rich ideas that involve his growing collection of big, ceramic dogs. And later this month Cave is staging an open experiment with the Alvin Ailey dancers in New York. The artist calls it a "lab" where for one week they’ll herd giant raffia horses through the commuters in Grand Central Station.

The last of Cave's suits will be on display at the Peabody Essex Museum in Salem through May.

This program aired on March 4, 2013. The audio for this program is not available.