U.S. Rep. Edward Markey looks into the camera – coat, but no tie, a group of young office workers tapping away at computers behind him.

"It’s hard to believe," he says, in the first television advertisement of his U.S. Senate tilt with Republican Gabriel Gomez, "but 20 years ago almost no one had broadband. Smart phones hadn’t been invented yet. Facebook, Skype, Google – the stuff of science fiction."

The ad generated some snickering on the GOP side when it first aired — a few operatives conjuring Al Gore’s ham-handed claim that he was a father of the Internet.

But the TV spot and, more importantly, the claims at its heart, have gone largely unexamined in the Senate race.

It is a striking omission. The ad, after all, refers to the signature accomplishment of Markey’s career – the Telecommunications Act of 1996, which has shaped the way Americans consume news and entertainment in profound ways.

And its passage is Exhibit A in the underlying case for Markey’s candidacy: that he is a seasoned and principled legislator who can get things done.

With the Telecommunications Act, the Democratic lawmaker most certainly got something done.

But a close examination of the law reveals a more complicated — and mixed — legacy than Markey's ad suggests.

Markey, of Malden, had already established himself as an important telecom player by the time the bill passed.

A member of the powerful House Energy and Commerce Committee, he became chairman of the panel's telecommunications subcommittee in 1987.

And he made it clear, early on, that he wanted to see more competition in an industry dominated by monopolies and near monopolies.

In 1991, he hauled a satellite dish into a committee hearing and declared it the future – a way to break the cable companies’ hold on American living rooms.

A year later, he won passage of a bill that launched the satellite television industry in the U.S. and attempted to rein in soaring cable television bills.

And by 1994, he was working on a bigger project: a sweeping overhaul of the nation’s 60-year-old telecommunications law.

At its heart: a grand bargain that would allow regional telephone companies – the so-called "Baby Bells" – to get into the long-distance and cable businesses, in exchange for opening up local telephone service to competition.

The bill passed the House by a wide margin. But it collapsed in the Senate. And the defeat, for Markey, was a bitter one.

Speaking before technology executives that fall, he blamed the "hypocritical" and "greedy" Baby Bells for the bill’s demise. And he suggested the measure — the signal accomplishment of his career — might never resurface.

"I wonder whether we’ll be able to find the magic again, because what was possible right now has been lost for the nation," he said, stepping down from the podium at the close of his remarks and heading straight for the exit.

President Bill Clinton, wielding a digital pen now mounted on Markey’s office wall, signed the Telecommunications Act of 1996 into law on a winter's day at the Library of Congress.

"Today," the president said, "our laws will catch up with the future." 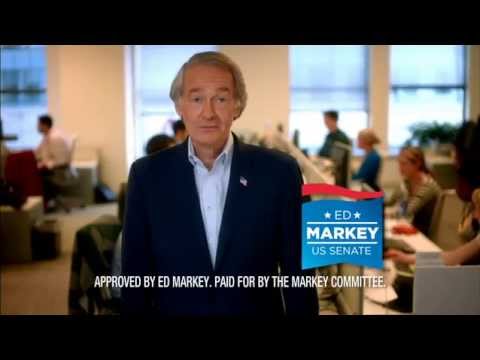 The bill Clinton signed  looked quite different from the measure Markey helped push through the House just two years prior.

And there was a reason for that.

The Republican Party, in the wilderness for 40 years, had taken control of the House of Representatives in November 1994.

And while Markey’s push to bring competition to the cable television and telephone industries remained intact in the 1996 bill, lawmakers added major new elements to the legislation.

Congress repealed the cable television rate regulation Markey helped impose in 1992. And it initiated a major shakeup of the American mediascape – eliminating the cap on how many radio stations a single company could own and allowing for greater consolidation in the television industry, too.

Markey was leery of the new efforts. And in one instance, he served as a brake on GOP bill writers.

Prior to the act’s passage, a single company could own television stations that reached just one quarter of U.S. households.

The bill, as drafted, raised the cap from 25 to 50 percent. But a Markey amendment pulled the figure back to 35 percent and reinstated a ban on any company owning both a television station and cable franchise in the same market.

He made his mark in other ways, too. Some more successful than others.

Markey's so-called E-rate program still provides for Internet access at schools and libraries across the country.

Television manufacturers also must insert a V-Chip into every set, allowing parents to filter out violent television shows. But the feature, which Markey relentlessly flogged, is little used.

The broader aim of the Telecommunications Act of 1996 was to increase competition, drive down prices and create jobs.

And analysts say the bill has not fared well on those fronts — certainly not in the way lawmakers intended.

The local telephone competition Markey and others envisioned never really took hold. Big investment in the sector in the late-1990s created a bubble that burst in the early 2000s.

Elsewhere, the legislation kicked off a big wave of mergers.

Before the Telecommunications Act, for instance, companies could own just 40 radio stations across the country. Clear Channel, the biggest player in the industry, now owns more than 1200. Consumer advocates say the consolidation has been a blow to localism and diversity of opinion.

"You can get in a car in Maine and drive all the way to California and hear the same Top 40 songs on the same chain broadcasters," says Todd O’Boyle, program director for the Media and Democracy Reform Initiative with good government group Common Cause.

The options on cable television, by contrast, have exploded. Consumers now have access to hundreds of stations offering up cooking lessons, "Mad Men" and presidential politics.

But cable television providers retain near monopolies. And consumers face ever mounting bills.

The Federal Communications Commission recently reported that the cost of basic cable service has jumped 6.1 percent per year between 1995 and 2012 – that’s compared to a 2.4 percent annual hike, over the same period, in the Consumer Price Index.

The cable industry blames the handful of companies that produce the bulk of the programming – Walt Disney, Time Warner, Viacom, News Corp., CBS Corp. and Comcast/NBCUniversal – for continually charging more. But whatever the source, the average cable bill is on course to hit some $200 by 2020.

"What they failed to do in the act was to prevent consolidation," says Susan Crawford, a professor at the Benjamin N. Cardozo School of Law and a former Obama Administration official, "and where consolidation is possible, competition is impossible."

When it comes to wired Internet service, the cable companies have virtually cornered the market, she says. And Verizon and AT&T have a near duopoly on wireless telephone and data services.

Crawford and other analysts say the act, alone, is not to blame. They also point to the industry’s legal and regulatory workarounds.

In 2002, for instance, cable companies convinced the Federal Communications Commission that cable Internet is an "information service" rather than a "telecommunications service." That meant cable companies – unlike telephone companies, whose infrastructure is considered a sort of public accommodation – did not have to open up their networks to competitors.

The Supreme Court, in a 2005 decision Markey and consumer advocates have decried, deferred to the FCC’s judgment.

What About That Ad?

Markey’s concern about some of the central elements of the Telecommunications Act makes it difficult to apportion blame for its failures — or credit for its successes.

And the task is further complicated by rapid technological shifts since the passage of the act; the Internet’s explosion has outrun many of the law's assumptions.

But that’s not to say lawmakers were oblivious to a nascent Internet when they crafted the bill in 1996.

Gerry Waldron, a lawyer who worked for Markey on the telecommunications subcommittee in the 1990s, says Congress knew the web was going to be big. But legislators were possessed of a certain humility: they knew they were ill-equipped to regulate it.

The result – a deliberate hands-off approach.

Darrell West, director of the Center for Technology Innovation at the Brookings Institution, says the decision to keep the Internet out of the bill – giving innovators a free hand – did play some role in the Internet’s growth.

And the bill had other, similarly indirect impacts on the web’s explosion.

The investment Markey encouraged in local telephone service was a failure, in many respects. But the would-be telephone companies that tore up the streets of Boston, New York and Philadelphia left behind fiber optic cable that helped fuel the Internet’s early growth.

The cable companies did something similar in their pursuit of telephone business – creating much of the broadband infrastructure used by Facebook, Skype and Google today.

That allowed Markey to claim, in his ad, that the Telecommunications Act of 1996 – the measure at the top of his Congressional resume – unleashed "competition and private sector investment" that led to "good jobs" in the Internet sector.

Of course, the effort was not as purposeful – and the results not as direct – as the average viewer might have imagined.