You think the third series of "Downton Abbey" is the best new British show on public television? Not by a long shot, now that "Doc Martin" is on the case again, starting tomorrow night (Wednesday) at 9 on Channel 44, for its sixth season — or Series Six as they call it. They're also calling this the next-to-last series.

The funny thing is that the good doctor would probably have loved to be living at some place like Downton among the prigs and high-tea celebrants. Or at least in London, working for a top hospital. Instead, he's mired in the 21st century Cornish town of Port Wenn (Port Isaac in real life), with assorted goofballs and goofoffs, who all refuse to call him Doctor Ellingham instead of their term, Doc Martin. And when his aunt, Ruth, comes to town, she also asks to be Dr. Ellingham but instead she's, of course, Dr. Ruth.

It's this interlace between high and low, cerebralism and earthiness, that gives the show its great charm, and it's not always, or even mostly, resolved in favor of the townies. As he dismisses them with his favorite invective, "You idiot," you'll more than likely find yourself sympathizing with him, though the lion's share of sympathy on the program goes to his on again-off again love interest, Louisa, the mother of his unlikely child.

Still in “Breaking Bad” withdrawal? You look for something to fill its spot and nothing gets your juices flowing. “Homeland” doesn’t do it for you quite the way it used to. All those conflicted cops and robbers on “Low Winter Sun” or “Luther” don’t have anything on Walter White. You heard “House of Cards” on Netflix was supposed to be great. You give it a try. Too melodramatic. You rent "Top of the Lake." Are you serious?

What’s a poor viewer to do?

Here’s my advice. Say no to noir. Go 180 degrees the other way. Put your faith in the doctor. The bedside manner’s grotesque, but “Doc Martin” has the answer for what ails you as he comes clopping down the hills of Cornwall for Series Six of the cult classic.

Here’s the rub. It’ll cost you; the new season starts Monday on Acorn TV, a streaming service of the online DVD distributor of many of the finest British, Canadian (“Slings & Arrows”) and American public television series, including the first five seasons of “Doc Martin." Each succeeding episode will be available on Mondays. You can see the first few free with a month-long trial, then pay $5 a month or $50 for a year. Or wait till March and watch it on Channel 44 or on DVD.

It took me a while to make an appointment to see the doctor. It sounded like a combination of “Doctor Who” and an action show about somebody who wears military boots. Then I heard it was a comedy, but I’ve never been a fan of those syndicated British comedies on public television.

“Doc Martin” is something else again, the character, the show — and the genre as there are dramatic moments mixed in with the comedy. Martin Ellingham is a skilled British surgeon who develops a slight career impediment – fear of blood or haemophobia. So off he goes to the fictional town of Portwenn (Port Isaac in real life), a small village along the coast in Cornwall, far from the madding London hospitals.

Here are scenes from the first season: 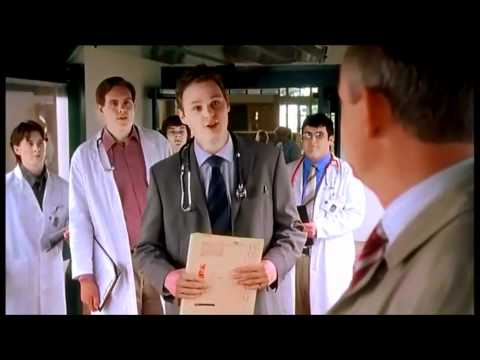 For all his incredible diagnostic skills — and they do sometimes strain credulity — he has another problem besides fear of blood, though he doesn’t see it as a problem. He has zero social skills. Curmudgeonly? Unemotional? Holmesian? Aspergian? Words like that don’t tell the half of it. Brother from another planet, more like.

And in Martin Clunes’s hands, the brother’s hilarious. The tall, broad-framed actor, who apparently is the Doc’s opposite off-camera, has said he takes great pleasure in walking him into the doorframes of the fishing village’s old houses, and making him otherwise pay for his too stiff upper lip.

Cornwall is one of the most remarkable places I’ve been too. The rugged beauty makes the Maine coastline seem like a quiet lake and there’s something almost mystical about the place — and not necessarily in a good way. I kept imagining there were pagan sacrifices going on when the tourists weren’t looking, a la “The Wicker Man.” 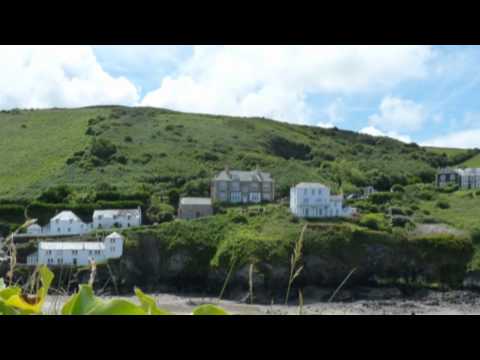 OK, that was probably me. But the villagers did all seem like characters, welcoming certainly, but more than a little odd in their friendliness.

Which is what makes the series so entertaining. They’re characters who instantly gravitate to the new doctor even though he pretty much loathes them. That doesn’t stop him from ministering to them with the greatest of care of from falling slowly but surely in love with the local primary-school teacher, Louisa (played by the delightful Caroline Catz).

“Doc Martin” certainly isn’t the first series to mine the formal urbane intellect vs. the informal earthy unschooled villagers, and the exaggeration can be a bit much, particularly when there’s a visiting yuppie or crude relative in town. You can also sense a formula at work, even though I don’t know that I’d change a bit of it. Doc Martin rubs Louisa the wrong way; villager comes to Martin with a problem that the Doctor instantly diagnoses (or in the early years misdiagnoses and then rights himself); Doc walks through town in suit and tie insulting or sneering at everyone he meets; Doc saves someone’s life; villagers love him, particularly the dogs he’s always shooing away.

Clunes adores dogs when he’s not Doc Martin and although he is so thoroughly the porcine prig when he’s “in uniform” you can sense that he’s having a laugh along with the rest of us as he cuts the kernels off an ear of corn and then eats them with a fork. If you see him in other roles or catch one of the interviews among the few extras in the complete set you know he’s enjoying every minute of it. 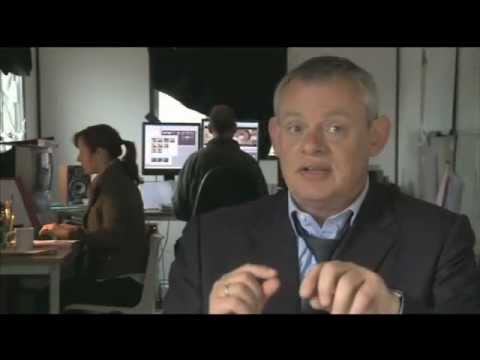 It was a pleasure catching up gradually to the complete Martin oeuvre and with all the noir on television, a little blanc is more than welcome, particularly when it’s as sophisticated and well-executed as “Doc Martin.”

The delights begin with Clunes, not only a master of the invisible wink but an actor who can hint at a softening of the heart with the slightest movement of his eyes or mouth.

Not that we want him to go much softer on the villagers, whom he treats as if they’re telemarketers imposing on his time. He appeals to the snob in everyone — well, me, anyway — with his two-word dismissals of their attempts to get more out of him — “Go away”; “Stop talking”; “Not you”; and my personal favorite, “You idiot.”

The last is often reserved for a self-medicator, someone who’s injected Botox into her eyelid, or the hapless policeman in the last few seasons, Joe Penhale (John Marquez), who preaches zero tolerance and everyone else complies — with zero tolerance for him.

The other villagers don’t listen much more closely to Martin who insists on being called Doctor Ellingham, but of course everyone calls him Doc Martin. (Ellingham is an anagram of producer Dominic Minghella’s last name.) And except for Louisa and one or two others, they aren’t what you’d call lovable — nosy, dim, unhygienic. But they give as good as they get, particularly Ian McNeice as Bert Large, the portly plumber turned restaurateur. The cinematography captures the beauty (if not the mystery) of Cornwall, though the focus is squarely on the human interactions. 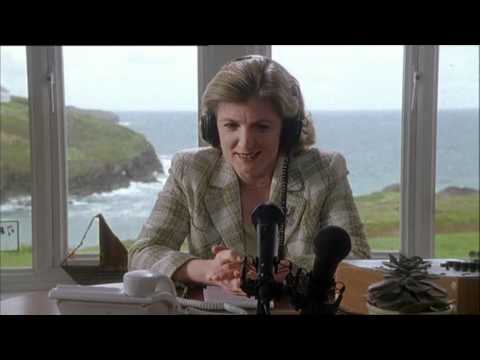 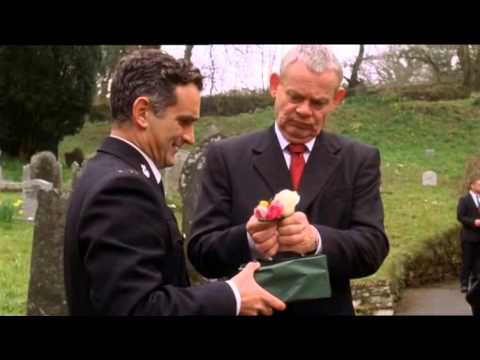 As for the rest of you, ta-da:

This time the wedding goes off as planned in the opening episode, though the honeymoon is a bit extreme even by Doc Martin standards. I’ve seen the first four episodes of Series Six and unlike most shows, this one hasn’t gotten at all stale this long into the run. In fact, I think there have been more laugh-out-loud moments in Series Five and Six as in any previous years, including Martin reading aloud from a medical journal to his infant son, hanging on his every word. And the finale of Season Five — Martin pretending to profess his love to the pharmacist obsessed with him but actually admitting his love to Louisa standing in the shadows — would bring tears to the eyes of a Doc Martin clone.

Stephanie Cole left as Auntie Joan after four years, saying she had stayed on the chicken and vegetable farm she tended long enough. She was almost as sharp a foil for Martin as Louisa, but her replacement, Eileen Atkins as Auntie Ruth, is even better. A psychiatrist, she’s as bright and as unemotional as Martin but with more social skills, bringing a touch of class to Portwenn.

And in something of a reprise of Series One she goes on ditzy Radio Portwenn where she also wants to be referred to as Dr. Ellingham but becomes, of course, Dr. Ruth. Atkins can roll her eyes with the best of them and the rest of her body language ain’t so bad either.

It’s still all one happy family. The Doc, Louiser (as she’s known in the village), Aunt Ruth, the baby, the dog, the villagers. And us. It’s a pleasure to keep company with these Cornish folk, even vicariously.

This program aired on October 7, 2013. The audio for this program is not available.