BOSTON — Doesn’t take much time to make up your mind about “Make Up Your Mind,” the world premiere of an unpublished Kurt Vonnegut play at SpeakEasy Stage Company.

What were they thinking?

About the only reason I can see for producing “Make Up Your Mind” (at the Boston Center for the Arts, through Nov. 30) aside from the late novelist’s name, is that perhaps it plays better on the page than the stage. Nicky Silver, a renowned playwright himself, assembled the script from several Vonnegut drafts of a play concerning a guy who comes up with a “thereapeutic” way of helping patients deal with indecisiveness.

Barlow Adamson plays Roland Stackhouse, a former telephone repairman turned therapist whose philosophy seems to boil down to bullying indecisive people to make up their minds or face beatings from his hit man. Tracy Goss is a classic un-decider and she’s so smitten with his tactics that she becomes smitten with him, and he with her even though there’s not an ounce of chemistry onstage between them. Ross Bickell is Roland's father, an equally unqualified marriage counselor down the hall who seems to despise his son and vice versa. Richard Snee plays a stupidly made up Vonnegut, casting wry but inane observations on man’s fate.

I’ve never seen the three talented male actors founder as badly as they do here. Goss, a life counselor as well as an actor, is making her SpeakEasy debut and I can’t imagine this miscast performance will be making her highlights reel either. The mood is cartoonish, beginning with Eric Levenson’s set dominated by basic, humorous line drawings that he based on Vonnegut's style. Vonnegut’s prose style, itself, is rather cartoonish, even when dealing with serious subjects, but at its best there’s a “Catch 22” aspect to his surrealism.

“Make Up Your Mind,” a mercifully short 90 minutes, would seem to bolster Edward Albee’s assertion that the only artists who could master more than one genre of writing were Shakespeare and Chekhov. The nonsensicality of Vonnegut’s world simply doesn’t transfer to the stage. (“Happy Birthday, Wanda June” may have been more successful, though I can’t say that I have a huge urge to fill that gap in my knowledge.)

Speaking of Albee, he was obviously no stranger to absurdism, but his language is theatrical to its core. Vonnegut’s belongs to the world of the novel where the mind fills in all kinds of surreal set designs and human interrelations, no matter how non-representational. Cliff Fannin Baker’s direction and the actors’ stiff deliveries reduce Vonnegut’s characters to less than zero. Calling them cartoons would be a compliment.

Here, make up your mind: 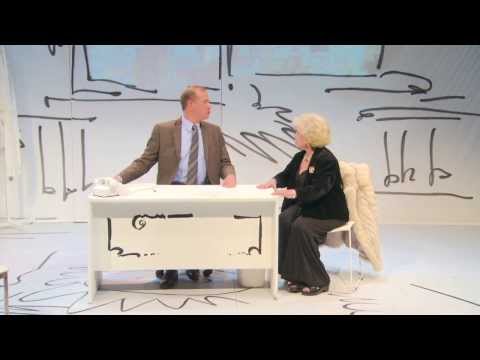 And yet Snee in his other role — as Otis Fletcher, a patient — does manage to bring a sense of fun to the proceedings. His open-mouth befuddlement and masochistic enjoyment of the therapy (akin to Jack Nicholson’s in “Little Shop of Horrors”) give you a sense of what the production was aiming for — a world neither completely realistic nor surrealistic, in which the absurd casts a silly but enlightened glow on our lives.

Every scene that he’s not in doesn’t reach the necessary level of zaniness. "Make Up Your Mind" never welcomes us to the monkey house.

This program aired on November 5, 2013. The audio for this program is not available.