BOSTON — What is it in the end that still draws us? John F. Kennedy seems more like a dream drifting across the ages than a figure of history.

"Let the word go forth from this time and place, to friend and foe alike, that the torch has been passed to a new generation of Americans," Kennedy said in his inaugural address.

The most famous lines from that speech are inscribed on the president's graveside memorial. We recite his speeches. He's a young man who never grows old. Surely that's part of what draws us.

"The story itself, of the young prince being gunned down, that story is irresistible," said writer and biographer Richard Reeves.

"What keeps the legend going is he was the first president whose entire life was photographed and filmed and televised,"Reeves said.

"He had this charismatic personality that, together with this terrifically photogenic face — that huge, broad smile that just electrified people. He looked always so natural," said historian Nigel Hamilton, one of many biographers who sought to capture the elusive Kennedy.

“He carried himself with a cool grace, which seemed indifferent to applause,” wrote Norman Mailer. Kennedy was detached. A war hero. Rolling in family money. He was a matinée idol. A prince. And his wife was ravishing.

"We've all seen them, all those marvelous pictures of him and Jackie have made him the glamour boy of American history," said Richard Goodwin, one of Kennedy's White House staffers.

"There was a freshness to him, that's the best way that I can describe it," said former Gov. Michael Dukakis. "Both physically and in terms of what he was saying that was very new, very different, and for many of us, enormously inspiring."

Young Mike had just taken the bar exam when he and a friend drove a sports car, a Karmann Ghia, from Boston out to Los Angeles to attend the 1960 Democratic National Convention.

The country they crossed midway through the century was mired in the Cold War and a color line, the search for communists and conformity and the dread of nuclear annihilation.

"With all due respect to Tom Brokaw, spare me this 'Greatest Generation' stuff," Dukakis said. "This country was racist, it was anti-Semitic. The divide between rich and poor — which is bad enough as it is today — was huge."

But standing before that convention was a candidate who claimed, "we can do better," and told Americans, "only you can decide what you want to do with the future."

"And we stand today on the edge of a new frontier: the frontier of the 1960s," said Kennedy.

In accepting the party's nomination, Kennedy invoked the pioneer's spirit. It was a generational frontier, where the youngest man to be elected president tapped into the well of energy and hope buttoned-down by the '50s and by the elderly Dwight Eisenhower, then the oldest president in history.

Onto the field he went with soaring rhetoric and athleticism. He was gifted with his opponent, Richard Nixon, a gloomy, heavy-browed dark knight who, even when he won debates, was outshone by the white knight. Liberals wistfully remember this as one of the great boon moments of American liberalism. The campaign song swung with optimism, and no one less than Frank Sinatra sang it.

"There was an atmosphere of hopefulness. I think people today can understand that atmosphere if they think about the way they felt in 2008 about Barack Obama," said Robert Ross, Clark University professor and co-founder of SDS, Students for a Democratic Society.

"Something different was going to happen and that was going to be better," explained Ross. "There was a moment of peak hopefulness."

Ross remembers a late night crowd of thousands at the University of Michigan before the election, as Kennedy challenged them to public service.

Inspired by Kennedy, some students coined the phrase "Peace Corps."

"Thousands of Michigan students signed that petition, asking the president to create a Peace Corps," said Ross. Kennedy accepted it and created the group by executive order in his early days of office.

For Ross, that was the high point of a president who would vex and disappoint him and fellow progressives. Yet, Ross said, people make the history they need. And so they transfer to the dead president their own hopes for what never came to pass.

"What we would have hoped for is what we see as our memory of John Kennedy," said Ross.

"His inaugural address was a call to war. There were only three words in there on domestic affairs," said Reeves.

At the urging of an adviser, Kennedy added those words in a passage about America's commitment to human rights "at home and around the world."

"The only great cause at that time aside from Cold War stuff was economic growth. He did turn finally to civil rights," said Goodwin.

But it wasn't until June 1963, and after waves of violence, that Kennedy publicly came down on the side of justice over order, and called for integration.

"He didn't go as far as some people wanted at that time, but he was moving in that direction," said Goodwin.

A number of Kennedy's actions challenged his image as liberalism's standard-bearer. He raised Pentagon spending to 50 percent of the federal budget, cut taxes on the rich and on capital gains, gave the green light to CIA plots to kill Fidel Castro, and sent 16,000 military advisers to Vietnam. Yet, Reeves calls him a relatively effective president.

"We were farther away from World War III at the end of his presidency than at the beginning, and that's an accomplishment," said Reeves.

Kennedy was skeptical of the generals, he brought us out of the Cuban missile crisis, and he negotiated a ban on atmospheric nuclear testing.

A week after Kennedy was assassinated, Jackie told historian Theodore White that, at night, she often played a record from the Broadway musical "Camelot" for her husband. It was his favorite.

For his family, his loyalists and the party faithful, Camelot became the label and the prevailing image for Kennedy's brief presidency and the means for shaping the writing of history.

"It's an emotional nostalgia," said Hamilton. "It's a notion that there was a time, a sort of fairy tale past, where everything was wonderful."

"It wasn't so much what he did but the spirit of triumph that he had," said Goodwin. "He made us feel that we were better than we thought we were."

In the end, what we know is that he was young and gifted, he spoke of ideals, a future we could choose, and of hope, which still draws us close.

Note: Visit the JFK Library's website at 1:30 p.m. to watch the live stream of a special tribute to President John F. Kennedy. 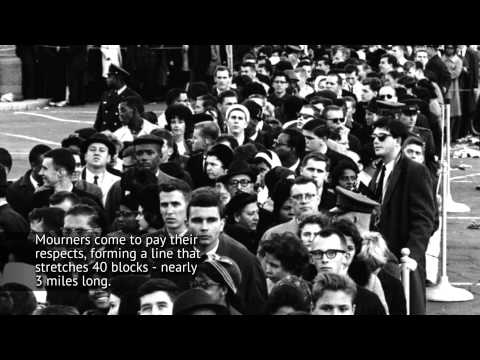 This article was originally published on November 22, 2013.