Nobel Peace Prize winner Elie Wiesel witnessed the unimaginable when he was only 15. And what he saw has defined his life ever since.

Wiesel was born in 1928 in Sighet, Transylvania (now Romania). His father was a community leader and a Zionist. His mother espoused the religious beliefs of her father, a Hasidic farmer. The young Wiesel studied Judaic texts, sang, played violin and dreamed of conducting an orchestra. Then in 1944, Hitler’s Final Solution reached his remote town. Wiesel’s family and neighbors were herded into cattle cars destined for concentration camps. Wiesel never saw his mother and one of his sisters again.

“In those places, in one night one becomes old,” Wiesel said during a recent interview in New York. “What one saw in one night, generations of men and women had not seen in their own entire lives.”

One night, Wiesel’s father, ill with dysentery, was swept away to the crematorium while his son slept in the bunk above. When he was liberated from the Buchenwald camp in 1945, Wiesel made a vow of silence not to speak or write about his experiences for 10 years.

“I wanted to be sure to find the words, the right words," Wiesel said. "I'm not sure I did. I have doubts. To this day I have doubts, because there are no words.”

After World War II, disgusted, heartbroken and alone, a teenage Wiesel went to Paris. He studied at the Sorbonne and found work writing for Israeli and French newspapers. Then Francois Mauriac, a prominent French writer, convinced Wiesel to finally put pen to paper. The young survivor called his tale “And the World Remained Silent.”

“I was saying, 'Look, it happened, and the world knew,' " Wiesel explained.

But he couldn’t find a publisher. “They said it's too sad and too morbid,” Wiesel recalled about the rejection letters.

Eventually, Hill & Wang agreed to publish the dark memoir, but Wiesel was told to rename it. “La Nuit,” or “Night,” hit bookshelves in 1960.

Wiesel said it took five years to sell 3,000 copies. But eventually “Night” became a bestseller, and it’s still taught in classrooms around the world.

Professor Michael Dobkowski has been introducing undergrads to Wiesel’s slim, 116-page memoir for 35 years. He teaches classes on the Holocaust at Hobart and William Smith Colleges in Geneva, N.Y.

“It drags you into this anti-world, into this upside down universe that we understand the Holocaust to be now," Dobkowski said. "And it does so by stories, which I think is one of his great gifts.”

Dobkowski witnesses the book’s sobering effect on his students year after year. And the professor says it changed the course of his own life when he first read it as a student (and self-described Wiesel "groupie") in the 1960s. Dobkowski calls it “the first Holocaust narrative” and says it put the atrocity onto America’s cultural radar.

As a professor of 38 years at Boston University, Wiesel also touched thousands, including Martha Hauptman. She was his personal assistant for 27 years.

Hauptman started working with Wiesel after taking the first class he taught at BU in 1976. She described Wiesel as an accessible, moral model and vividly remembers the wisdom he passed on to his students — including, “The opposite of love is not hate, it is indifference."

Wiesel has delivered countless lectures about the tempting but dehumanizing power of apathy. 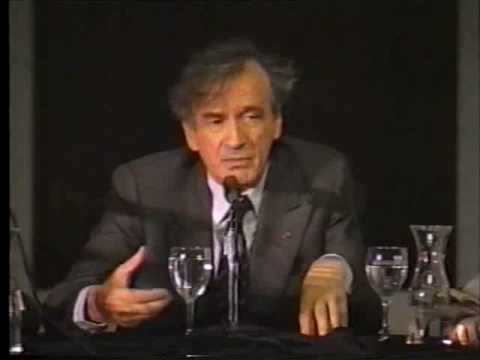 “I came to a conclusion that the peril threatening human kind today is indifference, even more than hatred. There are more people who are indifferent than there are people who hate. Hate is an action. Hate takes time. Hate takes energy. And even it demands sacrifices. Indifference is nothing, but indifference to hatred is encouraging hatred, and is justifying hatred. So what we must do — I mean your peers and mine – is fight indifference.”

Wiesel also told his students that he didn't want his past to become their future, Hauptman recalled, adding, “This is how I see the visionary in him, because that’s what he really believed. And he would say, ‘Do something, anything, start somewhere, anywhere.' ” And Hauptman said they did.

Professor Michael Zank, director of the Elie Wiesel Center for Judaic Studies at Boston University, is gathering reflections from former students and academic peers who’ve been deeply influenced by Wiesel. Zank counts himself among them. When he first read “Night” back in Germany, where he was born, he remembers being touched by its tone. Wiesel asks questions, Zank suggested, for which we know there are no answers.

“Instead of drawing your attention, for example, to images of horror, [Wiesel] tries — like Primo Levi — to conjure the human being confronted with horror and restores the humanity to that human being,” Zank elaborated. “He wants us to look beyond the dehumanization that is associated with genocide and see the person.”

A 'Messenger To Mankind'

But Wiesel’s sphere of influence expanded greatly after he won the Nobel Peace Prize in 1986. The committee called him a “messenger to mankind.”

In humbly recalling the moment, Wiesel said, "That day the world listens. That day. The next day they forget — but that day they listen."

And they continued to pay attention to Wiesel. When an international crisis erupted, media calls would flood the professor’s office, seeking his response. He used the Nobel Prize money to create the Elie Wiesel Foundation for Humanity with his wife of more than 40 years, Marion. Wiesel has spoken out against torture, persecution and genocide in places such as Cambodia, Argentina, Rwanda and South Africa. Even so, Wiesel questions how much influence he’s actually had.

“Not enough really. I'm not playing with false modesty, but the decision makers, I'm not sure I affected them,” he mused.

Which isn’t to say he hasn’t tried. He’s had a knack for using public events to make face-to-face requests of decision makers — like the 1985 White House ceremony where he unsuccessfully lobbied President Ronald Reagan to cancel his trip to a cemetery in Bitburg, Germany, because Nazi SS soldiers were buried there. And at the dedication of the United States Holocaust Memorial Museum in 1993, where he implored President Bill Clinton to stop the bloodshed in the former Yugoslavia.

Wiesel actually played a major role in creating that now-iconic D.C. museum. President Jimmy Carter recalls asking Wiesel to chair the Commission on the Holocaust and the Memorial Council charged with overseeing its design.

“I knew that he had a terrible personal experience in the Holocaust itself,” Carter said in a phone interview. “And I didn’t know if he wanted to take on this emotional responsibility.”

Wiesel said yes, but was determined to create not just a memorial, but something more ambitious: a center of learning and research dedicated to preventing further atrocities.

“A memorial unresponsive to the future would violate the memory of the past,” Wiesel said. Today, 2 million people visit the Holocaust Museum each year.

President Carter also asked Wiesel to advise him in the creation of The Carter Center for human rights.

“I’ve learned to appreciate his objectivity," President Carter said. "An objectivity heavily oriented with idealism. I think he has always exemplified — at least in my experiences with him — a commitment to peace and to justice and to basic human rights.”

The two elder statesmen haven’t always seen eye to eye, especially regarding the tensions in the Middle East. Others have taken issue with Wiesel’s stance on Israel, his spiritual home.

“I think there is an unwillingness on Professor Wiesel’s part to speak about the Israeli-Palestinian conflict,” said Joshua Rubenstein, who directed Amnesty International’s northeast office for 37 years.

“[Wiesel] expresses his sadness over the suffering of course, and the conflict and the violence, but when he’s been approached to speak about Palestinian suffering he has deferred," Rubenstein said. "He’s said he really would only want to be critical of Israel in Israel. This has disappointed many intellectuals and activists in Israel itself who have a great deal of respect for Wiesel but expect more of him.”

Rubenstein points to the controversial full-page ad Wiesel published in 2010 in The New York Times. In it he wrote, among other sentiments, that Jerusalem belonged to the Jewish people.

“I don't speak or write to please or not,” Wiesel said when asked about reactions to that and other times when he’s courted heated disagreement. “I speak or I write about things that matter to me and that are therefore essential to me. If they pleased some people, and displeased others, too bad, or too good.”

Speaking to BU Professor Michael Grodin revealed a different side of Wiesel.

“I think most people associate him with the Holocaust, which I think is understandable but unfortunate,” Grodin said. "It doesn't capture who he is as a person.”

Grodin, a practicing psychiatrist, has known Wiesel for years. (Wiesel wrote the introduction for Grodin's 1992 book, "The Nazi Doctors and the Nuremberg Code," which he said put him on his academic path.) Grodin teaches classes on bioethics in the context of the Holocaust and works with victims of trauma around the world, including the dwindling population of Holocaust survivors. Grodin said Wiesel always responds to letters and phone calls from others who suffered through brutal treatment in the concentration camps.

“He's a pretty serious guy, but, you know, he has these moments where he opens up and he's transported back to Romania and the old country," Grodin said. "When you start to sing songs, particularly in Yiddish, you can start to see he lights up. And he takes himself back to that place. He's a child again, an adolescent.” 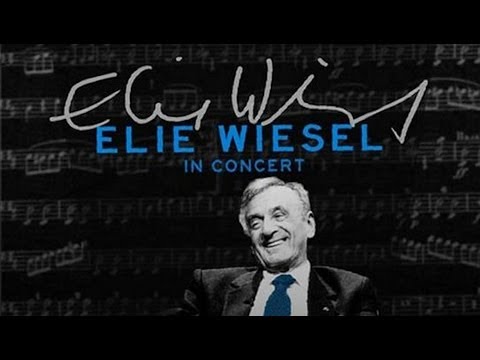 'Haven't We Learned Anything?'

Sitting in his foundation’s office on New York’s Madison Avenue, the spry 85-year-old Wiesel considered the world today, and his penetrating eyes darkened a bit. In the wake of our contemporary wave of tragedies, including 9/11, he laments that his central humanist messages have not been heard.

“Otherwise why should there be such an obsession with violence these days?” he asked. “Don't we know? Haven’t we learned anything? That is my question and my despair.”

At the same time, Wiesel holds onto hope and still maintains an unfailing faith in humanity’s potential. He told me his students are his life. When asked if he wishes he’d done anything differently, Wiesel said of course he did.

"It wouldn't be normal not to regret or have remorse," he said. "Meaning, have I really written or said the right way about certain things? Did I use the right words?

“At night they come to haunt me — the words I have not used,” the poetic and prolific writer admitted.

But the words Wiesel has used will carry on — and there are a lot of them. He’s written more than 60 books, and says he is always working on the next one.

Correction: An earlier version of this report misspelled Primo Levi's last name. We regret the error.