This piece of classical music — it's "Lascia Ch'io Pianga" from Handel's opera "Rinaldo" being performed in Amsterdam — has an unusual twist:

That's a soprano you hear singing. But the name of this soprano may surprise you. He is Robert Crowe, a male soprano. It's the world's smallest vocal category, with very few male sopranos singing professionally worldwide.

Crowe is working on a doctoral degree at Boston University and will spend this summer performing and researching in Europe, and he spoke with WBUR's All Things Considered host Sacha Pfeiffer before he heads overseas. Listen to our full interview and read interview highlights below:

On the definition of a male soprano:

It's the highest voice category of the adult male that occurs naturally, let's say. It's where the man, for whatever reason, has kept part of the voice of the boy. And to be considered a male soprano, you have to be able to, as a man, sing more or less the same range as a female soprano. So it's quite high.

On the history of castrato, a type of classical male singing voice equivalent to a soprano:

Castrato, of course, is Italian for a castrated male. Boys [primarily in Italy] were castrated between the ages of 6 and 8 if they had promising voices. Then they hoped that the voice would mature into a castrato soprano, and then the very lucky few would have enormous careers and earned amazing amounts of money. But most of them actually didn't end up with good voices, so it was a pretty risky gamble. But the Church — because, of course, they didn't allow women to sing in the church — tolerated this. [But this practice hasn't been allowed for several hundred years.]

On whether his unique voice makes it difficult for him to find singing parts, or makes him in-demand:

On his initial reaction, early in his career, to realizing he was a soprano:

There was probably a year or so that I was shocked, on some level, to hear the voice coming out of me... I mean, I knew I could do it, but it didn't sound like me for a while. So I understand this weird dislocation feel [that some people have while watching me sing].

I wanted to be a romantic tenor for a long time and I was a terrible tenor for quite some time [because it was] not my natural voice and I cracked all over the place. I sort of reluctantly accepted that I was a countertenor, and then a couple years later when everyone told me that I was simply too high for a countertenor and I needed to sing lower, I just decided not to sing lower, and as I was singing soprano parts I decided to call myself a male soprano. I guess I knew there were a couple male sopranos in the world. I just decided to take a leap of faith and call myself what I was actually singing.

Male sopranos are sometimes referred to as countertenors, but Crowe makes a distinction because he sings higher than a countertenor. To compare the two, watch him singing with professional countertenor Brian Asawa: 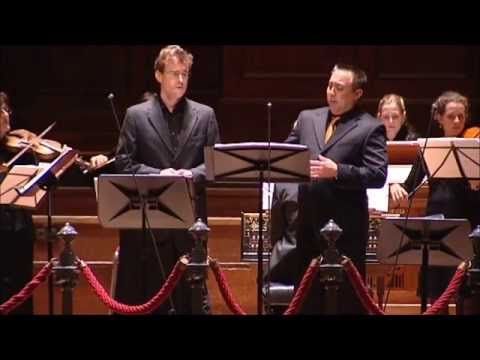 You hear we're singing in very close range, but it's a very different sound. My voice, because it sits much higher than Brian's, it must be a bit lighter and more of a slender sound. Brian has a dark, rich sound and quite a bit lower voice.

To hear Crowe singing in a range of more than two octaves, listen here.