A 1993 study of college students showed them performing better on spatial reasoning tests after listening to a Mozart sonata. That led to claims that listening to Mozart temporarily increases IQs — and to a raft of products purporting to provide all sorts of benefits to the brain.

In 1998, Zell Miller, then the governor of Georgia, even proposed providing every newborn in his state with a CD of classical music.

But subsequent research has cast doubt on the claims.

Ani Patel, an associate professor of psychology at Tufts University and the author of "Music, Language, and the Brain," says that while listening to music can be relaxing and contemplative, the idea that simply plugging in your iPod is going to make you more intelligent doesn’t quite hold up to scientific scrutiny.

“On the other hand,” Patel says, "there's now a growing body of work that suggests that actually learning to play a musical instrument does have impacts on other abilities.” These include speech perception, the ability to understand emotions in the voice and the ability to handle multiple tasks simultaneously.

Patel says this is a relatively new field of scientific study.

“The whole field of music neuroscience really began to take off around 2000,” he says. “These studies where we take people, often children, and give them training in music and then measure how their cognition changes and how their brain changes both in terms of its processing [and] its structure, are very few and still just emerging.”

Patel says that music neuroscience, which draws on cognitive science, music education and neuroscience, can help answer basic questions about the workings of the human brain.

“How do we process sequences with complex hierarchical structure and make sense of them?” he asks. “How do we integrate sensation and action? How do we remember long and difficult sequences of information? These are fundamental neuroscience questions, and music can help us answer some of these questions, because it's in some ways simpler than language, but it's still of sufficient complexity that it can address these very deep and important aspects of human brain function.”

In addition, Patel says music neuroscience research has important implications about the role of music in the lives of young children.

“If we know how and why music changes the brain in ways that affect other cognitive abilities,” he says, “this could have a real impact on the value we put on it as an activity in the schools, not to mention all the impact it has on emotional development, emotional maturity, social skills, stick-to-itiveness, things we typically don't measure in school but which are hugely important in a child's ultimate success.”

El Sistema At One Boston School

At the Conservatory Lab Charter School in Boston, every student receives music instruction.

“It doesn’t matter whether they have had music instruction before or not," says Diana Lam, the head of the school.

The school, which accepts new students by lottery, is bucking a national trend, as more and more cash-strapped school districts pare down or eliminate music programs.

Lam says music is part of her school’s core curriculum because it teaches students to strive for quality in all areas of their lives — and because it gets results.

"Music addresses some of the behaviors and skills that are necessary for academic success," she says. "Since we started implementing El Sistema, the Venezuelan music program, as well as project-based learning, our test scores have increased dramatically."

But what does the latest scientific research tell us? The question, according to neuropsychologist Nadine Gaab, is not simply whether music instruction has beneficial effects on young brains.

"There's a lot of evidence,” Gaab says, “that if you play a musical instrument, especially if you start early in life, that you have better reading skills, better math skills, et cetera. The question is, what is the underlying mechanism?”

At her lab at Boston Children's Hospital, Gaab leads a team of researchers studying children's brain development, recently identifying signs in the brain that might indicate dyslexia before kids learn to read, as we discussed in an earlier report from this series. Gaab and her colleagues are also looking for connections between musical training and language development.

"Initially we thought that it's training the auditory system, which then helps you with language, reading and other academic skills," she says.

Instead, in a study published last month, Gaab and her team delineated a connection — in both children and adults — between learning to play an instrument and improved executive functioning, like problem-solving, switching between tasks and focus.

"Could it be,” Gaab asks, “that musical training trains these executive functioning skills, which then helps with academic skills?"

To find out, researchers gave complex executive functioning tasks to both musically trained and untrained children while scanning their brains in MRI machines.

While noting the children's ability to follow the rules, the scientists also watched for activity in the prefrontal cortex of the brain, known to be the seat of executive functioning.

"We were just looking at how much of the prefrontal cortex was activated while they were doing this 'neigh-froggy' task in the scanner,” Gaab says. “And we could show that musically trained children and professional adult musicians have better executive functioning skills compared to their peers who do not play a musical instrument. We could further show that children who are musically trained have more activation in these prefrontal areas compared to their peers.”

So does music-making enhance executive functioning?

Gaab hastens to add, “We don't know what's the egg and what's the hen.” That is, whether musical proficiency makes for better executive functioning, or vice-versa.

But Gaab cites other studies which imply the former.

And Gaab says that's analogous to what happens in the brain of a musician.

"There are a lot of different brain systems involved in successfully playing even a small musical piece: your auditory system, your motor system, your emotional system, your executive function system; this playing together of these brain regions, almost like in a musical ensemble."

But the question remains: Why would acquiring musical skills influence language and other higher brain functions? Neuropsychologist Patel has developed a theory he calls the OPERA hypothesis.

"The basic idea is that music is not an island in the brain cut off from other things, that there's overlap, that's the 'O' of OPERA, between the networks that process music and the networks that are involved in other day-to-day cognitive functions such as language, memory, attention and so forth,” he says. “The ‘P’ in OPERA is precision. Think about how sensitive we are to the tuning of an instrument, whether the pitch is in key or not, and it can be painful if it's just slightly out of tune."

"And the last three components of OPERA, the ‘E-R-A,’ are emotion, repetition and attention,” he says. “These are factors that are known to promote what's called brain plasticity, the changing of the brain's structure as a function of experience.”

Patel explains that brain plasticity results from experiences which engage the brain through emotion, are repetitive, and which require full attention. Experiences such as playing music.

"So this idea,” he says, “that music sometimes places higher demands on the brain, on some of the same shared networks that we use for other abilities, allows the music to actually enhance those networks, and those abilities benefit."

One striking example of this is the use of singing to restore speech. At the Music and Neuroimaging Lab at Beth Israel Deaconess Medical Center, Dr. Gottfried Schlaug has pioneered singing as a therapeutic method of rehabilitating victims of stroke and other brain injuries, as well as people with severe autism.

And some of the most recent music neuroscience research is using music as a tool to better understand, and even predict, language-based learning disabilities.

But not all of the ideas behind this research, or even the methods, have come from scientists.

Paulo Andrade teaches music at Colegio Criativa, a private school in Marilia, Brazil. He and his wife Olga, who's also a teacher there, became interested in the relationship between musical and language skills among their elementary school students.

"We both work with the same children,” Andrade says, “and we started to exchange information about how the children were going. I could relate the musical development of children to their language ability and literacy.”

Andrade developed some collective classroom tasks to identify children at risk of learning disabilities. He asked his second-grade music class to listen to him play a series of chord sequences on the guitar, and identify each one.

"I asked [the] children to write visual symbols to represent the sound sequence they were hearing,” he explains, “a simple line to express chords in the high register and a circle to represent the chords played in the low register.”

Andrade made the students pause before writing down the identifying symbol. This would test their working memory, a kind of mental Post-it note crucial to language comprehension.

"What I presented to children was simple rhythm, for instance, [Andrade imitates the sound of his guitar] ti-tum-tum-chi. I counted the meter one, two, three, four, and then they start to write." 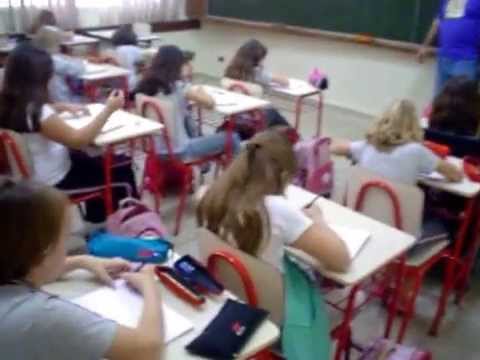 What Andrade saw was that the kids who had severe difficulty with the task were also struggling with reading and writing. He knew he had good data, but he needed help from a scientist to analyze his data and methodology, and to write up the findings for publication.

“I read some papers by Nadine Gaab, and I searched for the page on the Internet and found Harvard and emailed her," he says.

Recently, Andrade was in Boston on a Harvard fellowship, working on a follow-up to his research at the Gaab lab.

"We have found that this task, given to second-graders, can predict their literacy ability in the fifth grade," Andrade says.

About her collaboration with the Brazilian music teacher, Gaab says, "I think that's a really nice example of neuroeducation, bridging neuroscience and education."

And she adds that Andrade’s musical test is particularly useful, in that it can be administered cheaply and easily to whole classrooms, regardless of the students' native language.

"What we would love to do is replicate this study in the U.S.,” Gaab says, “but there's no funding right now, so we're working on that.”

Patel, the Tufts professor, says that getting funding for research in music neuroscience is often a challenge. It’s still a young field, he says, “and funding bodies tend to be very conservative, in terms of the kind of research they fund."

The difficulty in sustaining funding may be similar to what music educators are facing.

"In terms of music in the schools,” Patel says, “it's interesting that music is often the very first thing to be cut when budgets get tight, and as far as I know, that's never based on any research or evidence about the impact of music on young children's lives; it's based on the intuition that this is sort of a frill."

"Currently there's a lot of talking about cutting music out of the curriculum of public and private schools, and I think it may be the wrong way to go,” Gaab says. “It may cut out some of the important aspects, such as to train executive functioning and have fun and emotional engagement at the same time.”

Both Gaab and Patel believe that music neuroscience is paying off, not only in showing the tremendous practical importance of music education, but also to help answer fundamental questions about the deepest workings of the human brain.

George Hicks Senior Producer/Technical Director, Special ProjectsGeorge Hicks is the former technical director/producer for special projects and Open Source with Christopher Lydon. He has recorded jazz greats Stan Getz, Keith Jarrett and Roscoe Mitchell among others, and plays and composes jazz in his spare time.