Company One productions always feel more like rock ‘n’ roll shows than any other theater’s, even Oberon’s. It’s not only the relative youth of the audience, but the expectations in the air that what’s about to unfurl is going to be high-energy, in-your-face entertainment of a special order. That they’ve been able to combine that sensibility with a welcoming attitude toward anyone interested in good, exciting theater is part of the company’s seductive alchemy.

The current production, “Shockheaded Peter,” not only feels like rock ‘n’ roll; it is rock ‘n’ roll. Walter Sickert and the Army of Broken Toys’ steamCrunk, to be specific, but close enough. Sickert looks, plays, acts and writes like Dr. John on steroids while his mischievous melodies suggest the Kinks going to darker places than Ray Davies inhabits. Or, as he told ARTery contributor Susanna Jackson, it’s music that he hopes evokes a mood of “Charlie and The Chocolate Factory” meets “Hellraiser.” 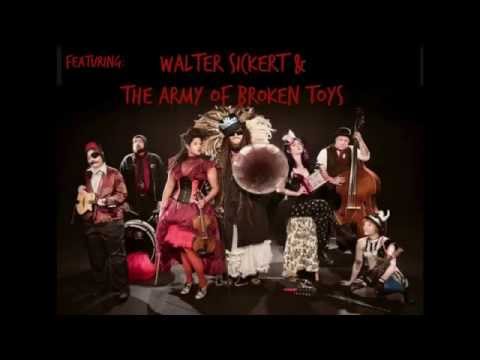 (Sickert “reimagined” the original score by the Tiger Lillies, who are more “Mack the Knife” meets Johnny Rotten.)

On the face of it, “Shockheaded Peter” (through April 4 at the Modern Theatre, not at the Boston Center for the Arts) goes to incredibly dark places. The fairy tales of Heinrich Hoffmann has an overarching Victorian moral to them — that bad things happen to children who don’t behave. And in this adaptation by Michael Morris and a slew of Brits in 1997, really, really bad things happen to them. Harriet sets herself on fire, Fidgety Phil bleeds out after stabbing himself with the silverware, Augustus starves himself to death. 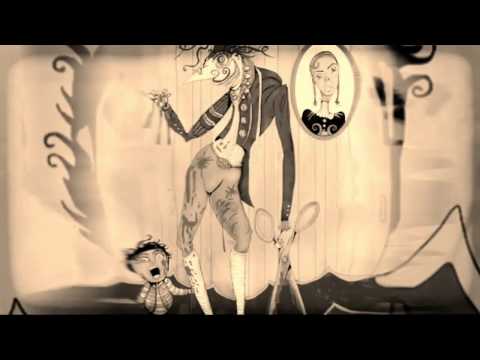 Oh, and it’s a comedy. One youngster’s parents cut his thumbs off because he won’t stop sucking them as Sickert gleefully leads the audience in the singalong, “Snip Snip.” All of which might lead you to pronounce his name with added emphasis on the first syllable of his last name. Particularly since he’s a brand-new father himself.

But Sickert and the mother of the child, Edrie, aren’t about to bury their newborn under the floorboards, as the parents of the Shockheaded one do early in the 90-minute show. Edrie, who helped engineer the collaboration between Army of Toys and Company One, bowed out of the show, instead.

Peter’s parents might have been able to live with that shock of red hair, but those Edward Scissorshands fingers? Won’t do, won’t do. The parents of all these lads and lasses want their kids to behave, to take their place in middle-class society — and to not threaten the older generation’s place there as well.

The actors and musicians — and puppets — under Steven Bogart’s hyper-imaginative direction are in perfect sync with the material. On the face of it they are having a ball with the twisted fairy tales — yukking it up at the children’s expense. But the moral of the Company One production comes at the parents’ expense — for stifling their children’s creativity with repressive rules.

That explanation, voiced by Bogart in the program notes, can be a little questionable or reductionist at points in the production. Telling your children not to play with matches doesn’t make you a fascist parent.

But let’s not be overly literal. In general, “Shockheaded Peter” gets you to all kinds of fascinating territory. It’s a release of dark impulses — as Sickert says, like watching that horror movie your parents didn’t want you to see. The violence is on a par with the great Looney Tunes transgressions, though the children don’t come bouncing back to life like Sylvester or Wile E. Coyote. (As long as we’re pairing things, “Shockheaded Peter” is Bugs Bunny meets Martin McDonagh’s “The Pillowman.”)

However you look at it, though, “Shockheaded Peter” is a celebration of great theater. While Sickert is leading the musicians, Alexandria King is the MC, recalling her counterparts in “Cabaret” and “Pippin.” King, though, isn’t looking for the wry charisma that most actors try to bring to those roles — Bogart directed Amanda Palmer in the A.R.T.’s notso hotso “Cabaret.”

With a hairdo that could be dubbed a Frankenfro and a downturned mien that comically warns that you might be locked in the closet for not heeding her warnings, she’s a fine counterpart to Sickert’s dreadlocked black humor. The rest of the cast is a joy to watch as they bite the dust with panache. The body language of Brooks Reeve as the father and Amelia Lumpkin in a variety of roles is particularly engaging.

The masks and puppetry would make Julie Taymor proud — the ill-fated voyage of Flying Robert is beautifully pulled off. So however you look at it, “Shockheaded Peter” is an ode to creativity — the creativity of children that gets stifled as well as the creativity of theater artists unafraid of going to new places and taking grateful audiences along for the ride.