Part of an occasional series, "Suicide: A Crisis In The Shadows"

WALTHAM, Mass. — TJ Washburn first learned his father, Ted Washburn, was battling depression in 2009. That's when the then-52-year-old starved himself for three days.

"He said basically that he was planning on not eating or drinking anything until he passed away," TJ recalls. "And obviously shock kind of sets in at first."

Ted, who lived in Waltham, spent a few weeks in two psychiatric units. And during that time his son was stunned to learn he had attempted suicide at the age of 21 — two years before he started having children.

"To think that he could have taken his life before I was born was something that was just... surreal is the best word that I keep using — that I can't really imagine," TJ says.

But in 2009, when their father got out of the hospital and right back into his routine as a truck driver, TJ and his sister, Valerie Alfeo, say he didn't talk about his depression. And they didn't ask much.

"I was scared. I mean, for me it's half of the people who created me. You still have them on a pedestal to some degree, even at late 20s, early 30s," TJ reflects. "I mean, I still would go to him, ask him for his advice. I guess I wasn't prepared to be kind of on the other end, and be the one giving any advice." 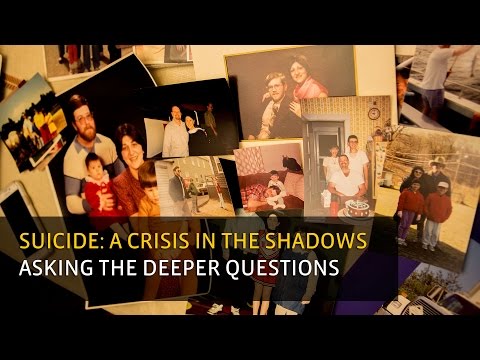 "He always made you think that he was OK and that yeah, he was taking his medication or he was talking to his doctors. I kind of stayed out of it," Valerie says, adding that her father was a "smart" or smooth talker who could make anyone believe him or listen to his stories.

"He was the joker. He could not know anybody in a room and by the end of the night everyone's listening to him and his stories," Valerie says. "I mean, so many people, even at his funeral, they're like, 'Someone who is so funny and so full of joy, and so, like, the life of the party, how could he have been that depressed?' And it was he put on a show."

Valerie now remembers times growing up when her father might have been having mood issues, but she didn't realize it. He would go in his room and blast music, just lying on his bed for a long time.

He wasn't outwardly emotional, she says, but was supportive of her and her brother — playing sports with them, going to all their games, and taking them for walks.

"He put a lot of emphasis on family time and we ate dinner together every night."

Their relationship with him faltered when they were teens, after their mother died from breast cancer and he quickly moved into a new relationship, which they say hurt.

But as young adults, TJ and Valerie grew close with their father again. And after his suicide attempt at age 52, they enjoyed spending time together, having dinners at one of their homes or out at restaurants.

Then on Thanksgiving in 2011, two years after his second suicide attempt, Ted had an outburst at their family gathering.

"The turkey was still cooking, and it was kind of past the time that he had wanted to eat," TJ recalls. "And he, to put it lightly, was acting like a child on a temper tantrum and was really just not happy, was yelling at his fiancee at the time."

He didn't eat with the dozen or more family members who were there.

"And [he] went upstairs and locked himself in the bedroom. And I mean, that was it. That was the last time that I saw him alive," TJ says.

Valerie says she can’t remember the last time she had told her father she loved him. "So not having that, being deprived of that, that’s what hurts," she reflects.

It was much different when their mother died from cancer. They had time to say goodbye.

After their father's death, Valerie and TJ learned he was suffering financial problems. He had tens of thousands of dollars in credit card debt and only a little saved for retirement.

TJ, who's a successful accountant, thinks his father was too proud to ask for help.

"If that mental illness is there from 21 [years old], and then you just, you add on kind of financial issues, it could definitely be the tipping point," TJ says.

Money and relationship problems are leading stressors that contribute to suicidal thinking, according to mental health professionals — especially in those with mental illness and at pivotal points in life, such as approaching retirement age.

The suicide rate among middle-aged Americans has been increasing for about 15 years, most notably since the economic downturn of 2008, and recent research has pointed to a link. Middle-aged men now have the highest suicide rate of any group.

TJ and Valerie hope to see the numbers go down. They take part in events to raise awareness and reduce stigma surrounding suicide. And they urge anyone with a depressed and potentially suicidal loved one to ask deeper questions than they did with their father.

"I guess part of my not wanting to talk about it was not wanting to kind of get pushed away and be somebody that was causing stress in his life, or kind of adding on to the feelings that he was going through," TJ says.

"If you know someone that's struggling, but they can make you think that everything is OK, you need to get involved," Valerie suggests. "I think you need to ask to go to the counseling sessions, you need to make it that it's not because you don’t trust them. It's that you want to be a part of it, that you want to know what it's more like to be them. Put it on you, like owning it."

Valerie, who is a high school teacher and has a 2-year-old daughter, says she and her brother are owning it: watching out for signs of crisis in friends and loved ones, her students and each other.