Walk around Boston and there’s a good chance you’ll encounter someone tinkling the ivories. That’s because the local performing arts group Celebrity Series has, for the second time, placed painted pianos around the city for the public installation, "Play Me, I’m Yours."

The 60 street instruments have been getting a lot of love from musicians — but they’re also taking a beating from Mother Nature, which got us wondering about who’s been keeping all those pianos in tune.

Tool bag in hand, Michael Wilson approaches a "Play Me, I'm Yours" piano at the Christian Science Plaza. There, a musician is at the keyboard, filming herself.

Wilson admits it causes some internal conflict: Should he — or shouldn’t he — interrupt?

“She brought her GoPro, she brought music, obviously she’s on a coffee break — but if I go over and say, ‘Oh, I need to tune the piano,’ it kind of ruins the experience for her,” Wilson muses.

Then pianist Janet Liu finishes playing, “As Time Goes By,” the Herman Hupfeld tune made famous in the film, "Casablanca." She lives nearby and says she loves hunting for pieces of music on her smartphone, then she takes the scores to different pianos.

Liu says she’s probably been to about 10 pianos since they showed up on Sept. 23.

“This is the best piano I’ve played so far,” she says, adding, “and it’s in tune. It makes a big difference — the sound of the piano to the pianist — so it makes me very happy.”

That makes Wilson happy, too. He heads a small team of technicians from the North Bennet Street School charged with taking care of the street pianos.

“There are 59 other pianos outside in the city of Boston. We’re trying to service them all every two or three days,” he explained as he opened the upright Sohmer piano, which was actually painted by his sister who’s a student at the Massachusetts College of Art and Design.

Sound Interference — And The Elements

Then there are the elements. The rain and erratic temperatures have also been challenging.

“Weather has been a reoccurring theme in this installation — which is not what we wanted, but it’s what we got,” Wilson says.

“We had a piano that got rain soaked, I spent five or six hours on that one piano, just shaving down the sides of the keys. And then some of the jobs are preparing for the weather. Last weekend I ran around and I put shrink wrap around 12 or 13 of them."

Though there are some strings made of steel and copper, pianos are mostly made of wood. "So when the wood takes on moisture it swells," he says, "and when it releases that moisture it contracts again and it changes the pitch.”

The technician calls this a pretty typical visit: “I might even just call it a day at this piano move on to the next one because I can’t do a concert tuning on any of these pianos.

“First of all, because they’re very old uprights that were donated — they’re pianos that people didn’t want anymore or couldn’t maintain, maybe they cost too much to fix. So they already had problems coming into the project.”

Our next stop is a piano in a little island of grass outside the Park Plaza hotel called Statler Park. Wilson opens it up then starts testing it out.

“It sounds terrible” he reports, laughing. “I tuned this a week ago and it sounds awful — but that’s what humidity does.”

Then some utility workers open some sort of pressure valve that releases an amazingly loud hiss. Wilson is super sensitive to noise. He’s something like a super-taster — except with sounds instead of food. Suddenly the cacophony of the city — from sirens to power-washers — become almost comical. Wilson cracks up when a siren passes by.

But like the weather, the technician says there’s nothing he can do about the noise. He just focuses on getting the job done, and says it’s all worth it to see and hear musicians enjoying the pianos around town. 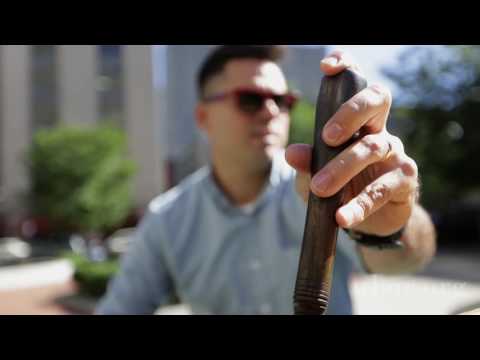