Officials say the preliminary investigation indicates that a vehicle traveling south on the northbound side of Interstate 495 in Middleborough, about 35 miles south of Boston, struck a vehicle heading in the correct direction at 12:11 a.m. Monday. 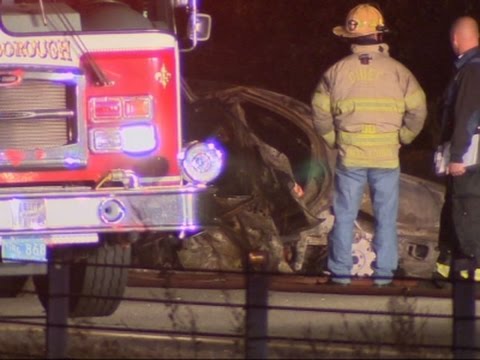 The driver and lone occupant of the wrong-way vehicle also died. Police only identified her as a 31-year-old woman from Fall River.

Police say they plan to release the names of the victims on Tuesday.

State police Maj. Anthony Thomas says it's too early to determine whether speed, alcohol or drugs were involved.

Thomas did say that "[t]here is no indication that time allowed for evasive action by the northbound motor vehicle operator to avoid the vehicle traveling the wrong way."

The northbound side of the highway was closed for about five hours during the investigation.

With reporting from The Associated Press and The WBUR Newsroom

This article was originally published on October 24, 2016.