In their act, the folk duo Anna & Elizabeth (Anna Roberts-Gevalt and Elizabeth LaPrelle) tell the story of a Kentucky fiddler named Lella Todd. To begin the tale, LaPrelle stands behind a piece of paper that is stretched between two spools inside a large wooden frame. The parchment is marked with images: Todd, rendered in a dark silhouette, totes a rifle in one illustration, and in another she leads the neighborhood children in a game of hopscotch. LaPrelle turns a crank, and the pictures, which are lit from behind, begin to move. “She would take her fiddle out onto the front porch. We’d gather ‘round, and she would play for us,” LaPrelle recites. “And when Miss Lella played, us kids would dance and dance.” Roberts-Gevalt picks up a fiddle and quietly slides into a tune, the bubbly melody made wistful by the pictures passing slowly from view.

Todd’s fiddle playing is preserved in an archive at Berea College in Kentucky. But Roberts-Gevalt and LaPrelle were able to track down one of her neighbors, a woman named Letha Sexton. It is through her memories that we get to know Todd, whom Sexton refers to as “Miss Lella.” The piece turns on the kind of intimate particularities that only a close friend or neighbor would know, conjuring Miss Lella in vivid detail without resorting to sentimental embroiderings of her inner life. The story, which is really a series of vignettes, revels in everyday joys and brushes obliquely against pain. It is remarkable for the way that it frees its subject from the burdens of archetype. Yes, Miss Lella engages in many of the stereotypical activities of rural mountainfolk: hunting, fishing, playing for square dances. But her role in her community is distinct, with no ready analog in the popular imagination. Her relationship to children is not that of a mother, but of a playmate and mentor. Music is a passion, though not a profession. Her husband is a peripheral figure, feeding biscuits to the cat under the table. Miss Lella, Sexton remembers, could skin a squirrel faster than any man.

Anna & Elizabeth, who will appear at Club Passim on Wednesday, Nov. 16, sing and play traditional music, some of it gleaned from archives, much of it taught to them by their elders. The duo’s close harmonies and spare arrangements evoke similarly vintage performers like Gillian Welch and the Milk Carton Kids. But what sets Anna & Elizabeth apart is the seamless fusing of ethnography and art. The pair’s most trusted tool, that box of sliding pictures, is a modern riff on a 19th-century storytelling aid called a “moving panorama,” known in its current form as a “crankie.” 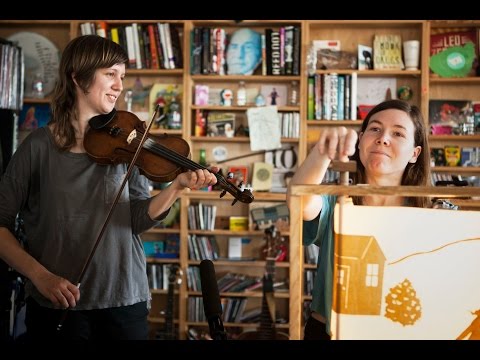 Roberts-Gevalt remembers being captivated by her first encounter with a crankie on a visit to Portland, Oregon, while she was a student at Wesleyan University in Connecticut. “It was so amazing. And then when I was finishing up at Wesleyan I got the costume designer lady to let me do an independent study for a credit called, like, 'Visual Interpretations of Ballads,' ” Roberts-Gevalt told me recently. “And then it just kind of sat in my closet for a couple years, before I met Elizabeth.”

Roberts-Gevalt hails from Vermont and became enamored with the banjo during college. LaPrelle grew up in southwestern Virginia, singing ballads and playing in her family’s band. The two met, in 2011, in Virginia, where LaPrelle returned after college and Roberts-Gevalt went to immerse herself in the local music scene. I caught their set, which was deftly paced and utterly absorbing, this past August at Sidmouth Folk Week in England. More recently, I spoke to Roberts-Gevalt, who lives in Baltimore, and LaPrelle, who lives on a farm in Virginia, in separate phone calls a few days apart. Not surprisingly, they echoed many of each other’s thoughts, though each possessed a deep and distinct understanding of her artistry.

“Somehow there's so much wonder in those everyday things,” LaPrelle told me, recalling the conversations with Sexton that formed the basis for the “Miss Lella” crankie. “Some of that comes from Letha's telling… and the way that she remembered this person as a magical person. The way she spoke of her with a real — I almost don't want to say reverence, because there's so much silliness and laughter in her memories as well. But she would say, ‘I want everyone to know about Miss Lella.’ Or, ‘My hope in life was that I would be like her when I grew up.’ And I find that so inspiring, for a musician who never became famous the way we understand Beyoncé to be famous. She made a real impact on the people around her, and she did that with art.”

Roberts-Gevalt tells me that the crankies help convey what is lost when folk music is put onstage. “We're basically taking this music out of context and presenting it. I think that's totally OK to do. You can put it in a new context and that can be really exciting. But part of what I think the players are drawn to is the context. Part of what I loved about folk music at the beginning was, ‘Wow, here's the type of music that people play for fun, with their friends, with their parents and grandparents.’ It's a way of being, a social thing.” 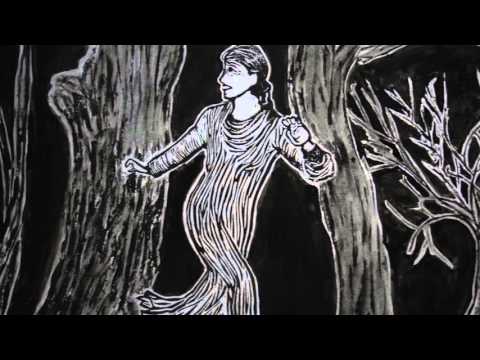 Not all of Anna & Elizabeth’s act is heartwarming. When I saw them in Sidmouth, they performed a song, called “Greenwood Sidey,” about a woman who secretly gives birth and then kills and buries her twin babies in the woods. Wracked with guilt, she cries out to the infants’ spirits, wanting to know what her punishment will be. They respond: “Oh seven long years on earth to dwell/ All alone and lonely oh/ The rest of your days you’ll spend in Hell/ Down by the greenwood sidey-oh.” LaPrelle and Roberts-Gevalt perform the song with the aid of an ink-black crankie etched in crimson and white.

“That particular song and that particular version seem really modern to me, and connected to a lot of things that I think are still important, and maybe quiet, in society,” Roberts-Gevalt says. “Why was she alone? Where was the father? Is this something that still happens? Why didn't women feel like they could raise children alone?”

“I think a lot of people come to folk music because it's nostalgic, and because they think it's cute and sweet,” she continues. “Ballads are not always about the good old days. I feel like we’re operating in this folk music scene and feeling frustrated with the perception of folk music as something that is so nice all the time. It’s not nice! It's sometimes evil, it's sometimes creepy, it's sometimes uncomfortable. And wanting to present it in a way that isn’t always about soothing our audience all the time. The more we make work, [the more] we're interested in that tension — how much do you soothe the audience, and how much do you try to ask uncomfortable questions?"

“Greenwood Sidey” comes from Anna & Elizabeth’s 2015 self-titled album. Much of the duo’s current act is based on new material, and they plan to record another album in the spring — as Roberts-Gevalt explains, they must first get through the research and crankie-making phases before they can even think about the studio. For this latest project, the pair focused solely on music from Virginia and Vermont. The goal was to connect more deeply with the histories of their homes.

LaPrelle, whose mother is a ballad singer, tells me she has always been captivated by the genre. “I find the imagery just really compelling. It's very transportive. It's like reading a great book, or like watching a movie. I can really see it in my mind's eye.”

And yet the music continues to offer up fresh mysteries, even as it blooms to life on a crankie’s glowing canvas. “Some of it is idyllic and you wish you could go there. And some of it is horrifying and you're so glad you don't live back in the past,” LaPrelle says. “You're wondering about something you'll never really know. You have this remnant. And it's the only way you can hear from people that are gone.”