"We are the Saudi Arabia of offshore wind for the planet," Markey says. "We have an unlimited potential to see this unfold."

The five-turbine Block Island Wind Farm will harvest just a modest amount of the region’s offshore wind potential, but it could also be the start of a new industry and thousands of jobs. And coastal cities and companies in the region are betting Block Island Wind will give them a first-mover advantage.

A Trip To The Turbines

The captain of the high-speed ferry Ava Pearl powers up the catamaran's duel diesel turbo engines. We leave Narragansett Bay, picking up speed as we hit open water and head to Block Island Sound, 15 miles south. It's a course that offshore wind advocates believe charts the way to the nation's renewable energy future.

On board are passengers who just a decade earlier might have rebelled at setting sail together, but on this day they're enjoy bagels, pastries, coffee and conversation.

"Look it, we need jobs, but more importantly we need a clean environment," says Roy Coulombe, business manager of Local 37 Ironworkers, which serves southern Massachusetts and Rhode Island. "We have children and grandchildren, just like everyone else. We breathe the same air and drink the same water as everybody else."

This trip to the Block Island Wind Farm -- paid for by the group BlueGreen Alliance -- brings blue collar workers, green environmentalists, business and elected officials together, sharing stories about the fruits of their eight-year labors to make the nation's first offshore wind farm possible. 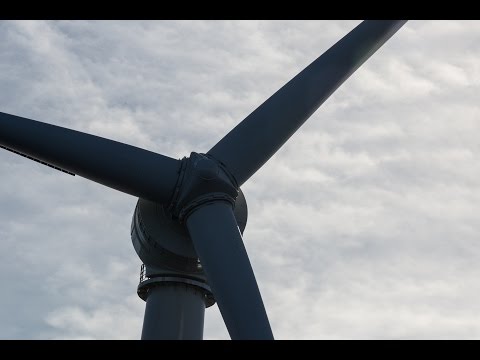 Also on board the ferry is environmentalist Catherine Bowes, of the National Wildlife Federation, which has backed the Block Island Wind Farm.

The federation was also a big booster of what was supposed to have been the nation’s first offshore wind farm: Cape Wind. That project called for 130 turbines off the southern coast of Cape Cod, but it stalled for a dozen years in courtroom battles waged by fishermen, Native American tribes and wealthy residents onshore. In the end, Cape Wind lost the financial war of attrition, as utilities that had promised to buy the electricity from the wind farm pulled the plug on the deals.

“One of the things that Cape Wind unfortunately suffered from was a lot of conflict and a lot of opposition from those who didn’t want to see the project,” Bowes says.

Cape Wind may be dead in the water, but it laid the legal, environmental and regulatory groundwork that made the Block Island Wind Farm possible.

Bowes says the Block Island project "is an example of how you do it right, not only from the ocean planning process that selected the site but also how the company went about the construction."

The site three miles off Block Island was selected because the wind blows strong and steady precisely when it's needed the most -- when electricity demand peaks in the late afternoon and early evening.

"This is the sound of capacity," he says over the sound of wind. "In the Rhode Island/Massachusetts wind energy area, the wind is as strong as any wind resource anywhere in the world. This is truly a globally significant wind resource, which allows for this level of energy to be produced."

Ten percent of the wind farm's output will be used replace Block Island's diesel electric generators. The rest will flow by undersea cable to the Rhode Island coast and beyond into the region's electrical grid.

These aren't quaint old world windmills. Each General Electric turbine generator weighs 400 tons and is about the size of a school bus. From sea surface to horizontal blade tip, the towers are twice the height of the Statue of Liberty.

"These turbines are approximately 600 feet tall," Morrissey says, "and the blade width represents a size, if you put the center of the nacelle at second base of Fenway Park, the blades would be overhanging all three of walls of the stadium."

Building something this big and complex offshore in the open sea is expensive. That’s why the price of electricity produced by the Block Island Wind Farm will be three times what the utility National Grid charged Massachusetts customers in October.

But Morrissey says change is in the air.

"Just like any technology, the cost of offshore wind will continue to come down and is likely be cost competitive with any new energy source in 10 years," he says.

Block Island As A Milestone For Big Changes

In the coming decade Massachusetts will require utilities to buy 1,600 megawatts of electricity produced by offshore wind. That’s more than 50 times Block Island’s output. It’s enough to power a third of the homes in Massachusetts. And it will reduce planet warming carbon emissions equal to taking hundreds of thousands of cars off the road.

To accomplish this, offshore wind developers are looking toward a more distant horizon. Deepwater Wind and two other developers have leased 750,000 acres of federal ocean 18 miles off Massachusetts' coast, hoping to turn them into vast wind farms — out of sight but with money in mind.

"It's important to note they go so far offshore that people can't see them at all," Morrissey says. He says Deepwater Wind plans to install hundreds of turbines, far bigger, farther out to increase the power per tower.

"It's going to happen, I believe," labor leader Coulombe agrees.

He says there are times when Denmark, the world's leader in offshore wind, produces so much electricity the nation exports it.

"If you look over at Europe, there are well over 3,000 of these things over there in the water there, right?" Coulombe says. "And they're building them in Japan, China, South America. Until we get a bunch of these going, you know it's going to be a little more expensive, but once we get a pipeline going, the prices will come down, we'll get some manufacturing going on, and we'll be good."

Block Island marks a milestone. The nation is undergoing a clean energy transformation and Massachusetts has been gearing up.

One of the world's largest wind blade test facilities is in Boston's Charlestown. It was there that U.S. Energy Secretary Ernie Moniz recently announced the National Offshore Wind Strategy.

"In principle we could generate roughly twice as much electricity as the country currently uses from offshore wind," Moniz said.

The Energy Department predicts by mid century offshore wind will also generate 160,000 new jobs. The challenge will be finding enough skilled workers. According to the Bureau of Labor Statistics, "wind turbine technician” is the fastest growing occupation in the nation.

And move here. General Electric has been on a buying spree to make the now-Boston-based industrial giant the world's offshore wind energy powerhouse. It bought a stake in the Block Island Wind Farm, acquiring some of the federal tax benefits and credits. It also paid $1.6 billion for the world's largest wind blade maker, and acquired a French energy and offshore wind company for $10 billion.

The future of wind is on the horizon and New England communities are competing for a piece of the action.

"We want in the long run to be seen as a center of green energy on the East Coast," says Jon Mitchell, mayor of New Bedford.

The city is home to the nation's largest commercial fishing fleet and it's where developers of the more distant offshore wind farms plan to stage their projects.

"[But] just because we've done a lot of work on this in the last few years doesn't guarantee success," Mitchell says. "We've got to be ready to compete with other cities. We have to outsmart them. We have to out-hustle them. And that's what we intend to do."

The political, economic and corporate interests are now aligned -- at least for Block Island. Though the winds could always change.

Still, from the ports where sailors once set sail in search of whale oil to satisfy the world's need for fuel, today there are hopes New England will begin the transformation of the nation's energy landscape into a vast clean renewable seascape.