With just days left in office, Secretary of State John Kerry was in Massachusetts on Monday urging action on climate change.

The former Massachusetts lieutenant governor and U.S. senator got a standing ovation from a receptive crowd at MIT's Sloan School of Management.

"Thank you very much for a generous welcome to somebody who is about to become one of the most visibly unemployed people in America," Kerry joked.

Kerry spoke for an hour on climate change and his plans for the future, only briefly mentioning the incoming administration.

"I know the clock is ticking, but the truth is I am really looking forward to new adventures and I guarantee you, because I've been doing it all my life, I will not stop speaking out about the issues that matter most to me and I expect to you too," he said. 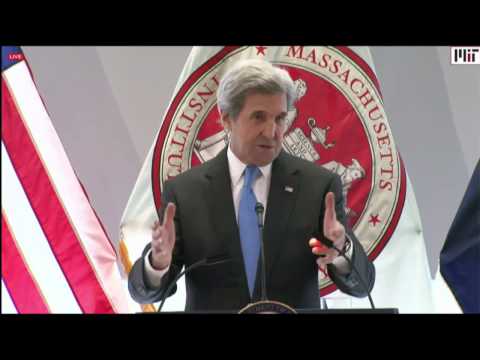 Kerry has given the same speech he delivered Monday at MIT many times in the four years he's been secretary of state — including at the 2015 United Nations Climate Summit in Paris, and in Beijing last summer. His message then and now: We're running out of time.

"And unless we take the steps necessary to change the course that our planet is on, the impacts that we have already seen will pale in comparison to what we will witness in years to come," he said.

Kerry warned that last year was the hottest on record, and the last three decades the hottest in history. He said last month on a trip to Antarctica he got a vial filled with air — it registered 401 parts per million of C02, 50 parts more than scientists say will cause catastrophic, unpredictable climate consequences.

"Some thresholds if we cross them can't be reversed," he said. "In other words, we can't wait too long to translate the science into the politics that are necessary to fix it."

Kerry called the fight against climate change the greatest investment opportunity in history. He said markets and technological advances have made renewables cheaper than fossil fuels. And Kerry said he's changed his mind about nuclear power, which he once opposed.

"Given this challenge we face today, and given the progress of fourth generation nuclear: go for it," he said. "No other alternative, zero emissions."

According to Kerry, in the U.S. today more people are employed in the renewable energy industry than coal, gas or oil sectors.

"Now this really shouldn't be a tough call, but as I said we face resistance of a strange combination of doubters and people making a lot of money off today's paradigm," Kerry said. "That's what it's all about."

President-elect Donald Trump once called climate change a hoax created by the Chinese. During his speech Kerry never mentioned the incoming administration by name, but the target of his overall message was clear.

"In less than two weeks there's going to be a new person in the Oval Office," he said. "I'm not going to speculate about the policies that our president-elect and his secretary of state will choose to pursue, but I will tell you this: In the time I've spent in public life, one of the things I've learned is that some issues look a lot different when you're actually in office compared to when you're on the campaign trail."

Kerry didn't take reporter questions, joking that "in a couple of weeks I'm going to have time to do that." He praised Boston Mayor Marty Walsh, who was with him last summer in Beijing at a climate summit for U.S.and Chinese mayors, and who attended Monday's speech at MIT.

Boston will be hosting mayors of major Chinese cities for a climate summit next summer. Kerry says he's going to be there.