When my dear friend Sean Bunn found out earlier this year that he has two grown biological daughters, he had one immediate thought: Maybe this is why I'm still alive.

"This feels to me like an absolute wonderful gift," Sean says.

You see, Sean, who's 47 years old, has been sick — very sick. Doctors initially thought he wouldn't make it through last year.

But he's very much here. And now I'm sitting with him in his living room in Raleigh, North Carolina. It's the night before he's going to meet one of his daughters for the first time.

"I cannot wait ... I know I'm going to have trouble sleeping tonight," he says. "I have a new family — and how great is that?"

Sean always wanted to marry and have children, but it didn't happen. He donated sperm while he was in college at the University of North Carolina at Chapel Hill in the late 1980s. His daughters he just learned about are half sisters. And they’ve been hoping for years to find him — the man who gave them half of their DNA.

26-year-old Nikole Ilse, who goes by Niki, is the one flying to meet Sean.

"When I found Sean it felt like this big gaping hole inside of me could finally be filled and closed, because I had a lot of love to give this person that I knew existed; and it was like radiating out of me with nowhere to go, just bouncing off the walls of the inside of my heart," Kelly reflects.

The Search Is Over

The next morning at Raleigh-Durham airport, Niki's flight has landed. The ride here with Sean and his parents was full of excited energy.

Walking into the terminal, Sean says he's nervous. I mention that "the girls," as he calls his newly found daughters, did a lot of detective work to find him.

"Just amazing work," Sean says. "And I have no idea how they managed that, but it's awesome that they did."

Sean says he thinks life has a way of giving you just what you need at exactly the right time. He inches up as close as he can to the walkway where passengers arrive from their gates, and he spots Niki.

"That's her! Yes! Woo hoo!" he says excitedly. Niki bursts into tears as she reaches him, and the two embrace.

In between hugs it quickly becomes clear that the pictures and FaceTime calls didn't lie. Sean and Niki look like father and daughter. And Sean's mother, Marion Bunn, looks like the grandmother.

I ask Sean if it feels real.

From Advocate To Patient

Though Sean has lived in North Carolina for almost 30 years, he has strong New England ties. He lived in Duxbury throughout high school and Maine before that. He and I met in 1987 as freshmen at Boston University and became fast friends. It was easy with such a gregarious guy who wears his heart on his sleeve.

Then sophomore year, Sean transferred to UNC. He says he donated sperm several times and took part in fertility research at the university. He didn't tell his parents about it. He says he saw it as a way to make a difference for people who were struggling to have kids.

"If there are things where I'm in a good spot to help somebody do this, well then I'd be stupid not to try and help," he says.

And if you know Sean, you know it isn't a stretch that he was actually thinking about that.

Sean is always doing things for other people. For the past 20 years or so, it seemed he was always organizing a fundraiser or other effort to help someone with cancer. He's a rabid Red Sox fan — in fact he was the governor of Red Sox Nation for North Carolina until he got sick. He founded a 1,300-member Red Sox fan group in the Raleigh-Durham-Chapel Hill area that raises thousands of dollars for The Jimmy Fund, which supports the Dana-Farber Cancer Institute.

This is all why it was especially shocking to find out in September of 2015 that Sean himself had brain cancer — the worst form of brain cancer. Doctors at Duke said it was one of the biggest glioblastomas they had ever seen. They did a 10-hour surgery to remove what they could, started radiation and chemotherapy, and shortly thereafter predicted Sean would live about six months or maybe a year. He's beaten that prognosis soundly.

'I Always Looked With A Sense Of Urgency'

Back at Sean's apartment after getting Niki at the airport, his other newly discovered daughter, 24-year-old Kelly Best, arrives. She looks like him, too — with dark hair, big eyes and a round face. Oh, and she's a Red Sox fan. She even has a Red Sox shower curtain — what are the chances? She and Sean have already spent many hours together over the course of their first few meetings.

This visit is part family reunion, part family history lesson, part therapy session. Sean's parents and Kelly's mom are here. There are some tears and lots of laughter.

And there's lots of talk about how Kelly and Niki found each other a few years ago. They were both registered on various ancestry and donor sibling websites. They had even seen each other's posts and knew that they were each conceived with donated sperm from UNC. Kelly had had a bunch of DNA tests done. Then Niki decided to get her DNA tested through the site 23andMe. She was stunned when she received an e-mail saying her DNA had matched with about 900 people. Most of them were third cousins or fifth cousins.

“I realized that I could sort by percent shared of genetic information ... And it immediately refreshed with Kelly Best as my half sibling. It popped up and said half sister, and I was like, ‘Oh, look at that, I have a – what?' " Niki recalls, laughing.

The sisters connected with each other immediately, and the race to find their biological father picked up steam. Kelly had been pretty much obsessed with it since her mother told her a couple years earlier, when she was 19, that she was conceived with donated sperm. She says she went through an "identity crisis." Niki had found out when she was 10 years old. The sisters say they weren't looking for a father; they love their dads. But they wanted to know where they themselves came from. They wanted the sperm donor to know who they were. Their parents supported them in their search.

"If I could say anything to you this holiday season, I would say thank you. Thank you for donating so that I could have life. It's been a pretty incredible life. I'd love to tell you all about the wonderful things I am doing with the life you selflessly gave me. I hope I would make you proud."

She had already drawn up a family tree based on some DNA matches and information from distant cousins she had met. But she couldn't seem to get any further. The fertility clinic wouldn't give her any information, though Niki's family had obtained the anonymous sperm donor's medical records because she had a health problem when she was a baby. Those records would later prove to be Sean's.

Then in January, Kelly found out from Ancestry.com that her DNA had matched with a "predicted second cousin" — a man who turned out to be her first cousin twice removed. She made contact with the new cousin, and suddenly the family tree led to Sean Bunn as her biological father. A quick Google search revealed Sean was sick; hundreds of friends and family members were now raising money to help him — the man who had helped so many.

"I always looked with a sense of urgency when I looked, because I could picture the donor in a hospital bed somewhere. And I was like, 'What if I stop looking and he dies the next month, or what if I stop looking too soon?' " Kelly recalls. "And then that was actually the situation. And that was the most painful part. Because there was all of this joy of, I've finally found him — and he's dying."

Niki describes it as "heart-wrenching" to know that Sean thinks he's lived this long so that he can have time with his two biological daughters, and they can get to know him. 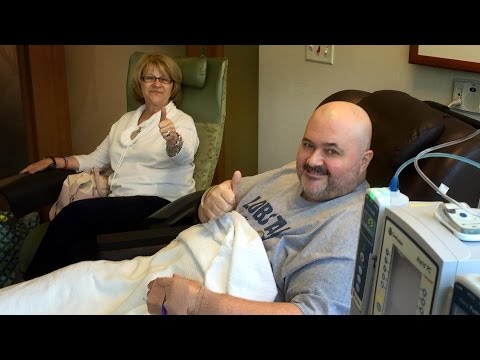 "Of all the things on the radar screen, this was not even a bleep!" Sean's mother, Marion Bunn, says of learning about Niki and Kelly.

What was on the radar screen were MRIs, chemotherapy infusions, and other doctor appointments for Sean; keeping track of the 31 pills he needs to take every day; and helping him navigate his new world of not being able to drive or read or always speak clearly. Those things are caused by the damage done to his brain and a resulting condition known as aphasia.

But there was also constant amazement that for the last year, every brain scan Sean underwent showed that the remaining visible tumor was shrinking. The combination of a chemotherapy treatment called irinotecan and a cancer drug known as Avastin was working.

Asked if she and her husband ever hesitated to welcome two granddaughters — their only grandchildren — into their lives, Marion responds, "No way — they're our family!"

They're part of Sean.

"You have that same outpouring of love that you never knew you were capable of, but it's there, and ... it's just such an experience," she adds.

A paternity test has confirmed — to 99.997 percent certainty — that Sean is Kelly's father and thereby Niki's.

"If life would've given me a bad break and cancer had gotten me before, I would have missed this. And that would have been just horrible. It would have been crushing," Sean says. "I'm so happy that at the end of the day, we can say, 'How lucky were we to deal with this at the right time?' "

Glioblastoma is not believed to be hereditary, except in rare cases in which some specific genetic syndromes are involved. That alleviates concern that Sean's daughters could be predisposed to it.

"Watching him come back to life ... for a father who's thought about the possibility that my son may not be around — he may pre-decease me — that's been huge for me," Ben says. "And so I just wanted to thank you guys for letting us share the lives that you have and tell you how much new life and new energy and new happiness and new joy that all that has brought to us."

"I just stand in awe at the miracle that we're all able to be in the same room together right now and be like this little hodgepodge family," Kelly says.

Niki and Kelly have pointed out to Sean and his parents that that family could grow; there could be more biological children out there as a result of Sean's sperm donations.

His parents say they'd welcome that news — more grandchildren, more pieces of their son to carry on.

Sean's most recent brain MRI came up NEAT, which means no evidence of active tumor — incredible news for a glioblastoma patient.

He says if any more biological children find him, he has plenty more love to give — for as long as he's able.