There are many middle-aged musicians and fans who will tell you how proud they were to be punk rockers back in the day. Joey Santiago, lead guitarist for the Boston-spawned, post-punk Pixies, is not one of them.

“I was an angry youth, that’s for sure,” the 51-year-old Santiago says, on the phone from Washington, D.C, “but I was more in the realm of AC/DC. I lived in the burbs. I was stuck there.”

In 1986, though, before Pixies had even played a gig, Santiago braved the punks and poseurs to try and gain entry into the stylishly decadent, semi-exclusive Boston punk club, Spit.

“They wouldn’t let me in!” he says. “Right there at the f------ door it said ‘No Alligators!’ I had a f------ [Lacoste] alligator shirt on. I’m from Longmeadow, Mass. Remember that ‘Preppy Handbook’? We were ranked number eight for preppy towns. I have five brothers and wore hand-me-downs and I didn’t give a s--- about what clothes I wore. I just didn’t want to stink."

(Note to readers: For a more precise transcription of Santiago’s answers, you might insert the f-bomb before every other noun or verb.)

“So, I had my older brother’s clothes and I just wore ‘em and I had my little alligator on and they’re like ‘No’ and I’m like ‘What?!’ How punk is that really? Kicking someone out because they look different! What a moron with an attitude. He didn't even talk to me. Just pointed at the sign that said no alligators. Bite me. You have to conform to be a punk.”

Santiago’s not a punk, but has a punk-rock attitude. And, he implies, this is something that could apply to Pixies as well: “I think the kids probably relate to us as punk because we’re honest with ourselves. We’re not trying to be anyone else. The thing underlying everything is we have is this particular sound — the chord progressions are so quirky, there are hidden tricks in these things we do, like we drop two beats here and there.”

Pixies have mastered the idea of a full-thrust, drop-back, then even-more-raging climax. It’s a strategy Nirvana — among others — took to heart in the early ‘90s.

Pixies — Santiago, singer-songwriter-guitarist Black Francis (né: Charles Thompson IV), drummer David Lovering and new bassist-singer Paz Lenchantin — are currently touring in support of their sixth full-length album, “Head Carrier,” the second since their reformation in 2004. They have sold out House of Blues Friday and Saturday and the Paradise Rock Club Sunday. 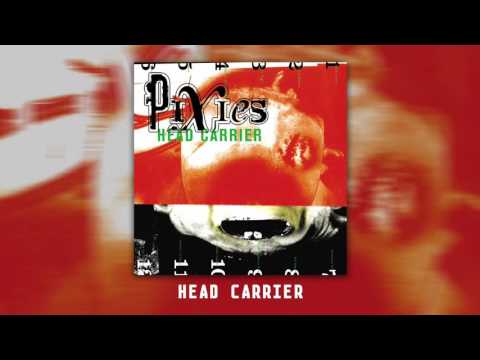 Expect a full-throttle 90-minute show with little chat to the audience. Santiago says they’ll play five or six songs from “Head Carrier,” swapping them around each night in Boston. “I’m so proud of the album, beyond proud of it,” he says, “and when we play it live, it’s so much fun to play. People are singing along. Not all of them, but the ones in front who are willing to get their blood squeezed out of them, they are.”

Pixies remain a no-image/high-intensity band. Their forte is the art and the joy of noise coupled to the love of pop and psychedelia. Pixies offer bite-size jolts of punk-pop bliss: anguished, but shimmering, nuggets, some of them rooted in Francis’ dark, B-movie, bloody-minded subconscious and untainted by commercial concerns.

"I am the Ernest Hemingway of indie rock," Black Francis told me back in 1990, with a laugh. "If I could keep them short and brief and impactful and have them make linear sense then I would be a genius, but I'm not. So I'm a surrealist."

One of his biggest influences is the director David Lynch. “All 'famous' rock music makes almost no sense to me,” Francis said. “All the really good stuff is terribly obscure or psychedelic. Too many people have too many words in their songs. So, their songs make sense. But the songs are boring and long and no one cares if they make sense."

Pixies music can be anthemic — “Gigantic,” “Here Comes Your Man,” “Monkey Gone to Heaven” — and is not without sly humor. “Some people get it,” says Santiago. “There’s a lot of humor within us. I think once you start exploring this kind of music, your mind tends to be a little bit open.”

Thompson and Santiago had met at UMass Amherst, dropping out together in ’86 and moving to Boston. They jammed with new acquaintances Lovering and original Pixies bassist Kim Deal, originally practicing in Lovering’s parents' garage in Burlington.

“Charles and I went to see a lot of bands when we got there and timed their set,” Santiago says. “We thought 20-30 minutes was a good-timed set to get a gist of the band. We wanted to play live as soon as possible so we timed the songs we were working on.”

Pixies first gig was in 1986 at the long-defunct Cambridge club, Jack’s. Except they were mis-billed as “Puxies.” “The only people that were there were family, friends and bosses,” says Santiago.

Signed to the hip English label 4 AD and later Elektra in America — Pixies quickly established themselves as a force on the alt-rock scene, scoring with their first two albums, 1988’s “Surfer Rosa” and the following year’s “Doolittle.” Pixies were named Rolling Stone’s Best New American Band of 1989; the same year Spin named them Musicians of the Year.

When the band is recording, Santiago is the last to come in, adding his lead guitar tracks to the songs. “It really means a lot to me what Charles says in the studio,” Santiago says. “'All right, time to slap the guitar on! After it’s done, now it sounds like the Pixies!’ That’s pretty awesome; I feel really good when he says that. Then again, the other voice in my head goes, ‘Why wouldn’t it feel good? We’re a four-piece band.”

All rock bands of Pixies duration have their own unique long, strange trip. For Pixies, there was explosive success, intra-band tension, a 1993 breakup — with Black Francis establishing a smaller-scale offshoot career as Frank Black — and then a 2004 reunion. “There had always been the anticipation,” says Santiago. “People egging us on to reform, get back together. When we were going to reconvene they offered us Coachella. I didn’t know what Coachella was – swear to God, I never knew what it was. What is Coachella? Someone explained it to me [a huge multi-band, multi-day outdoor festival in California, going since 2001]. I said, ‘Oh, I don’t want to go to that. I mean, as a fan.' Why? All day!?”

But Pixies played the show and others. Santiago says he was “shocked that there was the young audience, amazingly young, that was out there. After two years, it was like, ‘What, we’re still going?!’ Crazy.”

They played big festival shows, did a lot of touring in 2009 featuring the hit “Doolittle” album, briefly replaced Deal with the Muffs’ Kim Shattuck in 2013. When Shattuck exited, Lenchantin entered in.

“Paz gave us a new lease on life, that’s for sure on the Pixies thing,” says Santiago of the former A Perfect Circle bassist. “She’s light, very intelligent, goofy. She’s found her home. Welcome. Don’t leave us! Stay awhile.”

Santiago says Lenchantin fits in with the ethos of other Pixies. “Maybe, when people see us live it’s like ‘Look at these nerds!’ Inherently — deep down inside — we’re not [rock stars]. We probably did this by accident. We just wanted to make music. We didn’t want to be rock stars. I can’t even do it. I feel funny.”

“Last night, Charles and I were hanging out in the lobby drinking club sodas and we were talking about how we felt so funny on stage,” continues Santiago. “We usually do this about two weeks into a tour. We go on stage [and think] ‘What are we gonna do? What else do I have to do out there? How could we step this up?’"

Ultimately, Santiago says, “You just gotta go on stage and think, ‘They just want to hear the right f------ notes.”

There was a time where, Santiago admits, the fans weren’t hearing quite the right notes from him in concert. It was the booze. “I was drinking after the show and, really, before, too,” he says. “It never really affected us, not that much, but, yeah, it did affect us. I’m not doing a million-notes-a-minute, but I was always a functioning [alcoholic], which is pretty dangerous.”

Santiago got in touch with a longtime friend from Boston, Johnny Angel Wendell, one-time leader of the Blackjacks and Thrills and currently an author and radio talk show host. He had been living in Los Angeles for decades, as had Santiago. Wendell's also been sober since 1985.

“I called him up a bunch of times wondering what to do,” Santiago says. “I went, “Oh God, I’m having a problem here. I don’t know what to do. Am I really [an alcoholic]? One night, I said ‘F--- it, Johnny, everyone else thinks so.’”

He detoxed a week before entering rehab Dec. 14, 2016. It forced them to cancel a record-release press tour for “Head Carrier,” and appearances on “Conan” and “The Late Show with Stephen Colbert.” (They made up the “Conan” date April 27 and will play “Colbert” May 26.)

Santiago refers to his post-rehab self as “the new Joey,” adding, “I feel so good it’s unbelievable. I’m getting more comfortable in my skin now. I’m playing so much better now and, of course, there’s my self-esteem. I’d say, ‘I sucked so bad all those years.’ Then, I’d get to this guilt thing, I hadn’t been giving it my all, I hadn’t been there 100 percent.”

Santiago says the current tour is “dry. The crew are drinking less because there’s no booze backstage anymore and they feel a lot better. And they see me and I got a little Benjamin Button [thing going on, looking younger], losing 20 pounds and playing better and being in a better mood. I didn’t want a dry tour because I didn’t want any resentment around me, but our manager said so, and, wow, we feel so much better in the morning.”