A half century ago, the Summer of Love was wafting in and this convergence of peace, togetherness and knee-buckling hallucinogens cried out for a soundtrack. It had to be fun, it had to be trippy, and it best not sound like anything in dad’s record collection. Leave it to the Beatles to deliver.

Some had wondered if the band was finished amid rumors of infighting and the announcement that its touring days were over. Also, the band’s recent one-two-punch of a single, “Strawberry Fields Forever”/“Penny Lane,” failed to top the U.K. charts, kept at bay by none other than Engelbert Humperdinck’s “Release Me.” Could it be the four lads from Liverpool were no longer so fab?

The band offered a resounding retort to the doubters on May 26, 1967 (and the following week in the U.S.), when “Sgt. Pepper’s Lonely Hearts Club Band” was released. It rushed to the top of the charts, was almost universally loved by critics and subsequently declared the most influential album of all time. 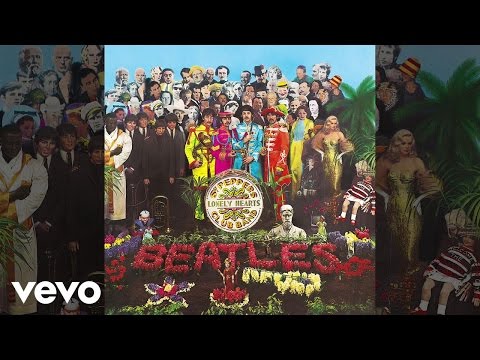 It also had the distinction of helping drive Brian Wilson over the edge in his attempts to top it, motivated Frank Zappa to parody, and inspired Lou Reed to devote himself to making music that wasn’t “gooey pap.”

Zappa, Reed and the other haters may have simply been humbled by the record’s audacity, for the Beatles, despite some ennui settling in around the edges, entered the studio that February full of confidence. Taking its cues from recent expectation-stretching albums such as the Beach Boys’ “Pet Sounds,” Bob Dylan’s “Blonde on Blonde,” The Rolling Stones’ “Aftermath” and even the band’s previous album, “Revolver,” “Sgt. Pepper” pushed the experimental, reflected society back at us and did it all while promulgating some of the catchiest melodies and exciting performances on record.

Naturally, there’s a special 50th-anniversary edition to commemorate the album’s debut. As a longtime Beatles fanatic, I hadn’t spun the record in many, many years feeling that I’d already heard it enough for six lifetimes and fearing that whatever vestiges of my punk self remained might feel jaded about “Sgt. Pepper.” Or what if I listened again to this central document of my youth and decided it should be relegated to the bargain bin of history? (Remember The Clash’s “Phony Beatlemania has bitten the dust”?) Well, the joke’s on me: I should have kept listening. The remastered “Sgt. Pepper,” with its punchier and more spacious sound, is a revelation.

Giles Martin, son of the band’s longtime producer George, who was undisputedly the fifth Beatle, helmed the remixing and remastering and he’s not only done the obvious — creating a hotter mix, bringing the vocals more to the fore, giving the individual tracks of each song more room to breathe — he pays attention to the small details. The little licks behind the opening guitar stabs of “Getting Better” cry out to be noticed now. Listen to the four-in-the-bar bass-drum combo locked in beneath the bridge sections of “When I’m Sixty-Four,” or the gentle piano chords behind the orchestrated verses of “She’s Leaving Home.” Meanwhile, throughout, those famed harmonies sound sweeter than ever.

The standard issue 50th anniversary edition also features a plethora of extras, including at least one early take of each track, as well as different versions of “Strawberry Fields” and “Penny Lane.” (There’s also a six-CD set with even more outtakes and a documentary.) Hearing the “Sgt. Pepper” tracks in their embryonic stage highlights the raw talent, instrumental prowess, instinctual brilliance and technical wizardry that came together to create the final versions of these songs. Martin was smart enough to use the first generation tapes for this project and a mix of old and new technology to bring these old songs back to life. The accomplishments of "Sgt. Pepper" are even more remarkable given that it was originally recorded on a machine barely more sophisticated than the Tascam four-track I used in my bedroom, back in my high school days.

The “Sgt. Pepper” anniversary edition is available in three different packages, including a single CD featuring Martin’s new stereo album remix; a double album and CD set with the new version of "Pepper" and in-progress versions of each of the album's tunes (this is the version available for download); and a six-CD set with multiple mixes, 33 outtakes, and video content. Each edition comes with a special booklet and the extras that were included in the original album.

The outtakes on this edition of “Sgt. Pepper” bear out the fact that this is McCartney’s album. The overarching concept was his, his bass playing, singing and harmonizing are sublime throughout, and with the notable exception of “A Day in the Life,” his songs were the best. Had he not been willing to take the lead at this critical juncture in the band’s history, not only might this album never have materialized, there’s a good chance the Beatles might have simply packed it in.

The new release is also an occasion to think about extra-musical issues surrounding the record. In my estimation, it is the first postmodern album, since it toys with the very idea of identity. In the album’s guiding conceit, the Beatles eschewed their superstar status, or real personalities, and pretended to be some ragtag collective helming a psychedelic variety show. Also, the fragmented lyrics, belief in the artistic potential of the random and accidental, and pastiches of varying kinds — all increasing in the Beatles’ music since at least “Rubber Soul” in 1965 — fit the postmodern profile. Likewise, the LSD-fueled "A Day in the Life," like much of the album and some tracks on “Revolver,” presented reality as more of an idea than a tangible entity.

The music is only part of the reason that “Sgt. Pepper’s Lonely Hearts Club Band” has stood the test of time. Its release marked the last gasp of the utopian vision that so many hoped the decade would fulfill. “Sgt. Pepper” arrived before things went downhill with the assassinations the following year of Robert Kennedy and Martin Luther King Jr., the muddy mess of Woodstock, the turning of “fun” drugs into dangerous ones, death at Altamont, the Manson murders, the Tet Offensive, the Chicago Democratic Convention and the doomed May '68 uprising in Paris.

That’s not to say the album is not without its tinge of darkness, from the apocalyptic tones of “A Day in the Life,” to the disconsolate runaway of “She’s Leaving Home,” to the existential ponderings of “Within You Without You.” Like the metaphorical house in “Fixing a Hole,” something is perceptibly wrong in the world, even if the deluge has yet to arrive. Still, the overall feeling of the music and lyrics on “Sgt. Pepper” more closely resembles a joyous and worry-free acid trip.

Finally, the larger questions remain: How well has “Sgt. Pepper” aged, and is buying a 50th-anniversary edition simply giving into nostalgia? Listening again to the album with its new makeover made me realize that the album transcends time. The whirling, backward organ riffs, sound effects and LSD-inspired lyrics scream “1967!” However, the melodies, performances and arrangements have an appeal that never grows old. Like so many Beatles songs, the tracks on “Sgt. Pepper” have become part of the fabric of our culture.

As for nostalgia, marketing terms like “remastered” and “expanded edition” allow us to feel better about shelling out money one more time. But do it because the record at last sounds like it always should have. Detached from the time capsule that was the late 1960s, the album is not an artifact, but a living, breathing work of rock ’n’ roll that deserves its place in the canon.

John J. Winters Cognoscenti contributorJohn J. Winters teaches at universities in Massachusetts and Rhode Island, and is the author of "Sam Shepard: A Life."