For the second year in a row my favorite movie at the Sundance Film Festival was a Casey Affleck vehicle about mourning and incalculable loss. But star and subject matter aside, "A Ghost Story" -- the remarkable new film from writer-director David Lowery that's opening at the Coolidge Corner and Kendall Square theaters this weekend — could not be more different in style and tone than the aching, kitchen-sink realism of "Manchester by the Sea."

It's a tale told through images and edits instead of words, this is something far dreamier and more adventurous than you might be used to seeing at the movies. “A Ghost Story” is an all too rare find these days: a genuinely original picture.

Affleck and Rooney Mara star as a young married couple inhabiting a charmingly ramshackle ranch house in the Texas flatlands. We see brief, elliptical glimpses of their tender relationship, cruelly snatched away before the 10-minute mark when he’s killed in an offscreen car accident. She identifies his body at the morgue and the coroner pulls a sheet over his head. A few moments later he sits up and follows her home, still wearing the sheet.

Rather than employing some state-of-the-art special effect to convey Affleck’s paranormal presence, Lowery’s use of what’s basically a child’s Halloween costume is an artistic gamble both brilliant in its simplicity and amusingly absurd. The droopy, black eye-holes impart an oddly comic melancholy that put me in mind of a “Peanuts” cartoon, as did the heaviness of the star’s trademark slouch. I’m fairly certain this is the first time a performer has followed up an Oscar win by remaining silent under a bedsheet, with Affleck’s work here more akin to that of a puppeteer, expressing a wide range of emotions almost solely through his shoulder and neck movements.

If this setup reminds you of another “Ghost” story starring Patrick Swayze and Demi Moore, rest assured there’s no medium played by Whoopi Goldberg arriving to intervene and no pottery was harmed during the making of this picture. Instead he just hangs around the house while she grieves — a looming, faintly ridiculous spectral figure watching as life begins to go on without him. Lowery, who also edited the film, distorts our sense of screen time to put us in Affleck’s otherworldly headspace. An epic, minutes-long unbroken wide shot of a post-funeral Mara stress-eating an entire chocolate pie is soon followed by a rapid-fire montage of her leaving the house to go to work, over and over again.

There’s an uneasy feeling of time slipping away, of precious moments forgotten and a world moving on while our solitary figure still lurks, lonely in the corner. She sells the house and moves out, new tenants come and go, and as years rush by the ambitions of “A Ghost Story” grow increasingly more cosmic and grand. This little low-budget film begins to contain multitudes, with the white sheet of Affleck’s costume becoming a blank slate upon which we are free to project our own yearnings and anxieties.

Writer-director Lowery previously teamed with Affleck and Mara for 2013’s “Ain’t Them Bodies Saints,” a moody, '70s-set crime picture that owed so much to Terrence Malick’s “Days of Heaven” and Robert Altman’s “Thieves Like Us” that it came off as movie karaoke without an identity of its own. He fared far better with last summer’s “Pete’s Dragon,” an unexpectedly delightful re-working of the elephantine 1977 Disney musical that showcased a touching modesty and gentleness of spirit I’d thought to be extinct in this era of bludgeoning family entertainments.

“A Ghost Story” was shot on the fly with a cast and crew of friends near Lowery’s home in Dallas last year as something of a lo-fi, throat-clearing exercise after the stress of spending two years helming a gigantic effects-heavy blockbuster. It’s got the hushed, intimate ambiance of a personal project, something dear and heartfelt to all involved. Cinematographer Andrew Doz Palermo uses the boxy 1.33:1 aspect ratio, so images sit in the middle of the screen with rounded curves at the edges of the frame, walled in by blackness on either side. Watching it feels like peering through a keyhole.

There’s almost no dialogue in “A Ghost Story,” save for a massive, mid-movie ramble by alt-country singer-songwriter Will Oldham, playing a drunken house party guest. The soused philosopher carries on somewhat obnoxiously about an artist’s motivation to create something permanent that persists through the ages. Meanwhile Affleck’s apparition — already experiencing firsthand just how tiny and temporary everything is within the vast expanse of time — stares him down with a look that’s about as incredulous as a man wearing a sheet over his face can probably muster.

But Lowery has tellingly tipped his hand by scoring the scene with Beethoven’s “Ode to Joy,” suggesting there are indeed some beautiful things in the world that do survive over the years. This movie might be one of them. 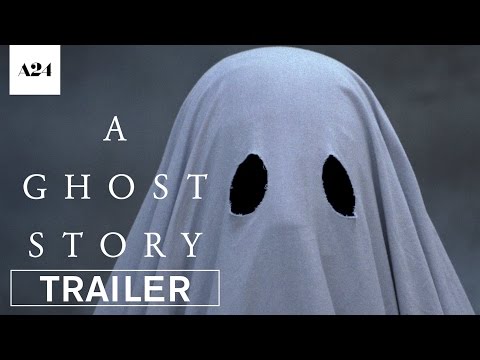