I’ve spent a lot of time in recent months reporting on Lyme and other tick-borne diseases, talking with experts and public health professionals, and listening to more lectures about ticks than anyone who isn’t an entomologist should.

I thought I had learned a lot about Lyme and tick-borne diseases in medical school, but we really only scratched the surface. So here are seven big things I learned while reporting:

Permethrin kills ticks. I’ve seen it firsthand. I didn’t use it before reporting on Lyme. I would hike in the woods in long pants and do tick checks afterwards. I have since seen countless demonstrations of ticks quickly becoming debilitated and dying after walking over permethrin-treated clothing. Now, I’m a believer.

Tick experts tell you that you can spray your clothes, and the permethrin will last for five washes (learn how by watching this video). But you can also buy clothing with permethrin embedded in it that will last for 70 washes. I bit the bullet and bought the latter because I can't remember to spray my clothes once a month. In a month and a half of hiking, I have yet to find a tick on me.

2. Ticks Are Out There All Year

While the greatest risk is in spring and early summer, then again in early fall, I thought that winter killed ticks, or at the very least there weren’t many infections during those months. But entomologists and public health officials say that while there are fewer cases in winter, bites and infections can happen any time of year.

And just like Lyme cases overall, the number of cases Massachusetts sees over the winter is rising. 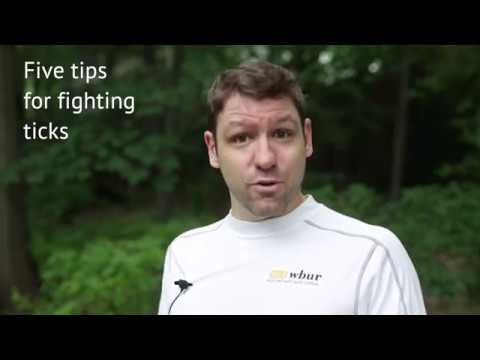 3. It Takes A Village

Tick scientists disagree on a number of things -- like whether mice or deer are ticks’ most important hosts -- but they all agree on one thing: There is no magic bullet that will curtail Lyme.

That’s why Catherine Brown, the state public health veterinarian, told me “it takes a village.” Scientists’ biggest hope is that groups of people will come together to get involved and commit to doing something. That could be a homeowners association, neighborhood, or town or county government.

Deer, mice and ticks don’t respect property lines or town boundaries. If we treat this problem like they do respect those boundaries, it is bound to get worse.

4. And It Takes Money For Prevention

Lyme can be a debilitating illness. But most scientists and health officials I spoke to said there's not enough money for Lyme because there's not enough money for other, higher priorities. If we under-fund our public health system, then we end up unable to properly address public health issues until they get out of hand and become emergencies. See: HIV, opiate crisis.

5. Lyme Disease Testing Is Better Than You Think

Lyme testing is confusing. Early in the infection, when the main symptom is often the telltale bull's-eye rash, testing is not helpful. Use a test for early Lyme to try to diagnose late-stage Lyme, and the results are likely to be confusing and possibly to have false positives, says Paul Aucott, a Lyme disease expert at Johns Hopkins in Baltimore.

Lyme tests are far from perfect. But I met a lot of people saying Lyme tests are horrible, so we can’t trust them at all. But if the right test is used at the right time, Lyme tests are about as good as many of the other blood tests we use for diagnosing various diseases. In certain situations, like Lyme arthritis, they are excellent -- like more than 95 percent accurate. So we should be concerned not about the test, but about making sure the person ordering it orders the right one at the right time.

6. Be Careful What You Read

I have read too much about Lyme and other tick-borne diseases -- scientific papers, conference proceedings, local newspaper articles, blog posts and Facebook groups. There is a lot of misinformation and misunderstanding out there.

According to one scientific paper, many websites touting alternative therapies have a scientific sheen. They use medical language or have people with MDs saying a treatment works great. But these websites rarely talk about who should not have the treatment, or possible side effects from it. It is worth being suspicious any time someone is trying to sell a cure-all for everyone that they claim has no side effects.

7. Doctors -- And Medicine In General -- Can And Should Do Better

When I visited the Dean Center for Tick Borne Illness in Boston's Charlestown, I was shocked to learn that the first appointment between patient and doctor lasts 90 minutes. My first thought was: No wonder patients with chronic symptoms of Lyme often say their doctors didn’t listen to them. If my colleagues -- each one of them kind and caring people -- had 90 minutes per new patient, I’m sure their patients would feel just as heard.

But in primary care, appointments are often crunched into 15- or 20-minute chunks. For someone struggling for a decade with a chronic illness, it would take months of 20-minute appointments to get the whole story. Who has that kind of time?

Hearing about the 90-minute appointments reminded me of a paper I read recently, about how our medical system fails people with “medically unexplained symptoms,” estimated to be 15 to 30 percent of all patients a doctor sees. In these situations, “physicians avoid emotional distress, lack strategies to engage with patients’ psychosocial problems, and attempt to maintain authority in the face of ambiguous conditions.” A lack of time makes this worse, as rushed physicians don’t have the time or mental space to be empathetic.

A system like this fails both physicians and patients. As another paper noted, “the brevity and narrow focus of the typical clinical encounter in primary care or specialty medicine does not allow most patients enough time to construct a meaningful narrative about their symptoms.”

As a result, patients are often dissatisfied — not just with their doctor, but with a medical system that not only can’t explain their symptoms, but often does not take those symptoms seriously. As a doctor, I’m frustrated too. I’d like to have more time with my patients. If I had a chronic illness, I’d talk to my doctor about finding ways that I could get more time with them to tell them the whole story.