For these pups, it's been a long journey to find a home — from an island devastated by a hurricane, to a New England farm — and they aren't home just yet.

But you could soon change that. Officials at Boston-based MSPCA-Angell announced in a statement Tuesday evening that they will soon be looking for human companions to adopt eight dogs it has rescued from Puerto Rico in the wake of Hurricane Maria.

The dogs — three adults and a remaining brood of five puppies each between 8 and 9 weeks old — are taking up temporary lodging at the MSPCA-Nevins farm in Methuen. The nonprofit says the dogs are mixed-breed canines, more commonly referred to as "satos," and were surviving without homes in Puerto Rico before the storm hit three weeks ago.

Below you can see the five little pups playfully pounce upon one another while keeping warm on a blanket. (Which one is the cutest? It's clearly the tiny brown pup ignoring all the commotion and just calmly chewing on the red velvet cake-colored blanket.) The MSPCA added that it will post adoption updates regarding the pups on YouTube, too. 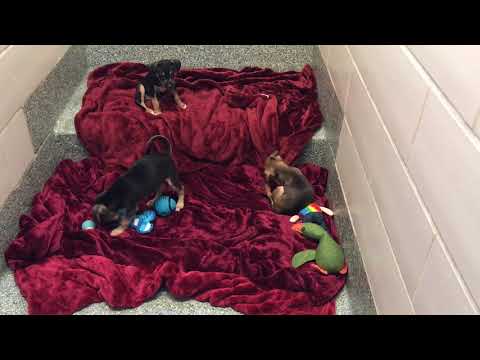 The dogs were first taken to an animal adoption center in Madison, New Jersey, where they were picked up and driven to Methuen Monday night. For now, the little furballs are being quarantined as they undergo medical evaluations, and they'll be spayed and neutered before they can be taken home, MSPCA officials said.

"We’ll do our best to ensure all of these dogs are placed in wonderful homes," Mike Keiley, director of adoption centers and programs at MSPCA-Angell, said in the statement. "Now more than ever the international animal welfare organization needs to come together to ensure we can protect the most vulnerable animals among us, and I’m so proud that we’re doing that.”

The MSPCA also said it anticipates there will likely be more pets from Puerto Rico in need of new homes. The organization said in its statement that, "given Puerto Rico’s devastation — with communications and electricity knocked out for the majority of residents — shelter officials were desperate to re-home the animals given the expected surge in animal surrenders still to come."

Last week, MSPCA-Angell began seeking homes for some of the 34 cats it rescued from St. John in the Virgin Islands, which was also ravaged by a hurricane — this time, Irma — within the last five weeks. So far, the MSPCA says its kitty adoption efforts have been largely successful.