Editor's Note: This story contains details that may be upsetting to some readers.

In 1999, when she was a graduate student, Jane Willenbring says she made a promise to herself: One day, she would report what she calls the horrific treatment she received during scientific field work in Antarctica.

"It was possibly the worst ... the worst experience of my life," Willenbring says.

That long-ago promise to someday tell the story helped get her through the abuse she says she experienced. Last year, feeling secure in a new tenured position, Willenbring sent a letter to Boston University describing what she says happened during her first Antarctic summer with her supervisor, David Marchant.

He was then an assistant professor in earth sciences at BU, widely recognized already for outstanding research on the East Antarctic Ice Sheet. His research changed the way people understand the stability of that ice sheet. He has a glacier named after him.

But Willenbring says he revealed another side on that trip.

"It was all sort of remarks about how bad I was, what a slut I was, how stupid I was, how I didn't belong in science," she says. "There were constant comments about my body, and it also got quite physical. He would push me down and sort of attempt to dominate me, sometimes even sitting on top of me and spitting on me."

One week, Willenbring says, Marchant threw rocks at her every time she urinated in the field.

And a year before that trip, Chicago-area high school science teacher Hillary Tulley reports a similar experience with Marchant in Antarctica. Tulley traveled through a National Science Foundation program that sends teachers to Antarctica.

"As soon as we got off the helicopter in Beacon Valley," Tulley says, "he grabbed me by my arms and shoulders and wheeled me around and almost threw me to the ground, and called me the c-word and an idiot b----, and said, 'We don't have time for sightseeing. We have to set up camp.' And I don't think I had taken two steps yet."

Later, during meals, Tulley says Marchant made regular comments about her breasts.

Another graduate student was present during both Willenbring's and Tulley's expeditions to Antarctica with Marchant. The student, Adam Lewis, told WBUR he witnessed Marchant being cruel to Willenbring and using coarse sexual language. And he says Marchant made grotesque sexual comments about Tulley's body when she was not around.

Tulley and Lewis have both written letters that are included in the Title IX sexual harassment complaint Willenbring has brought against Marchant at BU. Another former BU graduate student has also filed a separate Title IX complaint.

And on Thursday, the U.S. House Science Committee announced it has opened an investigation into the allegations of sexual harassment against Marchant. The committee wrote to BU seeking documents related to the assault investigation, as well as to the more than $5 million in federal grant research he received.

"He would push me down and sort of attempt to dominate me, sometimes even sitting on top of me and spitting on me."

Marchant did not agree to an interview, but emailed a brief statement citing the Boston University investigation.

"I do not wish to compromise the integrity of that investigation by making any comments before the investigation has been completed," the email says, in part.

Marchant is on leave from his position as chairman of the Earth & Environment Department.

In Tulley's view, the harassment she says she experienced has an impact on the entire scientific community.

"Dave Marchant stole from science because he pushed people out," she says, "and he derailed careers, which means that some important science probably never will get done and some perspectives are never going to be listened to because people left the field."

Kathryn Clancy agrees. "Certainly, women ... are really pushed out because of the ways that they're consistently discriminated against, that there are consistent implicit biases that are making them feel unwelcome."

Clancy is the author of a 2014 study that found 70 percent of women field scientists reported having been sexually harassed, primarily by their superiors. The survey found that the harassment was overwhelmingly aimed at trainees.

Clancy concludes from her continuing research that sexual harassment, more than any other barrier, is driving women from science.

"What we found was that people who had abusive or harassing experiences in the field were much more likely to make lateral career moves," she says. "So, say they were working at one field site, they're going to move to a different field site, or take a step down. Like say they have a job with some esteem. They're going to take a job at a lesser institution to get away from a harasser ... and a number of people left science altogether."

There is a David Marchant lab at BU. Among other discoveries, it contains what the team believes is the oldest ice in the world. Air bubbles in it can reveal what the atmosphere was like millions of years ago.

Here is Marchant himself in a video on his website: 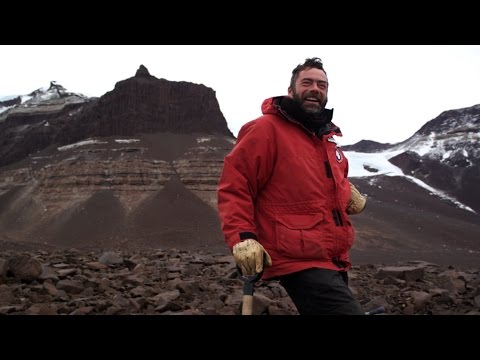 It's in the Marchant lab that post-doctoral researcher Sean Mackay meets me. He's been to Antarctica with Marchant five times in recent years. He says Marchant expects a lot of everyone who goes with him to Antarctica, but he's never seen Marchant treat women differently from men.

"Absolutely not," Mackay says. "I've noticed him in the field being demanding and being exacting and expecting quality work. I have not in the least noticed him treat men and women differently."

Mackay says on these expeditions, people are tired and hungry and cold and uncomfortable and isolated.

Mackay says the removal of Marchant from Antarctic research will be a significant blow to the pace of scientific discovery in Antarctica.

Jennifer Berglund, a BU program administrator who has traveled to Antarctica with Marchant, speaks highly of working with him.

“I have worked closely with Dave Marchant for the past five years, both in the field and at Boston University, and my experiences have always been extremely positive," Berglund says in a statement. "During that time, he has always been supportive of me and my career, and that of the other women and men I have observed working with him.”

In La Jolla, California, at the Scripps Institution of Oceanography at the University of California San Diego, Willenbring is now an associate professor.

When she got back to Boston University from Antarctica, Willenbring says she did not report the abuse she says she suffered. She says she feared retaliation. That, she says, prompted her to wait all these years until she received tenure. But job security was just one factor in her decision to come forward.

"And then two other things happened," Willenbring says. "I also had graduate students who are women of my own, one of whom went to Antarctica, and I also had a daughter who told me that she wanted to become a scientist."

A year after Willenbring filed her complaint, Boston University is still investigating.

It explains the delay in a statement that says, in part: "[T]he accusations involve harassment that is alleged to have occurred as long as 18 years ago in Antarctica, and it is taking time to reconstruct circumstances, identify witnesses, and verify facts."