The masterpiece, written in 1741, remains one of the most notoriously daunting pieces in the classical music repertoire. Moreover, the celebrated ballet master and choreographer Jerome Robbins had already created a work to the variations, which was performed by the New York City Ballet in 1971.

So when classical pianist Simone Dinnerstein approached Tanowitz about the collaboration, the contemporary choreographer was hesitant to take on such an iconic score, and a classical one at that. After mulling it over, however, she allowed her intimidation to become her motivation.

Last October, “New Work for Goldberg Variations” — featuring seven members of Pam Tanowitz Dance — made its debut at Duke Performances, the professional performing arts organization at Duke University in North Carolina. The team has since taken the piece on tour, and this weekend, the evening-length work will premiere at the Institute of Contemporary Art.

“It’s a piece of music that is a real journey through every type of color and subtlety of character,” said Dinnerstein, whose interpretation of the score brought her international acclaim following the release of her recording in 2007.

Over the years, she has played the variations easily a few hundred times, even accompanying the Paris Opera Ballet in 2016 from a half-raised orchestra pit so as to be visible without obstructing the stage. Yet unlike working within the confines of Robbins’ already set choreography, Dinnerstein was instrumental in the way that Tanowitz brought the piece to life. She was involved in the creative process from the beginning and often provided input about the music’s complex rhythm, phrasing and character in order to assist her counterpart in developing the movement.

Bach’s compositional intricacies and the sheer speed of many of the variations, Dinnerstein explained, are not only mentally challenging but also physically demanding for a pianist. “It’s very acrobatic,” she said. “There’s no way you can play this piece on autopilot. You really have to be present in every moment.”

Still, Dinnerstein, who is placed center stage, manages to interact with the dancers as they literally surround her with their movements. Everything in the piece emanates from the music, Tanowitz said, so it only made sense for the piano to double as the set.

Being in such close proximity to the dancers, Dinnerstein presumed that she would react visually to them. What she wasn’t expecting was a more intimate, indirect connection with them. “I play a lot of the time with my eyes closed, and I can feel them nearby,” she said. “I can hear them breathing.” Her bare feet sense their steps through the floor; a breeze whooshes across her face as they run past her. “Sometimes, when they are jumping, the piano bounces,” she added, laughing.

This level of awareness and activity around her presents an additional challenge in performing the piece, she explained. “I can't be distracted by what they are doing,” she said, “but I also want to be responsive to what they are doing while manipulating this very complex piece of music on the piano.”

The collaborative experience brought about new revelations for both women and perhaps a greater understanding of each other’s art form. In the beginning, Tanowitz — who typically choreographs to more aggressive, dissonant music by living contemporary composers — sat next to Dinnerstein at the piano as she explained, variation by variation, the inner workings of her interpretation.

Although the music is of a different temperament, Tanowitz retained the style of movement that she is known for — an abstract, postmodern treatment of classical dance.

“I still felt like it was really important for me to keep my identity and my personality,” she said. “I think, in a weird way, I’m even more myself because when there’s a more traditional framework to sort of bump up against, there becomes more freedom, not less.” 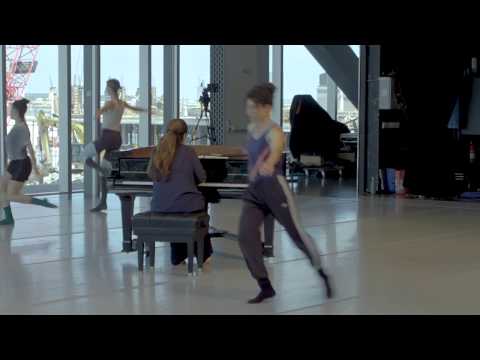 “New Work for Goldberg Variations” runs Dec. 8-10 in the Barbara Lee Family Foundation Theater at the Institute of Contemporary Art.