This is a story about an often controversial, emotional part of our food system that can be hard to talk about: how livestock is processed into a meat.

For years Massachusetts has only had two USDA-inspected slaughterhouses to serve a growing number of livestock producers.

Now a third is opening in Westport. A consortium of farmers and local food advocates have banded together to build a new, state-of-the-art processing plant they believe will be a better slaughterhouse.

Elizabeth Frary is fully on-board with the concept and has been attending community meetings to follow its progress closely. For the past seven years, she and her husband have been running a pasture-raised livestock farm in Dartmouth. She took me on a tour of their grassy 65-acre site and introduced me to some of her animals.

“Hi pig, pigs!” Frary, a fourth-generation farmer, belted out excitedly. The swine looked over from a spot in the shade as we approached, then bolted into the row of distant trees lining their pasture.

“So these are the big guys,” Frary explained, “The farm joke is this is ‘pig paradise,’ because their fence goes all the way back into that woods right there, and these guys are like wild hogs.”

Between 60 to 70 crossbred pigs will spend their days wallowing, running and freely foraging for grass and insects on Copicut Farms. That is, until it's time for the Frarys to take them to be slaughtered and butchered.

“Clearly slaughtering is not anyone's favorite part of the job,” Frary shared, “but it's something that we try to be very cautious, careful and educated about.”

Frary says the way her animals are handled before and during this process also matters to her customers. She sells directly to them through the farm and at a few different farmer’s markets. While Frary says she’s been satisfied with their experiences and service at Adams Farm, a family owned slaughterhouse in Athol, it's a two-hour trip to get there — which is not ideal for her pigs.

“Transporting is always something that can cause quite a bit of stress on animals,” the 36-year-old said. “So the idea of having a USDA slaughtering facility that is keeping humane standards in mind, that's huge for the South Coast.”

Frary calls the nearby, soon-to-open slaughterhouse a game changer for a number of reasons, including that she and her husband will now be able to offer fresh pork products — rather than frozen — along with their newer addition of lamb.

“Clearly slaughtering is not anyone's favorite part of the job, but it's something that we try to be very cautious, careful and educated about.”

The drive from Copicut Farms to Westport only takes about 20 minutes. On a visit to the new slaughterhouse, commercial beef farmer Andy Burnes described his group's new paradigm.

“What we're looking to do is to produce something, or create something, as an alternative to the industrialized meat system,” he said.

Burnes is also president of the Livestock Institute of Southern New England, the nonprofit behind the processing plant and retail shop known as Meatworks. It will be the only nonprofit slaughterhouse in Massachusetts.

Burnes recalled how more than seven years ago he and a group of fellow livestock farmers and food advocates started dreaming of a way to build what they say is a better slaughterhouse. The need became apparent when a custom, non-USDA facility in Dartmouth closed after the gentleman who ran it had a heart attack.

“I could practically walk my sheep up to it,” Livestock Institute board member and former farmer David Brownell said. “It was beautifully run, very humane.”

They wanted to find a solution for small, commercial producers and "backyard farmers." Now Brownell and Burnes are proud to take visitors on a tour through their clean, brightly lit industrial space. It’s nearing completion, but isn’t quite there yet.

We walked past the office where an onsite USDA inspector will work, as well as the room where employees will wash thoroughly and dip their feet in sanitizer when they arrive and after they leave.

Burnes described how farmers will drive their cattle, pigs, sheep and goats up to a barn behind the 11,000-square-foot facility. The animals will be given water while waiting in pens, and ultimately will be guided into the facility through a system of chutes.

"One for the small animals, and one for the big animals that go into what's called the ‘knock box,’ which is where the animals are stunned,” Burnes said.

Demand for this operation, Burnes said, is being fueled by the rise of the local food movement.

“We’ve had tremendous support," he said. "Most people felt we would never find a town that would want this, but Westport — which has a long agricultural history — has been amazing.”

After years of fundraising, Burnes and the team garnered more than $7 million in support from sources, including the USDA, the Massachusetts Department of Agriculture, MassDevelopment, bank loans and private donors.

The group designed their new slaughterhouse model to "up the bar" with stringent slaughterhouse food safety standards, advanced weighing, monitoring and tracking systems, and the goal of maintaining transparent relationships with farmers.

Another unique part of the Livestock Institute/Meatworks plan includes educational programming. Executive Director Gena Mavuli is in charge of developing conferences, seminars and apprenticeships for the industry and community, including agricultural schools. She said one goal is to help address a national shortage of butchers on a local level.

“There's a lack of knowledge on meat cutting and meat quality on the farmer end,” she said, “and on the consumer end, you know, really educating consumers on the difference between a local grass-fed animal and what you see in the supermarket.”

Mavuli and I met at the Roslindale Farmer's Market on a recent Saturday where she said this new slaughterhouse concept is on the cutting edge of the region’s food system. For her, the operation is bringing back something that's been lost over generations.

“There used to be a network of slaughterhouses dotting the country,” she said, “and that has been consolidated over the last 50-plus years into major packers — primarily located out west. And the East Coast is left with very limited resources for small producers.”

The slaughterhouse is being billed as an "animal-welfare focused slaughter and processing facility." COO Amado Baeza has seen the gamut over his 30 years in the business working at big, small, new and old U.S. businesses across the meatpacking industry. Here he’s been orchestrating everything from hiring, to the tracking systems, to the installation of equipment he said is common in larger plants.

"We have solid-sided chutes wherever the animals are going to be moved,” Baeza said, “so they don't have any distraction and they move easily without stress.”

Those solid-sided chutes lead onto the "kill floor" — as it's known — and they’re one of the design elements recommended by a leader who's helped transform animal-handling systems around the country. Temple Grandin, professor of animal science at Colorado State University, has been described as something of an animal-whisperer. She’s dedicated her career to understanding their behavior. 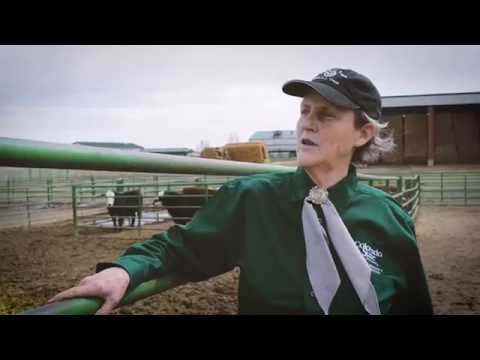 Grandin has increasingly been working with both small- and massive-scale producers nationwide to create systems intended to decrease livestock suffering in compliance with the U.S. Humane Slaughter Act. Grandin says when designing a slaughterhouse certain things are a must.

“You have to have non-slip flooring — that is absolutely essential. Because if you have an animal in the stun box and the floor is slippery, he’ll be sliding around and getting all agitated,” she said. “You also have to have management that cares.”

Grandin’s video tours of large-scale slaughterhouses are used across the country and world to train employees about animal handling. She said it’s a matter of humanity, but also one of quality control.

“They just walk in, shut the door, bang, it's done,” Grandin said. “Things are done right, that's the way it works.”

For Grandin, this is a practical solution. For others, it's an oxymoron.

“I would never support a slaughterhouse as being humane,” said Dominique Ruszala, who leads Boston Animal Save, an animal rights group that’s been protesting at the Livestock Institute's creation.

Ruszala said she plans to be there when the first animals arrive in Westport so she can bear witness to their suffering. Some locals in the Westport area have also expressed disgust over the Livestock Institute’s construction.

“It's something I struggle with,” she said. “It's really hard to communicate — certainly to folks that are really strongly averse to meat and the slaughtering of animals — why I'm OK with raising these animals and having them processed.”

Walking through the rocky, scraggly field where her pigs grow up Frary shared her philosophy that it's a farmer's responsibility to give livestock the best life possible — right up until the very end.

“I'm so proud of the lives that our animals have,” she said. “I just think it's so great that we spend so much time caring for these animals on farms like ours.”

And Frary believes, the more we as a society talk about how meat makes it to our plates, the better.