When Spirit Payton started making videos in 2015, she had no idea she was destined to become the online "Queen of ASMR." Now, millions of people have watched her eat pickles.

ASMR, or Autonomous Sensory Meridian Response, is a mysterious sensory phenomenon that involves a localized sensation starting in the back of the scalp and moving down the spine. Payton was introduced to it by her daughter, who wanted to help her mom get some sleep while she was bedridden from a painful and chronic degenerative bone disease.

The ASMR videos, Payton says, made her feel "like I was walking through a beautiful meadow." 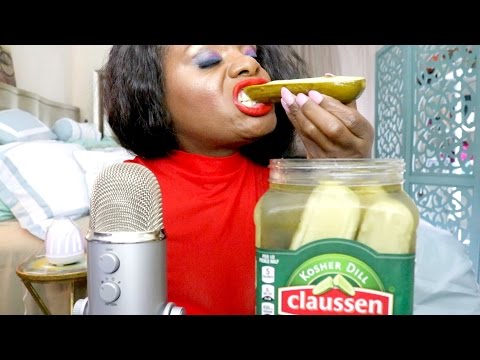 She was soon feeling so much better that she decided to film herself eating some spaghetti, and ASMRTheChew was born. She now has more than 400,000 YouTube subscribers, and her ASMR whispering and eating videos, aimed to help viewers with issues ranging from anxiety to insomnia, have been watched over 85 million times on that platform alone. (She has also gone viral on Instagram).

Payton is part of an ASMR wave that is attracting millions of viewers to videos that are intentionally designed to trigger the tingles. They feature people whispering into microphones, carving or crushing soap, and giving personal makeovers. In less than 10 years since the term was coined, oddly satisfying ASMR content has gone from a fringe concept on message boards to a global internet phenomenon.

And now, researchers are beginning to dig into just what's happening when that mysterious tingly feeling hits.

Research describing ASMR first appeared in academic literature in 2015, and since then a handful of studies have scientifically probed the feeling and its triggers. Until recently, no one had systematically explored how ASMR physically affects the body in real-time.

But last month, researchers at the University of Sheffield in the UK released a study doing just that. And as it turns out, ASMR has measurable physiological effects for those who experience it.

Published in the journal PLOS One, the research looked at feelings in over 1,000 people — 813 of whom self-identified as having ASMR -- after they viewed triggering content. Those with ASMR reported significantly more calmness and excitement, as well as lower levels of stress and sadness than participants who say they don't experience ASMR.

Importantly, the groups did not have different responses to non-ASMR content. The authors write these findings "provide empirical support for anecdotal claims" that ASMR promotes positive feelings in those who experience it.

However, the truly novel findings came from a second experiment, when 110 participants viewed ASMR videos while connected to biological feedback machinery. After watching the videos, the heart rates of people with ASMR slowed on average by more than three beats per minute. And their skin conductance levels—a measure of physiological arousal – were significantly increased compared to those in the non-ASMR group.

The increase in skin conductance “went against our initial predictions,” says Dr. Giulia Poerio, a research associate at the University of Sheffield and lead author of the paper. She says the seemingly contradictory combination of heart rate drop and increased biological excitement “could reflect the emotional complexity of ASMR.” Paradoxical emotional experiences are not unheard of — take nostalgia, the paper notes, which can conjure up feelings of happiness and sadness simultaneously.

Poerio, who says she has experienced ASMR for as long as she can remember, also clarified that the tingles are not a sexual experience.

“Quite often ASMR is mischaracterized as something that’s sexual” by those who don’t experience it, she says.

The study found no indication of sexual arousal from ASMR, but it did find evidence that it increased feelings of social connectedness. The authors suggest this may indicate that ASMR “simulates a form of social grooming,” much like the feelings primates experience when picking bugs off each other.

However, they write that more research is needed to study the potential of ASMR to relieve loneliness.

Overall, the research “suggests there are emotional and physiological benefits” to watching ASMR for those who experience it, says Poerio.  However there is still no hard data on how many people actually experience the sensation. Because previous studies have relied on volunteers rather than representative samples of the general population, she says, the studies can't say how common—or rare—ASMR truly is.

Do you experience ASMR? Here’s how to find out.

Want to see if you’re one of the lucky ones? Below is a ranked list of the most common tingle triggers for participants in Poerio’s study. Linked to each are relevant ASMR videos that could make good starting points. (Full disclosure: I experience ASMR, and these are my picks.)

Make sure to wear headphones while watching, ideally the over-ear kind for full immersion.

Note: Some people seem to have an opposite reaction to ASMR triggers called misophonia, and really dislike the sounds in the videos. While Spirit Payton admits that "ASMR is not for everyone," she says it helps to approach the seemingly strange videos with an open mind. Payton added that ASMR "works in different ways for different people."

If you don't like any of these, there are lots of other options. The top YouTube “ASMRtists,” like ASMR Darling and Gibi ASMR, have over a million subscribers and hundreds of videos each. You can also explore “unintentional ASMR:” content not created with tingles in mind, but that just so happens to promote them. (Painter Bob Ross has a cult ASMR following).