When I first heard about the new public art exhibition “Fog x FLO” my mind leapt to the ambient track, “Little Fluffy Clouds,” by The Orb — then to John Carpenter’s 1980 horror movie — then to this sweet poem by Carl Sandburg:

The fog comes
on little cat feet.
It sits looking
over harbor and city
on silent haunches
and then moves on.

Mysterious, creeping fog has inspired writers and artists for centuries, but Fujiko Nakaya has figured out how to craft sculptures out of it. Starting Saturday, five of her misty works will roll through different locations along Boston’s Emerald Necklace park system. (Here's a map.)

When I met Nakaya at the Arnold Arboretum, one of the stops along the Emerald Necklace, a few days ahead of the opening, she showed me her ethereal crop of clouds.

“I’m making a cumulus cloud here,” Nakaya mused with a laugh. She’s been conjuring amorphous puffs of vapor -- on the ground — since 1969. The spritely, 85-year-old leads me under an evergreen canopy to her patented, elegant sprinkler system.

“I’ve hung some nozzles there between the trees,” Nakaya points out. She partnered with engineer Thomas Mee to design the tiny, stainless steel nozzles that disperse pure droplets of water, 17-microns in size. The nozzles are connected to five, black water lines suspended above our heads. A calibrated, high-pressure pump in a nearby shipping container kicks on and Nakaya’s sculpture hisses to life. Waves of cloud spill out and waft gently across the sun-dappled, pine needle-covered earth.

Nakaya and contemporary art curator Jen Mergel watch closely to see if the fog behaves the way the artist hopes it will.

“As it's rolling down there are points where it does really look like the flow of a waterfall — like Niagara Falls or something — coming down the hill — and then there are times where it kind of curls back on itself and it floats up,” Mergel observes. “I just love that it's alive. It's not one thing.”

And it will never be the same thing twice. The fog sculpture is meant to be a shape-shifting, multi-sensory experience.

“It's pure, potable water,” Mergel explains. “Anybody can walk into it, breathe it, taste it, touch it, smell it — just like natural fog — and it will be ambient temperature.”

When the board members of the Emerald Necklace Conservancy asked Mergel to help mark the organization’s 20th anniversary with a public art exhibition, she immediately thought of the award-winning, Tokyo-based fog sculptor. Nakaya has created more than 80 installations in 16 countries, but never one in Boston. 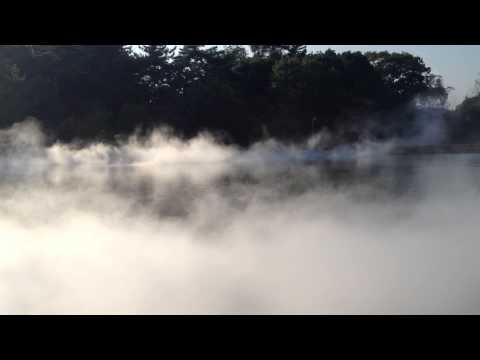 “She’s worked with all sorts of international artists,” Mergel says. “You see these archival photographs of her sitting next to Andy Warhol at a dinner, or working with Merce Cunningham and John Cage and Robert Rauschenberg.”

Even so, Mergel acknowledges plenty of people don’t know this artist’s name.

“She deserves to be known as well as James Turrell or Robert Smithson and these other figures who have been doing art with light and space and nature for decades,” the curator continues. “She has been too — and she's been doing something that has been consistent, it has been timeless, and right now it is timely in terms of climate responsive art.”

Beginning last October, Mergel and Nakaya spent hours wandering along pioneering landscape architect Frederick Law Olmsted’s five-mile chain of waterways and parks. The curator says it was fascinating to watch the artist listen to and feel the environment in ways most of us usually don’t.

“I would see Fujiko stand still for about eight or 12 seconds, and at first I’d think, ‘Is everything OK?' " Mergel recalled. “And then Fujiko would turn to me and say, ‘Does the wind always go in this direction?' "

Unpredictable wind is the biggest challenge Nakaya faces when collaborating with the climate. She’s intimate with the science behind inversion layers, convection patterns and what she sees as nature’s quest for equilibrium.

“It’s autonomous,” Nakaya explains. “In the process I really came to the conclusion that nature really wants to balance out — even the wind.”

“I think of convection and I think of an oven,” the curator joked. “You know, I don't understand that weather cycles are working that way. She will position nozzles in ways where then the mist is feeding itself with the wind to create something more dynamic.”

“There’s a lot of story in this atmosphere,” Nakaya adds with a laugh. “I just give them a chance to express themselves, I just try to choose a place where they can perform best.”

Ultimately the artist and curator identified five responsive spots along the Emerald Necklace: the Fens, Olmsted and Franklin parks, the Arboretum and Jamaica Pond. They also needed to consider logistical factors including water and electricity sources. Arborists and other experts from the city's parks department helped make the exhibition a reality.

Nakaya’s affinity for nature and science is in her blood. Her father Ukichiro Nakaya was a well-known physicist and glaciology expert who invented the first artificial snowflakes.

She began her career as a painter, studying in Japan, the U.S. and Europe before returning to her homeland in 1960. She eventually joined a collective called E.A.T. — short for Experiments in Art and Technology — and moved from painting clouds to making them. Nakaya says, in part, she was confronting the idea that sculptures are predominantly permanent forms — made of stone — like statues from ancient Greece and Italy.

“It's the Western concept of solid and eternal,” the artist says, “but in the Buddhist thinking it's always that nature responds to you according to its rules.”

And she adds, nature always wins.

Standing in the Arboretum, Emerald Necklace Conservancy president Karen Mauney-Brodek says she thinks Nakaya is the ideal artist to speak to what Olmsted designed in the 1800s.

“The Emerald Necklace is a beautiful, naturalistic series of parks in Boston and Brookline that a lot of people think are natural and may not know the history of how they were constructed and deliberately engineered and crafted,” Mauney-Brodek says, “much like Fujiko’s work.”

“When she talks about using fog to reveal — and conceal — it's a lot of the same language and thinking that Fredrick Law Olmsted was using when he sculpted this park system with water,” Mauney-Brodek told me. She hopes this exhibition will entice visitors to explore and maybe even re-discover the urban park system while having their eyes opened to Olmsted's achievements, which included finding an aesthetic solution to a sewage problem in the Fens.

When asked about her thoughts on the Arboretum and Olmsted, Nakaya responds: “He knew how to read the landscape and what the landscape wants. He really articulated what nature does. He observed all the glacial features, and where he didn't want to touch wilderness he left as wilderness. It’s a very beautiful park.”

Nakaya’s newly commissioned fog sculptures will materialize every hour on the hour, from dawn to dusk. She hopes bringing clouds down from the sky will get visitors thinking about extreme weather patterns and our relationship to the changing climate.

“Every day is a record-making weather report,” she says. “That's crazy. We are affecting the weather.”

But the artist also hopes her fog triggers memories. She says her installations have a way of doing that for people who encounter them.

“They start imagining — they have to access their own experience from childhood because they don't know what this is,” she’s says. “And I like people doing that — children, adult — adults especially.”

Then — as if on cue — Fujiko Nakaya’s Arboretum cloud suddenly shifts direction. It covers us with delightfully cool droplets of water on a steamy afternoon. Then the mist reveals a surprise: a tiny rainbow. Curator Jen Mergel laughs and does her best to try to catch it.

Fujiko Nakaya’s exhibition “Fog x FLO” opens Saturday, Aug. 11 along the Emerald Necklace and runs through Oct. 31. Here's where you could find each of the five installations.