I'm in East Boston on a recent Saturday, watching Veronica Robles rehearse with her new mariachi group. We're at the Veronica Robles Cultural Center, which is tucked away in a vast office complex not far from Logan Airport. There are eight musicians — all women — and a whole lot of instruments: two trumpets, a violin and a guitar, plus the little, six-stringed vihuela and the big-bellied guitarron. The group is practicing an up-tempo number with an intricate trumpet line and a cheery, call-and-response chorus. Robles stands relaxed, with her hands in her pockets, as she sings.

The band pauses to review a tricky passage. Vihuela player Alejandra Carballido taps out the rhythm with her hands. Then the band strikes up again.

Mariachi may be the national music of Mexico, but it’s a common sight in the States, too. Like so many music scenes, the mariachi world is dominated by men. All-women mariachi bands have emerged as a kind of antidote, and can be found in cities like Los Angeles and New York. Robles says it’s time Boston had one, too.

This year, Robles won a grant from the Boston Foundation to jump-start an all-women mariachi project. Over the summer she brought a group of Mexican mariachi musicians to Boston to help train up the new recruits. Now, the local group is flying solo. 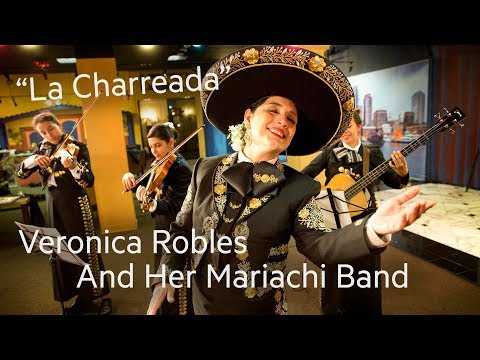 Fronting an all-women mariachi has been Robles' dream for many years — ever since a client canceled a gig when he found out she would be leading the band.

“You know, it's not something that I should lose a gig [over],” Robles says. “And I said, ‘And you know what, I’m going to make my mariachi of women, just to make a statement.' ”

Originally from Mexico City, Robles has been singing in majority-male mariachi groups since she was a teenager. But her musicianship is matrilineal, passed down from her grandmother, who worked as a florist and would sing with Robles as they arranged flowers together.

In high school, Robles performed in Mexico City’s Plaza Garibaldi, a hub for mariachi groups, which rule the public square in their fitted jackets and shiny embroidery. Robles says it was unusual for women to wear the trademark mariachi suits — not that it stopped her.

“I always use my mariachi outfit,” Robles says. “I just love it. When I put on my hat and I cover from bottom to top, I feel powerful. I feel like I have so much to give, and people will accept it that way.”

Robles moved to the United States in the 1990s, eventually settling with her husband in Boston, where she founded the cultural center. She's become something of a local celebrity, even depicted in a mural in East Boston that was commissioned by the city. She says it has always been her mission to elevate mariachi, which isn't always appreciated for its complexity.

“I want people to understand that mariachi music, it’s an art,” she says. “And we play beautiful music — simple songs, but also very elaborated arrangements.”

Many of the group's members are completely new to mariachi. They come from different musical backgrounds, from American jazz to Puerto Rican cuatro music. Some are transplants here, with roots in places like Turkey and Colombia. The project has become an expedition across borders — both musical and cultural.

Nicole Edgecomb, a trumpet player from North Andover who plays in Robles’ group, says that sheet music only gets you so far in a musical tradition that is mostly learned by ear. “It’s not something that can be written on the paper, so much, and translated,” she says. “So I've spent some time listening to ... recordings and videos on YouTube of different mariachi trumpet players.”

Edgecomb started playing trumpet as a kid, and only recently picked the instrument up again. She says that, because there aren’t many women trumpet players, she used to feel self-conscious about performing. “It’s like, sometimes I can’t help but think that people are looking at me in a certain way or having certain expectations about how I’m going to sound or how I’m going to behave or how I’m going to dress, even.”

But these days, she doesn’t worry about that. And playing in the all-women mariachi has been good — a challenge, but the kind that makes you stronger.

“I can’t really pinpoint anything particularly female about it at all, it’s almost as if that also disappears,” Edgecomb says. “You know, when the music starts and we’re all playing the ‘sound’ — that sound is just mariachi.”

A few weeks later, I meet the band again as it gathers to rehearse. Robles has been recruiting, and there are new faces. The women make small talk — about their lives and their jobs, how they found their way here, to an East Boston strip mall on a stormy Monday night, to play music.

After a while, someone strikes up a tune. The rest join in — tentatively at first, and then with the soaring confidence of a real mariachi.

Veronica Robles and her mariachi band will perform on Saturday, Sept. 15 at Danehy Park and on Sunday, Sept. 16 at the Veronica Robles Cultural Center for La Noche Mexicana, a celebration of Mexican Independence.