Charlie Baker and Jay Gonzalez squared off for the third and final time Thursday, and with less than a week to go before election day, Gonzalez has a lot of ground to make up, with polls showing him trailing the incumbent governor by more than 40 points.

Baker and Gonzalez stuck to familiar themes throughout the hour-long debate. Baker heralded accomplishments from his first term, such as investing in offshore wind projects, fixing the Health Connector, and finding housing for 1,500 homeless families who were staying in hotels and motels. 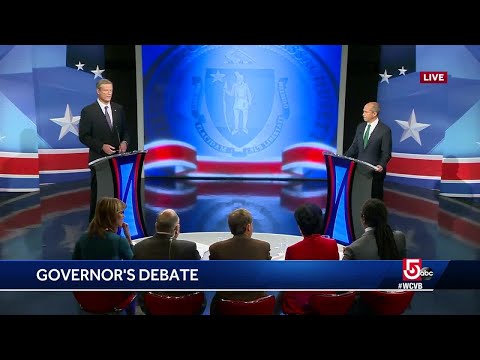 "You are putting loyalty to the Republican Party above your commitment to these values, and I think it matters, which is why I'm running for governor and not some other place, because I think we need a governor who's going to stand up and be consistent on these issues," charged Gonzalez.

"I didn't vote for Donald Trump," countered Baker. "I don't plan to vote for him if he runs for re-election. Most people know where I'm coming from with respect to the president."

Baker also criticized Gonzalez, accusing his opponent of wanting to do too many things without having the money to pay for them.

There was one issue the two candidates agree on: the need to address climate change. Both support some sort of carbon tax. Baker says he wants to see a regional approach, like the state already does in its Regional Greenhouse Gas Initiative.

When it comes to protecting the state from the effects of climate change, Baker says his administration has already started vulnerability planning in every Massachusetts community.

"Once it's done, we'll do hazard mitigation planning for all those communities and then once we have that, that's the blueprint for dealing with climate change here in the commonwealth," said Baker.

"We are setting a national framework that many other states are grabbing onto and pursuing on their own."

"There isn't anyone who follows what's happening on climate change and what we're doing in this state that thinks the governor is being ambitious enough on this. Other states are starting to and will be outpacing us if we stay on his schedule," he said.

In making his closing statement, Gonzalez said he's run into a lot of people who say Baker is doing a good job, but "when I ask them why they think so, the answer is never that he's doing a great job fixing our transportation system or making progress on some other issue that affects peoples lives. It's usually something like, 'he seems nice, and I'm really glad he's not one of those crazy right-wing extremists.' Well, the measure of whether our governor is doing a good job shouldn't be that he's nice and isn't crazy," said Gonzalez.

In his closing bid, Baker said hearing from, and getting to know, the people of Massachusetts has been a joy.

"One of the things we pledged to do when we took office was that we would work together with our colleagues in local government and in state government to move this commonwealth forward. Our economy is booming, our schools are terrific, but the final thing I want to say tonight is that our people are great and I hope you give us a chance to continue the work we're doing on Nov. 6," he said.

Friday is the last day of early voting in the state. On Election Day, Tuesday, Nov. 6, the polls will be open until 8 p.m.