This story is part of The ARTery’s ongoing Sound On series highlighting rising local musicians.

Avi Salloway wants to go for a walk.

The forecast was for rain, but it has turned into one of those flawless fall days, the kind that erases all memory of New England’s perpetual inclemency and replaces it with an almost pathological sense of optimism. It demands to be walked around in.

At the Fresh Pond Reservation in Cambridge, Salloway’s dog, Lujah, strains at her tether as joggers and other leash-led canines trot past. It was Salloway's idea to come here. “It’s a calming place to just reflect and talk and get this autumn light coming through the trees," he says. "It’s nice.”

Salloway is gearing up to promote “Strike the Match,” the second album by his band, Billy Wylder. As we make our way through the woods toward the lake, I remark that the setting feels fitting, given that “Strike the Match” is an environmentalist album. “It’s a love album,” Salloway gently corrects me. “But deeply connected to the earth.”

A love album. That is not the first description I would have applied to “Strike the Match.” Salloway only occasionally makes use of the first-person singular favored by lovelorn singer-songwriters. Instead, he writes of “we” and “you” and “she”: she, the earth; you, the roar of the wild; we who ain’t got time. His lyrics are suffused with natural imagery and a sincere concern for the plight of the environment and the creatures who inhabit it.

Billy Wylder might be best described as roots rock or Americana, but in this sense it, too, defies its label. Yes, the music is guitar-centric and influenced by the blues; yes, it features a fiddle. But Billy Wylder is more sonically adventurous than other bands of its ilk, anchored as it is in groove and texture. Salloway cites as influences his friends in experimental, folk-adjacent acts like The Low Anthem and Cuddle Magic, and the bass-line-forward pop outfit Lake Street Dive. (The group's bassist Bridget Kearney makes an appearance on "Strike the Match.") He builds his songs around mesmeric guitar riffs and swaths them in vapory soundscapes. The lopsided cadences of Tuareg music run through them like an undercurrent, residue from the guitarist’s three years as a sideman for the Nigerien musician Bombino. As a singer, Salloway is no virtuoso, but his voice is warm. His songs are propulsive, hypnotic, enveloping. 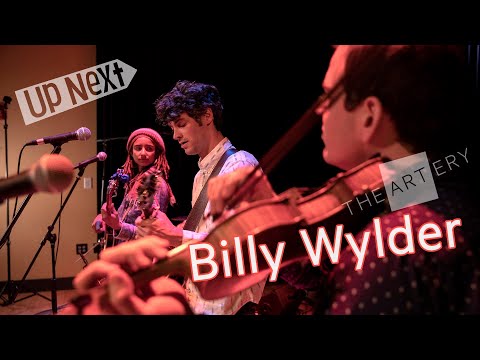 Salloway founded Billy Wylder in 2011. (The name is an homage to his grandmother, Wilma "Billie" Hotaling.) For the most part the group has functioned like a solo project, built in service to Salloway’s vision and bolstered by a rotating cast of supporting players. "Strike the Match" was made in this manner, recorded with more than a dozen musicians at The Low Anthem-affiliated Eyeland Studio in Providence. More recently, Billy Wylder has solidified into a lean four-piece. Drummer Zamar Odongo and bassist Krista Speroni make up a compact rhythm section, while fiddler Rob Flax weaves lyrical counterpoint to Salloway’s guitar. All three appear in various roles on "Strike the Match." Salloway sometimes refers to the band and its sprawling cast of collaborators as a family — the Wylders — which is sweet, but also reminds me of something the leader of a cult would do. (If anyone could convince me to join a cult, it'd be Salloway, who is tall and classically handsome and unwaveringly serene.) "Avi’s so charming," Flax says. "When he asks you to do something, you usually do it."

Salloway, 33, hails from the affluent Providence suburb of Barrington, Rhode Island. He describes a childhood colored by a “free-floating musical vibe” in which instruments were essential on family hiking trips and dad sang Salloway and his sister to sleep at night. At 12, the budding musician started his first band, a jammy rock outfit that became the epicenter of a scrappy basement scene in Barrington. As an undergrad at the University of Vermont he met his longtime collaborator, Celia Woodsmith, a singer of uncommon power and poise. The pair gigged throughout college as the folk-rock duo Avi & Celia, and, after moving to Boston in 2008, helmed the rock band Hey Mama.

From 2013 through 2015, Salloway played in the backup band for Bombino. The popular guitarist from Niger draws his sound from rock ‘n’ roll and the music of the Tuareg, the nomadic Saharan group to which he belongs. Bombino’s influence is a subtle presence throughout “Strike the Match,” detectable in syncopated rhythms and kinetic, looping guitar licks. I ask Salloway if he worries about the optics — not to mention the politics — of a white American borrowing from an African musical vernacular, something musicians have been criticized for in the past.

“To be honest, just playing guitar after three years of touring around the world, I can’t take that out of my fingers and my soul,” he says. “I don’t want to be a Tuareg cover band, and I don’t think by any means our album is like that at all. You know, I want to make sure we're respectful of the tradition, and I'm talking about it here with you because I'm proud to to share that and bring attention to this beautiful art form from a very special community in North Africa.”

Salloway can, however, trace his musical and political lineage directly to another of his heroes, the folk singer and activist Pete Seeger. Growing up, Salloway spent his summers in Vermont at a camp run by members of Seeger’s family. (The camp plays an important role in Salloway’s family lore — he's one of 22 members to have gone there.) Like Seeger, Salloway is deeply committed to lefty causes, and has been known to tote his guitar to protests, from Occupy Wall Street to Standing Rock. He spent several years working for the advocacy group Heartbeat, an organization based in Jerusalem that facilitates music-making among Israeli and Palestinian youth. Salloway, who is Jewish but not particularly religious, describes his time with Heartbeat as one of the most defining experiences of his life, one that solidified his conviction that “music and art [are] a powerful form for cultivating resistance and change.” And yet, when I ask him if he identifies as a protest singer, he demurs.

“I think there's more to creating change than just protesting,” Salloway says. “It takes direct action and it takes strategy. There's so many layers to creating change, and sometimes it's multigenerational. So I think I personally relate to ... seeing art as a form of resistance and a form of mobilization and expanding our consciousness, versus that label of just protest singer.”

Whereas American protest singers like Seeger and Woody Guthrie channeled the confrontational ethos of the labor movement, Salloway’s style is gentler. He doesn’t quite seem like a product of his time, either, devoid as his music is of the era’s ironic remove. The primary emotions on “Strike the Match” are urgency and sorrow. “Mother’s crying,” Salloway croons on “Medicine Mama,” a lament for humanity’s apathy in the face of environmental crisis. “We are barely listening.”

In contrast to the bleakness of his music, Salloway exudes positivity. He's prone to fits of gratitude and expressions of awe. On the inspiration for the album’s opening number, “Great Blue Heron,” which he wrote on a visit to the White River in Vermont, he says: “I started to pick out this melody on the guitar, and all of a sudden this great blue heron showed up and spread her wings and flew over the river into the sunset, really just taking her time soaring across across the river. And it just felt like a very blessed moment, to be in the presence of the great blue heron.”

I ask Salloway how he is still able to access joy when so much of his time is spent contemplating the looming end-times.

His answer? “Love,” Salloway says. “Yeah, I think that's a powerful force that keeps bringing me joy. And being able to witness just amazing energy and action rise out of struggle inspires me every day. … It's amazing what we're capable of.”

There is a finality to this remark that signals the end of our interview. We head back to the car as the sun begins to sink. The light has become incandescent, the day, impossibly, more beautiful. It really is nice out.

Billy Wylder celebrates the release of "Strike the Match" at Oberon in Cambridge on Friday, Nov. 9.