“Lately I’m getting the feeling that I came in at the end. The best is over,” sighed Tony Soprano to his psychiatrist 20 years ago this week, in the pilot episode of HBO’s mob drama that changed the television landscape forever.

Of course “The Sopranos” was not the first TV show to bring cinematic storytelling techniques to the small screen. “Miami Vice,” “Moonlighting” and “Twin Peaks” had notably bucked network conventions before, but creator David Chase’s violent, hilarious and proudly profane family drama all but invented a new kind of cable series — one with serious artistic aspirations, intended for discerning adults. Suddenly “the boob tube” was de-stigmatized to a point where a publication as highfalutin’ as The New York Times said the show’s first season “just may be the greatest work of American popular culture of the last quarter century.”

Two decades later it’s impossible not to see the sons of Tony Soprano all over television screens and laptops everywhere, with seemingly infinite streaming series and the giant-sized ambitions of “prestige TV” now drawing big-screen talent with results from the sublime (Steven Soderbergh’s “The Knick”) to the ridiculous (Martin Scorsese’s “Vinyl”). Yet this whole televised revolution would never have taken place if it hadn’t been for that portly New Jersey gangster gracelessly clomping down to the end of his driveway to pick up his Star-Ledger at the start of every season.

Ironically for a program that marked the beginning of so many things, “The Sopranos” was a show about decline: moral, spiritual and physical. These low-rent remnants of the past-its-prime New Jersey Mafia became a stand-in for America at the dawn of a new century; faltering and clinging to obsolete customs, hopelessly hooked on nostalgia for good old days that weren’t so great to begin with. The show transcended the sitcom trappings of its premise — mob boss goes to a shrink to complain about his mother — to dig into existential aspects of modern malaise. There’s an aching void inside of these people, one that all their eating, stealing, screwing and conspicuous consumption could never fill.

As TV critics at Tony Soprano’s newspaper, former Star-Ledger staffers Matt Zoller Seitz and Alan Sepinwall were on this beat before the first episode even aired. Commemorating the show’s 20th anniversary, they’ve just released “The Sopranos Sessions,” a hefty compendium containing detailed recaps of all the show’s 86 episodes, along with contemporaneous clips of their original coverage and — most excitingly — 85 pages of new interviews with Chase, who drops his usual grouchy guard here and even opens up about the show’s still-controversial final episode, which has been starting arguments since the moment it cut to black back in 2007. 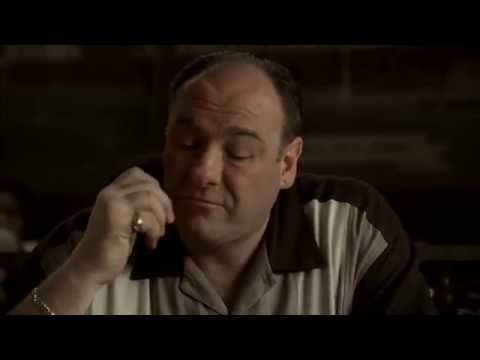 Chase divulges that his original vision for the program was more outwardly cartoonish, with E Street Band guitarist Steve Van Zandt in mind for the lead. “I saw it as a live-action ‘Simpsons,’ and I was pretty serious about it.” But the entire texture of the show changed when Chase met his eventual leading man. “Once Gandolfini showed up it was pretty obvious that his face and his words helped direct me to what it should be.”

Terrifying yet oddly adorable, the late James Gandolfini’s sad, psychotic teddy bear performance as Tony Soprano embraced the character’s contradictions and dragged the audience down an eight-year spiral into some of the most unforgivable acts ever committed by a television character. We forgave him anyway, drawn in by the sadness of his eyes and that impossibly endearing, childlike grin. Tony was at once a fierce fighter and self-pitying mama’s boy, devoted husband and serial philanderer, loving family man and cold-blooded killer. As the show wore on Gandolfini’s weight swelled along with the character’s self-loathing, his labored breathing becoming an integral part of the soundtrack.

At times it felt like Chase and Gandolfini were deliberately baiting the audience to see how far we would follow. The two were both outspokenly ambivalent about the popularity of their creation, and indeed few television programs have ever had as adversarial a relationship with their audience as “The Sopranos.” The show took great pains to set-up payoffs that were deliberately denied, dispatched adversaries when you least expected, and generally zigged where any other series would have zagged. Chase made an art of the anticlimax, all the while taking barely veiled jabs at a certain kind of viewer, whether via mocking shots of bystanders and lookie-loos gawking at the violence or the ineffectual FBI agents listening to wiretaps as if following their favorite soap opera.

One of Seitz’s earliest articles reprinted in “The Sopranos Sessions” is headlined, “The Godfather Meets Ralph Kramden,” and when discussing the show’s deeper meanings it’s equally important to foreground just how freakin’ funny it was. All the knucklehead banter and dense dialogue riddled with malapropisms offered more belly laughs than any television comedy could offer, with Gandolfini’s exasperated eyebrows doing most of the heavy lifting. The man had about 20 different ways of looking put upon and every episode utilized at least four.

Tony always claimed his career was in “waste management,” and “The Sopranos” had an overt symbolic obsession with consumption and refuse. The characters all speak in brand names and gush about new products — their latest and greatest in fashions and technology now hilariously dated and thus even more pointedly satirical — while constantly stuffing their faces. (Tony never walks into the kitchen without going right for the fridge.) Meanwhile no show has ever devoted nearly as much screen time to its characters going to the bathroom. Week in and week out it’s all indigestion, agita, and even Drea de Matteo’s scantily clad sex bomb Adrianna suffered from irritable bowel syndrome. The surprise isn’t so much that Tony’s trusted capo Gigi died of a heart attack on the toilet but that he was the only character to do so.

Chase may have borrowed a lot of his cast members from Martin Scorsese’s gangster movies, but his storytelling rhythms owe more to European art cinema from the 1960s. “The Sopranos” was awash in surreal dreamscapes and oblique imagery, in later seasons devoting massive chunks of screen time to Tony’s subconscious visions. It’s not easily binge-watched, the show being far more concerned with mood and theme than dispensing serialized plot points in a timely fashion. Narrative loose ends and discursive asides weren’t just part of the trip, they were the whole point of the journey.

Speaking of Journey, this brings us to that endlessly debated series finale, which “The Sopranos Sessions” authors devote an entire chapter to arguing among themselves about before Chase finally chimes in and muddies the waters even further. The fact that 12 years later people are still up in arms about the ending is to me a sign of how well it worked. The unresolved nature of that sudden cut to black still lingers and itches in my mind, in a strange way keeping the show alive for me while the more pat, satisfying resolutions to shows like “Breaking Bad” or “Friday Night Lights” made them feel over and done with, to be put on a shelf somewhere and seldom thought of again.

At one point in the book Chase slips and calls it “the death scene,” which will no doubt provide all sorts of new ammunition to the contingent that has spent the past dozen years analyzing the finale like the Zapruder film, spilling thousands of gallons of virtual ink trying to “prove” beyond a reasonable doubt that in the show’s final moments, Tony dies. This is a weird fixation some people have, as if trying to “solve” a deliberately ambiguous work of art will make them feel they’ve conquered it somehow.

For me, the ending’s meaning has always been something more precarious and elusive, making visceral the sensation of having this story and these people we’ve grown to love over many years violently ripped away forever without a moment’s warning, abruptly plunging us into silence and nothingness. It’s a death scene alright, but we’re the ones who got whacked.