Like Superman’s crash landing and Spider-Man’s spider bite, all musicians have an origin story. For Aubrey Haddard, the tale that explains her powers is an encounter with the blues singer Susan Tedeschi at the Clearwater Festival in Westchester, New York when Haddard was a teen.

“It was her voice, for sure. I remember hearing it before I saw her,” Haddard says. "[Tedeschi] has this unique voice, this incredible presence," she recalls thinking. "And she's doing something with it." It was that moment that something clicked for Haddard. Maybe she had something to say with her voice, too.

The comparison makes instinctive sense. Like Tedeschi, Haddard, 25, has the kind of voice that divas are made of, a husky belt over which she wields exquisite control. With pipes like that, the obvious choice is to go big. But Haddard rarely does. Instead she hints at power, her voice expanding swiftly before curling tenderly inward. It’s an intimate conversation that she conducts with herself, in soul-inflected melodies, about the pleasures and anguish of young love. 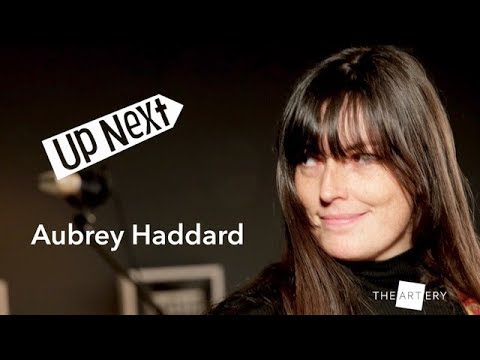 The singer grew up in Gardiner, New York, a small town in the Hudson Valley. She describes an idyllic childhood in a “cultural mecca” where refugees from the New York City art scene settled to raise families. Afternoons were spent helping out at an antique shop owned by her mother, who is also a painter. As for Haddard’s father — “You know how you don’t know what your dad does?” she asks, abashed, before settling on “an AV guy” who works for the state. She has two siblings, an older sister and a younger brother.

Haddard started singing as a kid, making up songs with her sister. “We had a band called the Blue Jeans Sisters, and my sister got to wear the denim bell-bottoms and I had to wear the denim shorts,” she recalls, "which I hated, wearing shorts.”

She guesses she played her first real gig at 15. “My mom caught wind of someone looking for another singer or something like that, and hauled me out to a dive bar and I did a little audition or something, and we had a gig the following week,” she says. “It was very cute, in retrospect.”

Still, at the end of high school Haddard wasn’t totally sold on music, thinking she might go into engineering. Instead she enrolled in a nonprofit gap year program and taught abroad in Senegal. Ultimately she decided to apply to Berklee College of Music, where she studied for two years before quitting to pursue her career.

Haddard released her first solo project in 2016, an EP called “Adult Lullabies.” Until that point she mostly played in bands, like the sprawling funk outfit the New Review — a fitting choice for someone with Haddard’s raw vocal power. But “Adult Lullabies” is a stripped-down affair, just Haddard and her acoustic guitar, recorded on the spur of the moment to use up some extra studio time. She sings in a near-whisper, her voice close, its sibilants landing with a hiss as her fingers squeak across the fretboard.

“Blue Part” sees Haddard step into a bigger sonic space. She abandons the acoustic for an electric imitation stratocaster; drummer Josh Strmic and Haddard's boyfriend, the bassist Charley Ruddell, complete a lean trio. The songs on “Blue Part” hew mostly to moody neo-soul in the vein of the British singer Lianne La Havas or the American musician Emily King, but Haddard channels other sounds as well: a lacerating guitar riff on “What I Need Now” flirts with post-hardcore heaviness, while the lyrical “Take Me Under” wraps itself delicately around a bossa nova groove.

The story of Haddard and Ruddell's romance simmers beneath the surface of “Blue Part.” Occasionally it breaks through, like on “Charley,” a feverish love letter penned by Haddard early in the couple's courtship. But as much as “Blue Part” concerns itself with romance, it’s not lovey-dovey. There is uncertainty in Haddard’s depiction of love, and pain. “Helpless, lost at sea,” she sings of desire, or perhaps heartbreak, on “Seaweed & Sand." “Strung out, anxieties.” In Haddard's telling, love, like a voice that’s big, is so much more than what we’ve been lead to believe.

“Aubrey is a very emotional person. She’s maybe, in some ways, hyper-emotional,” says Ruddell. “And she reflects that in her art. She kind of floors me, when she’s playing, with how sensitive she is.”

Haddard describes songwriting and arranging as a painstaking rummage, a quest for the very best ideas. Working with Ruddell and Strmic, she will chip away at an idea until it reaches its ideal form. “It’s so much more important to find the perfect part than a part that works, because that’s just how you get the best song out of it,” Haddard says. “There’s a level of diligence to it.”

At the same time, she talks about “Blue Part” as an exercise in learning to let go. “As my songwriting has become more of what is on display, rather than my voice or my playing — my technique — I feel like some songs, some words, some syllables, call for a flat note,” Haddard says, sounding slightly incredulous. She points to the last chorus of “What I Need Now." Sure enough, if you listen closely, she is, as they say on “American Idol," a little pitchy. But more noticeable is the way Haddard’s voice breaks, achingly, around those final lines.

Aubrey Haddard is performing at the Paradise in Boston on Saturday, Feb. 9 and at Great Scott in Allston on April 20.