A few months ago, the musician and performance artist Amanda Palmer posted a video announcing the March release of her album “There Will Be No Intermission.” In it, she stands in a romantic-shabby living room. She holds a stack of hand-lettered signs, which she drops dramatically, one by one, to the floor. The cards begin: “Hola. Please find your seats. This performance will last six years,” before going on to summarize the ups and downs of the last six years of Palmer’s life, which include having an abortion, giving birth to a son and getting yelled at on the internet. The room slowly darkens as mournful piano music plays. The cards are a callback to an earlier promotional video of Palmer’s, which in turn was a reference to Bob Dylan’s iconic music video for “Subterranean Homesick Blues.” It is classic Amanda “F---ing” Palmer (as she sometimes styles herself), an act of self-mythologizing both clever and grandiose. 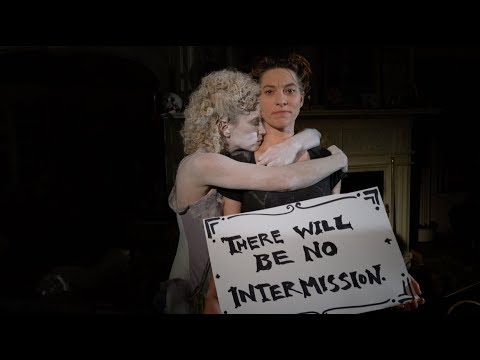 Palmer is one of those celebrities who invariably provokes a reaction, on one extreme or the other. Her fans, many of whom know her from Boston alt-rock band The Dresden Dolls, love her for her honesty, her wit, her style and, presumably, her music. Her detractors — well, her detractors likely don’t know what, exactly, they dislike about her. They may point to the controversy that engulfed Palmer in 2012, when she raised $1.2 million on Kickstarter, and then put out a call for local guest musicians to perform with her on tour in exchange for beers and hugs. (Palmer ultimately agreed to compensate the guest musicians with money.) She can be tone-deaf, like the time, following the 2016 election, that she said Donald Trump would “make punk rock great again.” But I suspect that for a lot of people, it’s something about Palmer herself that rankles. Her propensity to reveal the details of her personal life can border on self-indulgent; at times, this habit comes off as performative, and therefore not altogether genuine. She can seem both winkingly self-knowing and astoundingly un-self-aware.

These qualities manifest as both strengths and weaknesses on her new album, “There Will Be No Intermission.” Musically, Palmer uses a lot of the same tricks she always has, like big dynamic shifts and a piano-driven palette bolstered sparingly by strings, synths and percussion. On balance, there is more feeling than craft in these songs; many could use a trim in length — two clock in at more than 10 minutes — and a bit more melodic imagination. Still, there are some sturdy compositions here, like the poignant, propulsive "Drowning In Sound," and some probing explorations into loss and motherhood. “At least the baby didn’t die,” Palmer croons on “A Mother’s Confession” with characteristic gallows humor. “You’ve really got this death thing down,” she sings, wryly, in “Death Thing,” to a departed friend.

But the album is dwarfed, as is everything she touches, by the presence of, well, Amanda Palmer — her sheer force of personality, her mastery of melodrama. Today, Palmer's persona looms so large it's easy to forget how fresh, even radical, the music of the Dresden Dolls was when the duo emerged in the early aughts. Palmer, a pianist and singer, shared a special rapport with her bandmate, the drummer Brian Viglione; as she pounded away on her keyboard, veering from hushed to bombastic, he matched her, beat for cathartic beat. Palmer wrote with bracing candor about everything from relationships and sex to self-harm and child abuse. Her lyrics bristled with wordplay and black humor. “But with every Jeep I see/ My broken heart still skips a beat,” she sang about seeing an ex-boyfriend’s car around town in the “The Jeep Song.” “I guess it’s just my stupid luck/ That all of Boston drives the same black f---ing truck.” She knew better than anyone that comedy and tragedy are often the same thing.

And then there was the look: Viglione in a three piece suit and a bowler hat, Palmer in striped leggings and ornately drawn eyebrows, both wearing white pancake makeup. (A holdover, perhaps, from Palmer’s oft-referenced stint as a living statue in Harvard Square.) They called their music “Brechtian punk cabaret” and their live shows were sweaty, theatrical affairs that sometimes included nudity. Maybe they were a little much; maybe they milked that instinct for drama for all it was worth. But they spoke to a whole generation of weirdos and misfits, puncturing popular music’s taboos with knife-sharp songs about depression, trauma and the pain of being different. And they looked cool doing it.

It was the heyday of blogging, and Palmer took to it like a living statue to body paint. On her blog, she chronicled her exploits and reminisced about her childhood. She was conversational, funny and sometimes shockingly confessional. She ushered you into her world, introduced you to her coterie of artsy oddballs, whispered her deepest secrets in your ear.

The blog was a direct link to Palmer’s fans, and she knew, instinctively, how to work it. In subsequent years, she parlayed that knack for engaging her audience into an unusually successful and visible career as an independent artist. After a public split with her label, Roadrunner Records, Palmer decided to make a go of independence. She raised money on Kickstarter and Patreon, offering perks like coming to your house to paint your portrait or inviting fans to participate in writing a song. She nursed a symbiotic relationship with her fans: by donating directly, they became stakeholders in her work and gained access to her world.

Since the heydey of the Dresden Dolls, Palmer has released three studio albums as a solo artist: “Who Killed Amanda Palmer?” in 2008, “Theatre Is Evil” in 2012 with the Grand Theft Orchestra, and now “There Will Be No Intermission.” In between, there were compilations and live albums and a few duo projects. Palmer also returned to her performance art roots, starring as the emcee in the American Repertory Theater’s 2010 production of “Cabaret.”

The independent musician has become something of a crowdfunding guru. In 2013, Palmer gave a popular TED Talk on the topic, called “The Art Of Asking,” and in 2014 released a memoir by the same name. Her million dollar Kickstarter, coupled with her expectation that fans play for free, may have been distasteful, but it’s hard not to marvel at her success. In a withering music industry, Palmer didn’t merely survive — she innovated. She found a path outside of a label system that could be sexist and exploitative, made art on her own terms.

Palmer still blogs prolifically. She has mastered the art of the diaristic life update that is also a plug, flipping seamlessly between personal musings and promos for her latest project. It was on her blog that she announced the birth of her son and wrote touchingly about the death of a friend. It was there, too, that she documented her surprise flash mob wedding to the author Neil Gaiman, and where she continues to meticulously, lovingly, verbosely chronicle every aspect of her work — often for the sole benefit of her Patreon funders, who also gain access to exclusive content and peeks behind the scenes. Life as spectacle, spectacle as art: Increasingly, Palmer’s life is her greatest performance. In being Amanda Palmer, she exhibits real creativity and skill. Music seems like an afterthought.

Editor's Note: An earlier version of this incorrectly stated the location of the promotional video. The post has been updated.

This article was originally published on March 08, 2019.