Playwrights and brothers Daniel and Patrick Lazour say that the idea for their musical, which is having its world premiere at the American Repertory Theater this month, came from a 2011 photograph by photojournalist Ed Ou. In it, eight young Egyptians gather around a table with laptops, empty cans of Diet Coke and an ashtray. They’re uploading images from the 18 days of protests in Cairo’s Tahrir Square. In the background, one of them lights a cigarette for another, who is wearing a Johnny Cash T-shirt. The spirit is palpable.

“It’s just this incredibly energetic photograph of all of these young people making change and finding a way to overthrow their 30-year dictator, Hosni Mubarak,” Patrick says.

The brothers grew up in Boylston, Massachusetts, and are currently based in New York. Now they’re back in their home state for the premiere of their musical, “We Live in Cairo,” for which previews begin May 14 at the A.R.T.'s Loeb Drama Center in Cambridge.

The musical follows six youth activists as they navigate the Egyptian Revolution of 2011 and its aftermath during a wave of uprisings in the Middle East against authoritarian regimes. The Arab Spring started with protests in Tunisia in late 2010, and Egypt followed close behind. Social media helped fuel these revolutions by spreading activists’ messages around state censors and out to the rest of the world.

When they first began writing the play, Daniel and Patrick were 19 and 23 respectively. They wanted to capture this very seminal, inspiring moment of revolution in Egypt. As Lebanese Americans who grew up celebrating Arab culture, they sought to create a play that would combat the negative, post-9/11 portrayal of the Middle East in the Western media.

“We wanted to share that experience of ordinary young people, cosmopolitan in this case, tech savvy and living in a globalized world,” Daniel says. 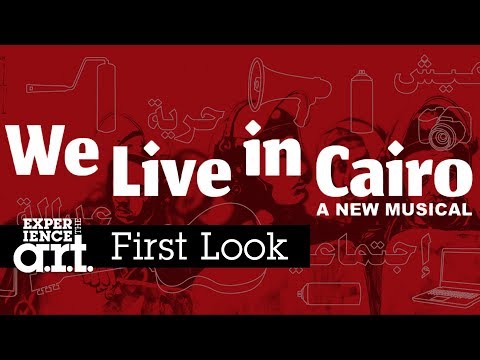 Every character in the play is based on a composite of real stories that the brothers heard throughout their research. One of the characters is Layla, a photographer in love with an activist who at the beginning of the play is unsure of where she fits into the world of protests. Her character then shifts as the promise of the revolution fades.

When the brothers workshopped the show at the American University in Cairo, they realized there was a bigger story that they were missing. What is now Act 1 of the play was the entire first draft.

After Mubarak resigned, the Muslim Brotherhood’s Mohamed Morsi became the first democratically elected president of Egypt. Many celebrated his presidency. Others called for his ouster as international human rights groups expressed concerns about the administration’s control of the media and dissidents. In November 2012, he issued a temporary constitutional declaration granting himself unlimited power. Less than a year later, he was ousted in a military coup. Minister of defense Abdel Fattah el-Sisi took over and is currently poised to stay in power until 2034.

The brothers realized they couldn’t tell the story of the Egyptian Revolution of 2011 without telling the story of the unexpected, tragic twist that came after. Obie-award winning director of the play Taibi Magar says that everyone loves rehearsing Act 1 for its positive, inspiring energy.

“Overthrowing a president is so fun,” Magar says. “Dealing with the tragedy involved after is so heavy but I think every day we try to remind ourselves why we are doing this, and I think it is to honor the martyrs of the revolution and the people across the world who have lost their lives fighting for social justice and freedom.”

In order to capture the complex post-revolutionary reality, the brothers consulted with Harvard Kennedy School of Government Professor and Faculty Chair of the Middle East Initiative, Tarek Masoud. He also happens to be a big fan of musical theater.

“I think today the dominant emotion in Egypt is fear,” Masoud says. “Fear of the unknown, and Egyptians look to the situation in a place like Syria which is wracked by civil war or Yemen or Libya and they want to avoid that outcome for their own country.”

But he’s quick to point out that just because people are cowed by fear today, doesn’t mean it will stay that way.

“The deep yearning that the Egyptian people and that young people all over the world have for freedom, for the accountability of their leaders, for dignity, it’s extremely deep and impossible to extinguish,” Masoud says.

At the end of the play, the young protesters in “We Live in Cairo” grapple with what they are fighting for. But Layla, the reluctant revolutionary, is sure that she will not settle for survival. Cairo is her home, and she plans to live there and work to make it better one day at a time.

Previews for the American Repertory Theater's world premiere of “We Live in Cairo” start May 14 at the Loeb Drama Center, and the show will run through June 23.