For a hot air balloon to fly, the weather needs to be perfect. Too hot, and the balloon won’t float. Too windy, and it won’t inflate. Too rainy and — well, no one likes rain. But when it does fly, it’s frictionless. No motor rumbles underneath; no propeller roars overhead. Besides the far-off sound of the highway and the crackle of the radio, a hot air balloon is silent.

Except, of course, when it’s not. A hot air balloon is heated with propane, which means every so often the pilot shoots a jet of fire into the balloon to keep it aloft. It’s very loud, and very dramatic.

“It surpassed my expectations,” curator Pedro Alonzo tells me between ear-rattling bursts of fuel. It’s a clear, windless day, and we are floating over the woodsy expanses of Harvard, Massachusetts. Alonzo is telling me about the project he brought to the Massachusetts conservation group the Trustees of Reservations: a hot air balloon covered in shimmery material that reflects the sky above and the forests below. (In the spirit of full disclosure, the Trustees are a financial supporter of WBUR.) The balloon was created by the Los Angeles artist Doug Aitken, and it’s set to appear at several Trustees sites throughout the state this month.

This is just a test flight. The project’s organizers want to make sure the balloon is ready for its official debut in a couple days. So far, so good — the weather is perfect.

Here’s the thing: You can’t actually steer a hot air balloon. You pretty much have to go wherever the wind takes you. Which is how we find ourselves hovering over the state prison in Concord, looking for a place to land. When we finally touch down next to a school, a police car rumbles up. An officer pokes his head out the window.

“You scared us!” he exclaims. “Yeah, you can’t be hovering over the prison, or in proximity.” Apparently, there’s some concern that prisoners might attempt to escape in a hot air balloon. Alonzo and the pilot apologize, and the officer nods. “That’s pretty nice, though,” he says, looking at the balloon, before driving off.

The police aren’t the only ones who’ve caught wind of our appearance. Calli Quinn, of Ayer, spotted the balloon in the sky, and followed in her car with her 9-year-old daughter.

"I was like, 'What is that in the sky?' And I was like, 'Quick, get out of the house!'" Quinn says, still breathless. She couldn’t tell what the balloon was at first. It was eerie, and difficult to describe.

That’s exactly the sort of experience Aitken had in mind when he envisioned the project.

“I love that idea that, you know, someone can just see it out of the corner of their eye. That someone can look at that object [and say], ‘What the hell is that thing? I'm going to follow it and see where it goes,’ ” Aitken says. “That idea where there’s this kind of, these moments of beautiful disruption across the landscape.”

So keep your eyes peeled — the balloon may make some surprise flights this month, weather permitting. But mainly it’s supposed to stick to a schedule, appearing at Trustees properties across the state. Technically, there are two balloons — one, outfitted with LED lights, was designed as a backdrop to a series of concerts and talks with prominent musicians and thinkers, called happenings. A hip musical lineup features performances by the likes of Mac DeMarco and Destroyer. The talks are each organized around a theme: the future.

“I think the future is the great question for all of us,” Aitken tells me. “It's the one common thread [that’s] inevitable, that we all share. And it's the unknown. And I think that art should look towards the unknown.”

In a nod to the unknown, Aitken calls the project "New Horizon." It's a typically audacious undertaking for the artist and filmmaker, who has mounted site-specific installations underwater, on the sides of buildings and on a barge off the coast of Greece. His pieces can be devilishly tricky to get to — his underwater sculptures, for example, required visitors to go scuba diving. Aitken’s often immersive work has been praised for its ingeniousness, and criticized for not living up to its promise. The artist is a master of spectacle, and he wants to plunge his audience into it — or, in this case, send them flying.

The point is that he doesn’t want people to experience his work passively. “We've seen art as something that we see and we judge, and maybe it's inside a space, maybe it's on a wall,” Aitken says. “But I think that, to me, you know, life is experience, and art should be experience, also.”

Here's a glimpse of the balloon during some of the test runs: 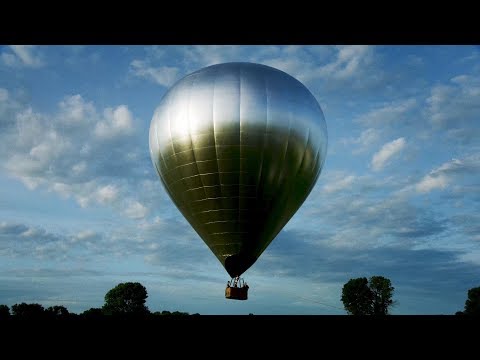 "New Horizon" is the most ambitious project the Trustees have commissioned as part of their Art and the Landscape series, now in its fourth iteration. They hope Aitken's balloon will draw new audiences to their properties.

But the project is not without its challenges. First, there is the matter of the balloon’s own impact on the environment, a major concern for the Trustees.

“We looked very carefully at every site that the balloon is visiting,” says Trustees vice president of the eastern region Alicia Leuba. “We did full assessments to make sure that any impact that we might have would be completely negligible or reversible.”

Still, the balloon’s reflective Mylar shell is not biodegradable; the plan is for Aitken to keep the balloon, and possibly reuse it.

And then there’s the matter of price: $250 for a tethered balloon ride. Leuba says the price will help pay for the installation and raise funds for the Trustees. The group hopes to balance the more costly balloon trips by pricing the happenings at $25 and $40, and offering two family days that are either cheap or free.

But the biggest obstacle to witnessing Aitken’s balloon isn’t cost — it’s the weather.

That's what is on everyone’s mind when a crowd gathers at the Long Point Wildlife Refuge on Martha’s Vineyard for the first public appearance of Aitken’s balloon. The morning’s scheduled flights were rained out. Now, the beach glows golden under a huge sky. But the balloon is nowhere in sight — it's too windy.

Leuba steps onstage to welcome the crowd. “Thank you for your patience,” she says. “We know there’s no balloon currently behind us, but the weather is continually changing, as it likes to do in New England.”

As the evening wears on, nature does what it does best. First, it drizzles. Then it unleashes a stunning sunset that turns the ocean orange. Still — no balloon. The crowd begins to thin. It's dark by the time the New York cellist and singer Kelsey Lu begins her spectral, hypnotic set.

And then, in the distance, something stirs. The balloon, laid out on its side at a point further down the beach, begins to inflate, rising slowly like a sleepy silver beast. It swells, and in slow motion, rises. For a moment, it looks like it might take off.

Then, with a shimmery ripple, it collapses. There would be no balloon tonight.

The next morning, Aitken and his crew are back at Long Point to attempt another flight. The artist looks tired, and inexplicably chipper. Asked how he feels about the prior evening’s disappointment, he points out that you can't always control what happens when you take art out of the gallery and into the world. Last night, he says, was “radical.”

“I like that idea of things that are not premeditated, and there's a sense of discovery,” Aitken tells me. “I think as we move forward, I think the viewer also wants to be empowered, the viewer wants to find things and kind of author their own experiences.”

The balloon fails to fly that morning, too.

Though Aitken probably wouldn't call these failures — his work is by nature elusive, and at times inaccessible. The promise of Aitken's grand vision is a singular, transcendent experience. Like any rare and rising thing, sometimes it's just out of reach.