Timothy Scalona was 13 years old when his parents lost their home.

He remembered the day he, his parents and his six younger siblings were forced out. A sheriff came to the door to make sure they left.

The yellow two-story house had been Scalona's home for more than a decade. He and his siblings scrambled to grab as many belongings as they could — especially things with sentimental value, like pictures and school trophies — but ultimately, they could only take what they could physically carry.

First, the family stayed with friends. But after a few months, they were left without any other choices and became homeless.

"[It was] a crash course in surviving trials and tribulations," he explained.

In that first year, the family bounced from shelter to shelter and single-room hotels.  They moved at least a half-dozen times, and no matter where they ended up, there was never really enough space for nine people.

"There were so many noise distractions in the shelters," he said. "There was constant conversation. Especially arguing about food and bills."

No space. No quiet. And Scalona was trying his best to also focus on high school. He'd often stay after school or work in the public library to get homework done. But when that wasn’t an option, he had to make spaces inside the shelters work.

“Many nights were spent on the bathroom floor getting homework done because that was the only place that was relatively quiet compared to the other areas,” said Scalona.

Whatever it would take, Scalona knew he had to find a way to go to college. He saw it as a path to stability and a better life.

Come senior year Scalona scraped together enough money to tour and apply to a few colleges. He decided to go to the University of Massachusetts, Amherst.

For Scalona, adjusting to college life came with challenges — and not just the average anxieties and surprises felt by the other freshmen.

There were big realizations, like that he finally had stable housing. No one was coming to kick him out. But Scalona said it took a while to fully adjust to the new mindset.

"I kept boxes under my bed because I was very attached to the idea that I wasn't going to be able to stay there for a long time," Scalona explained. "Mentally, I was still living in the hotels. I hadn't left."

It took months before he really started decorating.  The first things to adorn his walls were posters from the TV show “The Walking Dead." Scalona said he loved the show, which tells a story about refugees trying to survive a zombie apocalypse. He felt he could relate to the characters.

"It follows people that have survived traumatic situations, that are sort of nomadic and moving from place to place," explained Scalona. "So for me, to see my experience even minimally reflected in something gave me hope every week and inspired me to continue doing what I was doing."

Unlike other students, Scalona loved that he only had to share his dorm room with one other person.

Then, there was the dining hall. After years of getting by on canned foods or fast food, Scalona savored the endless hot meals offered daily at UMass. But even inside the dining halls he said he couldn't escape the lingering effects of his struggles with homelessness and food insecurity.

"When you're sitting in a dining hall," he explained, "and you don't know how to eat crème brûlée and people laugh at your experience for not understanding what it is or how to eat it — that was a very big part of the transition." 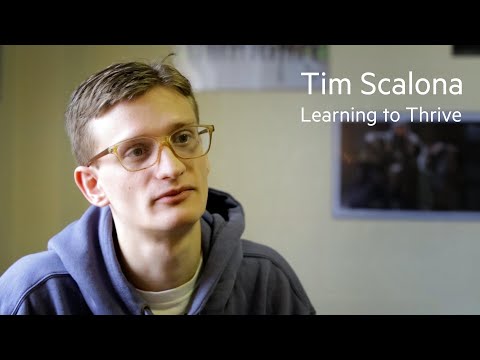 Little experiences like that made him feel like an outsider, he said. They also drove home the idea for him that people who grew up living in poverty were almost unseen on college campuses.

Regardless, he was determined to find a place for himself at school. He started looking for ways to get involved and meet other people. Scalona ran for student government and joined advocacy groups focused on anti-povery issues and education, like The Center For Education Policy and Advocacy. He also shared his past experiences with homelessness as much as he could, whether that was through personal conversations or giving speeches at scholarship banquets.

Pretty soon Scalona's openness started paying off. He met more people with similar life experiences. Today he and many of those students have started formalizing their alliance. They're in the process of bringing a chapter of FLIP National, a nonprofit working to empower first-generation and poor college students, to UMass.

Now a senior, Scalona hopes to graduate in May with a degree in political science and journalism. He said he's learned a lot in college and is proud of the work he's done on campus. But Scalona said it's the community and support networks that he's built for himself here that have made the biggest impact.

"Now that I’ve been here for a while and have been re-acclimated to stability, I think the biggest thing I’ve learned is how to thrive," he said.

But while Scalona may have escaped the cycle of homelessness, that experience is still very real for his family. It's a reality he's reminded of often.

"It’s such a dual existence," he says. "I will be doing homework here or talking with friends and then I’ll get a message from my mom that she’s about to be evicted, or they don’t have enough money to pay a certain bill."

He's still working out ways to find balance in his life. But as graduation nears, his focus has shifted to the future.

Scalona is considering law school, and maybe, one day, running for public office. He hopes he can use his personal experience with hunger and housing insecurity to push for better policies so that more people can find a way out of those situations, just like he did.