A major orchestra is a unique organism. Its existence relies on highly-focused discipline and a creative collectivity between more than 100 musicians — sustained week after week — to do what it does.

It also needs an audience.

So what happens when the Boston Symphony Orchestra can't play for its fans at Symphony Hall through at least May 2nd because of the coronavirus?

“People actually have to be there in order for this thing to happen,” horn player Rachel Childers said of the symphony, “And when people can't actually get there, what is it?”

She pondered this during a morning Zoom interview, coffee in hand, at home with her two young children because schools are closed. Practicing and performing at Symphony Hall are off-limits, and Childers said moving forward is “totally unchartered territory” — like everything else in our upended lives these days.

Along with cultural institutions across the country – from museums to Broadway theaters and opera companies – the BSO has been brainstorming ideas for sharing its music in new ways.

“People in administration are trying to figure out, you know, how to keep us busy,” Childers said, “working and feeling like we're part of the community.” They also want to reach audiences in a time of crisis.

One solution is a concept called “BSO at Home.” The musicians are self-producing informal videos that feature them playing, talking about their instruments and reflecting on the importance of music in their lives. These snapshots of their individual personalities will be posted on the BSO's website and YouTube channel.

Making music independently — and from a distance — presents some technical hurdles for Childers. She doesn't have a home studio or high-quality microphone and said she hopes what she plays sounds OK.

“The acoustic of Symphony Hall is very special,” Childers added, “My condo doesn't have that.” 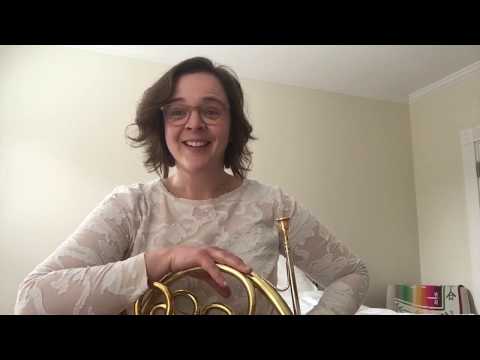 The BSO's world-famous concert hall accommodates 2,625 people during the orchestra's season. Speaking from the now quiet and largely empty historic building BSO CEO Mark Volpe said he and about a dozen staff members have been pivoting their energies in the wake of cancelations due to the coronavirus.

“Staying connected to the audiences is critical in this environment,” Volpe said, “I think the more holistic and the more altruistic perspective is, you know, these are times where people actually do need music.”

The musicians need contact too, he added, “Virtually every day I hear from isolated players.”

In addition to the “At Home” videos, the BSO is offering other ways to share its music. For one, Volpe said the classical radio station WCRB offered to broadcast ENCORE performances from the past five years every night but Sunday. The musicians voted unanimously to support the idea.

In the mornings another option will be available on the orchestra's website in the virtual program dubbed, "Great Performances from the BSO's Archives." Volpe said artistic administrator Anthony Fogg plumbed the history-drenched trove stored at Symphony Hall to identify programs for daily playlists. This week they're posting music director Andris Nelsons leading Sibelius Symphony No. 2 from 2014, Seiji Ozawa with the orchestra in a 1987 performance of Stravinsky's Symphony of Psalms, and Serge Koussevitzky conducting Beethoveen Symphony No. 9 in 1938.

Deep thought went into the curation, Volpe explained, because the team wants the selections to bring beauty and meaning to listeners as they deal with the uncertainty brought on by the outbreak.

“There's no playbook,” he said, “As time progresses things will shift in this dynamic situation.”

The coronavirus's power hit the BSO early when the orchestra scrapped its long-planned tour of East Asia that was scheduled to begin Feb 6. Volpe said the 10-day trip to Seoul, Taipei, Hong Kong and Shanghai was a multi-million dollar investment. “We're still grappling with the financial dimensions of canceling,” he said.

Now symphonies across the country are wrestling with how to respond to suspending performances and whole seasons. Volpe said he's gotten calls from the New York Philharmonic, the Chicago Symphony and the San Francisco Symphony. “Everyone's grappling with some of the same issues in different environments.”

Money is certainly one of them.

According to Volpe the BSO runs on an annual operating budget pushing $110 million.

“We're labor intensive, 65 to 70% of what we spend goes to people – human beings,” he said, “You know, the staff and orchestra and artists and conductors, that's our core. That's the biggest part of the budget by far.”

With such a large number of concerts canceled the financial impacts wrecked by the virus are still being assessed, but Volpe estimated losses will be in the seven figures.

“This thing is happening so fast,” Volpe said, “we have to see where we are with the Spring Pops and Tanglewood."

Tanglewood is the orchestra's summer home in the Berkshires. In addition to its season-long festival of concerts, and the new Learning Institute that opened for the public last year, the Tanglewood Music Center educates 155 young fellows from around the world. The campus also hosts the Boston University Tanglewood Institute and music education programs for high school students.

Tanglewood plays a big role in the Berkshire's creative economy, Volpe said. Last week he met by phone with CEOs from other western Massachusetts cultural institutions.

“Everyone's desperate to know what we're going to do because we drive 350,000 hundred people to the Berkshires every summer,” he explained, adding, “it's a different kind of pressure. You know, the hospitality industry out there is tied to us.”

The BSO is the largest performing arts organization in New England. Together Volpe said Tanglewood, the Symphony and the Pops employ 1,200 people, and of that number 300 people are employed full time.

Layoffs loom over every sector in the U.S. including arts and culture. Last week New York's Metropolitan Opera furloughed its union musicians and stagehands days after launching free live streams in response to the coronavirus.

When asked about this news in relation to the BSO, Volpe replied he doesn't comment on other orchestras. “We are still paying people, if that's the question, in terms of the full time orchestra,” he said, “as well as the staff.”

The BSO is currently sorting out what the policy will be for its 900 “casual” employees including the ushers at Symphony Hall and Tanglewood.

In terms of layoffs because of the pandemic Volpe was frank. “If this were a defined kind of period I could give you a definitive answer, but I can't give you any answer because, I mean, you hear 18 months from some people – I don't know what that means,” he said, adding, “We're just dealing with what's immediately in front of us.”

BSO departments and the board have been meeting regularly to address what may lie ahead, Volpe said. He's also been talking with other Boston arts leaders about how to navigate the altered cultural landscape and the tough decisions they'll likely have to make.

Volpe also shared concerns about the larger community's health – both physical and mental – with so many people confined in their houses and apartments. He hopes the new “BSO At Home” series might provide some joy, solace and moments of respite for audiences. That's part of the orchestra's mission too, Volpe added, and his team has work to do.

Principal bass Larry Wolfe is up for the challenge. He joined the BSO in 1970 and was the youngest player at the time.

The double bassist called the “BSO At Home” video concept “a well-thought out challenge from BSO management.” On the issue of layoffs he was optimistic, and said, “the BSO management has been is well-noted in the industry as being musician-friendly.”

Right now Wolfe is more concerned about Boston and the world holding up when our support systems feel like a house of cards. “I do believe in the collective goodness of humanity,” Wolfe said, “and we'll get through it together, through cooperation or by living in concert — if you will.” The musician feels it's his responsibility to give back to the community, and plans to do just that as he talks to his virtual audience.

When we spoke Wolfe wasn't quite sure what he'd play or say in his videos. Then a lightbulb went off, and he asked if I knew the term jazz term “walking bass.”

“You've heard it a million times,” Wolfe said, “It kind of outlines the beat as well as the harmony.”

Turns out the musician has a travel wheel for his huge instrument. “What if I would just walk [around] my neighborhood with a camera strapped to my head or something?” Wolfe asked with a laugh, “playing as I go, just seeing who I can get out of the house?”